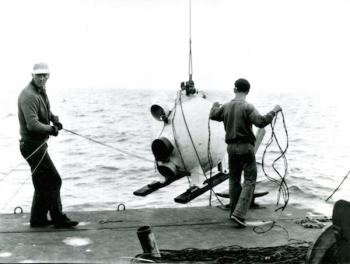 Benthoscope containing marine scientist Otis Barton as it is lowered into the sea. Trying for a record 6,000-foot dive he was forced to be raised to the surface from a depth of 2,500 feet due to faulty electrical cables.
Santa Cruz Island, August 15, 1949 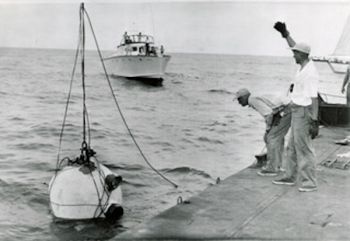 Test plunge. Dr. Barton peers at Benthescope, Dr. Nellis signals. Preparation for a dive to ocean depths 6,000 feet down—deeper than man has ever before descended—are shown in these pictures taken off Santa Barbara, Cal. Dr. Otis Barton, who dived 3,028 feet off Bermuda with Dr. William Beebe some years ago, expects to make the descent in his Benthescope, a $15,000 steel sphere five feet in diameter and weighing 7,000 pounds. Aim: To find untapped supplies of food, oil, geological data. 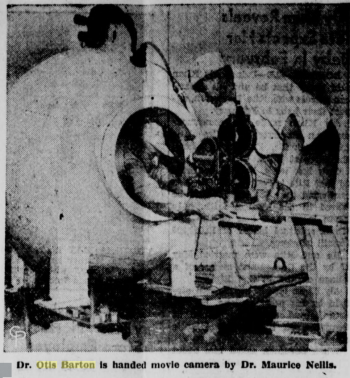 August 15, 1949 [Madera Tribune]: “Aboard Velero IV, off Santa Cruz Island—Dr. Otis Barton today abandoned his attempt to set a new deep sea diving record when a faulty power cable caused the lights of his Benthoscope to fail and left him in inky blackness 2,300 feet below the surface. The 48-year-old Boston scientist, a veteran underseas explorer, started his dive to the bottom of the 6,000-foot Santa Cruz basin at 10:39 a.m. but was forced to give up and return to the surface when salt water shorted out his power cable through a break in the insulation. The big white-painted steel sphere was halted just 728 feet short of the existing depth record set by Barton and Dr. William Beebe off Bermuda in 1934. Reluctantly ordering his assistants to haul him back up from the 2,300 foot level, Barton said "it would be a farce to go on without lights." The scientist first ran into trouble at the 850 foot mark at which point he reported that his lights had faded out. He said he believed he would make another attempt as soon as the trouble could be fixed but added he could make no estimate as to how long that would take. He said the worst part of the dive was a recurring sensation of turning over, caused by insufficient flow of oxygen. "I had a feeling two or three times that the ball was turning over," he said. "I didn't like it.," he added with a grin.”