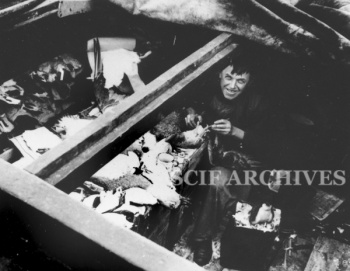 BECK, Rollo Howard (1870-1950), born at Los Gatos, Santa Clara County, California August 26, 1870, Beck was a life member of the American Ornithologists’ Union and collector of bird skins and eggs who visited at least two of the Channel Islands. Despite an education through part of the eighth grade, Beck went on to become one of the best known bird and reptile collector of his time. In 1894 he joined the American Ornithologists’ Union and Cooper Ornithological Club (now Society), befriending other ornithologists both locally and nationally. He became a life member in 1919.

They had no children.

Herpetologist John Van Denburgh named the San Miguel Island form of Western Fence Lizard in his honor, Sceloporus becki. Beck’s collections are in the California Academy of Sciences, American Museum of Natural History and Santa Barbara Museum of Natural History. Beck published a series of short notes in the Nidiologist and in Condor, the Bulletin of the Cooper Ornithological Club in 1893, 1895-1901, and 1907.

Between 1897 and 1906 Beck made four collecting trips to the Galapagos on behalf of the California Academy of Sciences. The 1905 expedition set sail from San Francisco in June in the schooner Academy which had been purchased and rechristened for the purpose. The scientific staff consisted of eight young men, including, Rollo Beck, who led the team. Alban Stewart went as botanist; W. H. Ochsner as geologist; F. X. Williams as entomologist; E. W. Gifford and J. S. Hunter went to collect and study birds; J. R. Slevin and E. S. King looked after reptiles. Enroute to Ecuador in 1905, they stopped and collected on the Mexican islands of: San Martin, San Geronimo, San Benito, Cedros, Natividad, San Benedicto, Socorro and Clipperton islands.

In 1920, Beck and his wife Ida set off on a voyage across the Pacific to collect bird specimens for the American Museum of Natural History. They returned with over 40,000 bird skins and a large anthropological collection. As a collector, Beck was noted for his beautiful symmetrical skins of sea birds and waterfowl.

Beck died November 22, 1950 at the age of 80 at Planada, Merced County, California. His egg collection is located and the Western Foundation of Vertebrate Zoology. Several birds are named in his honor, including the California burrowing owl (Speotyto cunicularia becki) and Beck’s Petrel (Pseudobulweria becki), once thought to be extinct, but rediscovered and confirmed in 2008 near Papua, New Guinea.

» Dumbacher, John P. and West, Barbara Collecting Galapagos and the Pacific: How Rollo Beck Shaped Our Understanding of Evolution, Proceedings of the California Academy of Sciences, Series 4, Vol. 61, Supplement II, No. 13, pp. 211-243, September 2010

NOTE: On July 19, 1905, Beck was apparently on Isla Natividad in the company of J. S. Hunter, who collected CAS MAM 2471, another Peromyscus maniculatus geronimensis.

BECK, Rollo Howard “Born at Los Gatos, Santa Clara County, California, August 26, 1870. One of the most active, energetic and experienced filed collectors of the present day. Well known from his beautifully prepared skins of water fowl and sea birds which he has collected for the California Academy of Sciences, the Museum of Vertebrate Zoology, and the American Museum of Natural History during extended field work at Monterey Bay and in the San Joaquin Valley, California, on the Galapagos Islands, along the southern coasts of South America, and in the South Pacific. His name is associated with California birds in the designation of a Burrowing Owl Speotyto cunicuaria becki Rothschild and Hartert, a synonym of Speotyto c. hypogaea; and in that of a Sharp-tailed Sparrow, Ammodramus c. becki Ridgway, a synonym of Passerherbulus nelsoni.”