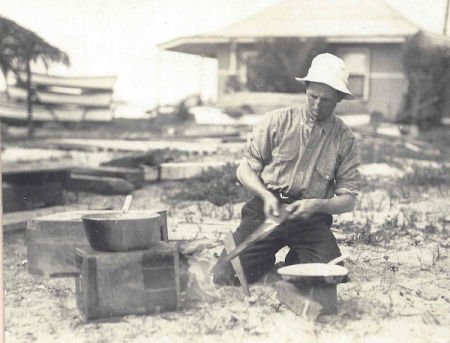 BEEK, Joseph Allan (1880-1968) was born on December 16, 1880, in Orrington, Maine. For 55 years he served as secretary to the California State Senate. In 1919, Beek,a college student at Pasadena City College, was granted permission from the city of Newport Beach to begin a ferry service between Balboa Island and the Balboa Peninsula. With his original ferry. The Ark, he shuttled passengers from Balboa Island to the mainland for five cents. The Ark consisted of a giant rowboat with a small engine. The Ark carried oars in the event of engine failure. There was no regularly scheduled service and customers telephoned Beek when they needed a ride across the harbor.

His second vessel, three years later, was Fat Ferry, which carried up to 20 passengers. Beek soon added a one-car barge that was pushed by his ferry. The charge was 10 cents for a one-way trip for a car.

In 2017 the ferry service contract is still held by the Beek family, so they are now getting close to their 100th anniversary. The present three 64-foot ferry boats, built in the 1950s, each ferry hold three cars and 75 people: the Captain, Commodore, and Admiral. Their top speed is 4 mph, and it is estimated that these boats have made this 1,000-foot crossing about 22,500 times every year since then. That means that each of these ferry boats has traveled far enough to have gone around the world more than seven times. The ferry was featured in the 1949 movie The Reckless Moment starring James Mason and Joan Bennett.

July 2, 1922 [LAT]: “Captain Joseph Allan Beek, who recently returned from a scouting expedition to San Clemente Island and to the rocky shoals near Catalina Island, is preparing for one of the busiest seasons in the history of Balboa Bay. He is port captain of the Newport Harbor Yacht Club and as harbor master of Balboa, his duties are to see that navigation is maintained as safely as possible.”

January 28, 2017 [TI/Avalon]: “Beek family: A lifetime of Catalina memories. Seymour Beek has a lifetime of Catalina Island memories. He first came to the Island at the age of 5 with his father, who owned the historic Balboa Island Ferry that transports vehicles and passengers between Newport Beach and the popular island getaway. He remembers kids diving for coins tossed into Avalon Bay by passengers on the old steamboat. He recalls returning to Catalina’s Moonstone Beach after World War II and finding it littered with debris from military training operations, and he reminisces about endless days of enjoyment aboard his father’s boat and his own boat with his five children. “I have so many memories of fishing, swimming, diving, snorkeling and hiking on Catalina Island,” he said. “I must have hiked up Whitley’s Peak 50 times,” Beek said. Beek wants his grandchildren and great-grandchildren to have their own memories of idyllic summers on Catalina. So he became one of the earliest members of the Catalina Island Conservancy after it was formed in 1972 to protect and restore 88 percent of the Island. He said he’d witnessed the growth in Avalon and Two Harbors and heard about plans to develop other parts of the Island. He’d also seen the goat trails carved into Catalina’s hillside and the damage to its vegetation caused by the grazing of non-native animals that roamed the Island before the 21st Century. “It was obvious there were certain things about the Island that were deteriorating,” he said. “There was a general consensus that if someone took care of Catalina, it would be better.” Beek lives on Balboa Island, where he operates the Balboa Island Ferry, a family-owned business his father founded in 1919. But he still travels often to Catalina, and he credits the Conservancy with important improvements in the landscape and protection for the Island’s open space. “The Conservancy does good things, and it takes care of the Island,” he said. “Membership in the Conservancy is important for anyone who cares about the Island. It’s a worthy cause and a good thing to belong to and support.” Members’ dues help save animal and plant species on the verge of extinction and maintain unique habitats for all to enjoy. Members also have access to Conservancy venues, like the Wrigley Memorial & Botanic Garden; discounts on a number of services, like the Wildlands Express and popular Jeep Eco Tours, and information about the Conservancy’s popular events and the opportunities it sponsors to explore and experience Catalina and the other Channel Islands. Beek said he’s attended the Annual Conservancy Ball twice and considers it a rare chance to dine and dance in the historic Avalon Casino ballroom. He also participated in several Conservancy events, including a boat trip to Santa Cruz and two of the BZ Jones hikes across Catalina. “I do a fair amount of hiking,” he said. “But on the BZ Jones Hike, I saw parts of the Island I had never seen before, and the Conservancy treated us like royalty. It’s been a lot of fun to be a member,” Beek said.”