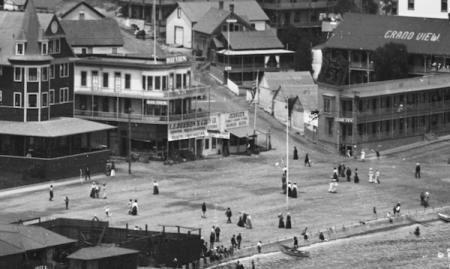 BEESON, Eugene E. (1860-1928) was born in Delaware. In 1893 Beeson and his younger brother, Willard, built the Bay View Hotel and opened and operated a grocery store, E. E. Beeson & Co., general merchandise, bakery & delicacies. It was located on Crescent Ave. at the corner of Whittley Ave., across the street from the Grand View Hotel. The hotel burned in the 1915 Avalon fire.

In the 1900 census, Eugene and Lulu Beeson, and their 13-year-old daughter, Vena, lived in Avalon along with Willard Beeson, Eugene's younger brother, 5 years his junior.

By 1908, the Beesons also owned a home in Highland Park, Los Angeles at 5428 Pasadena Ave.

In 1915 Eugene Beeson was still managing his the Bay View Hotel where his store was located. It burned later that year in the fire.

August 11, 1896 [LAH]: “Santa Catalina. Avalon, Aug. 20.—The crowds continue to arrive and one can hardly keep up with events happening every twenty-four hours... Masters Willie and George Cline, at a popcorn party in their pretty cottage tent, corner of Seventh Street and Sumner Avenue, had as guests Joe and Katherine Banning, Geo and Meta Patton, Banning and Harry CLine, Chas. Stoll, Veva Beeson and Gordon Traver...”

August 11, 1904 [LAH]: “Avalon summer girls surprise Y.M.C.A. Merry Parties picnic at Isthmus. Avalon, Aug. 10.—Equipped with ten gallons of ice cream and half a barrel of homemade cake, a score of pretty girls left here this morning for White's Landing, where they will tender a surprise party to the Pasadena Y.M.C.A. boys who are in camp there. Among the young ladies are many of Avalon's most prominent "summer girls" who represent well-known families throughout Southern California. In the party were the following...Miss Veva Beeson... ”