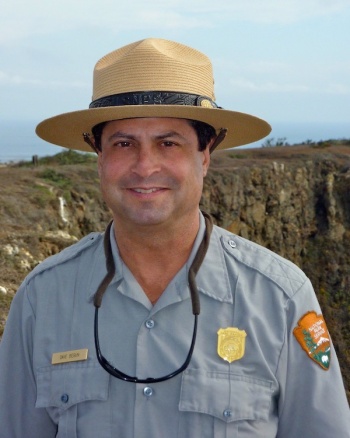 BEGUN, David (b. 1960) is a former Park Ranger for Channel Islands National Park. Begun was born 1960 in Cleveland, Ohio, and moved to southern California in 1967. He received his B.A. degree in journalism from San Diego State University in 1982. In 2010 Begun received his certificate in parks and recreation management from Dakota College, Bottineau, ND.

In addition to the five park islands, Begun has visited Santa Catalina Island many times; been to San Nicolas Island twice volunteering for environmental projects with the navy; and once to San Clemente Island with Steve Junak helping with plant surveys.

In 1996 Dave Begun became member #41 of the All 8 Club. In addition to the eight California Channel Islands, he spent time doing a one-month internship on Southeast Farallon Island with PRBO [now Point Blue].

April 16, 2004 [nps.gov/chis/learn/news/]: “Ventura County resident David Begun has been selected as the National Park Service (NPS) Pacific West Region recipient of the George B. Hartzog, Jr. award for Outstanding Volunteer Service. Begun has been a volunteer naturalist at Channel Islands National Park since 1984. Park Superintendent Russell Galipeau will present this prestigious award at 5:00 p.m. on Tuesday April 20, 2004. This recognition takes place during “National Park Week” and is open to the public at the Robert J. Lagomarsino Visitor Center, located at 1901 Spinnaker Drive in Ventura Harbor.

George B. Hartzog, Jr., the Director of the NPS from 1964-1972, was instrumental in creating the NPS Volunteer-In-Parks (V.I.P.) Program. Hartzog said, “When a V.I.P. agrees to share his talents, skills and interests with the NPS, he is paying us one of the highest compliments possible by offering a most valued possession-his time.” Since 1995, Volunteer Begun has gone beyond the normal call of duty and contributed over 6,600 hours of his “most valued possession.”

Over the past decade, Begun has assisted the public in learning about the park as he answered questions at the mainland visitor center, hosted park displays at numerous special community events, as well as led hundreds of interpretive hikes on all five of the park islands. During multi-day tours on the remote islands, he also helps with routine maintenance and resource management duties and occasionally responds to emergencies. In summer 2001, Begun was directly responsible for saving the lives of two kayakers stranded in rough seas in a sea cave along the coast of Anacapa Island.

Begun’s love of the sea is long-lived as he has been sailing and diving in the Santa Barbara Channel most of his adult life. He grew up in the San Fernando Valley, graduated from San Diego State University with a degree in journalism, and has worked in Westlake for the past 20 years as an Executive Search Consultant. He boasts of being a member of the “All Eight California Channel Island Club,” having visited all of these treasured resources.

Park Superintendent Russell Galipeau stated, “David is one of the most articulate and knowledgeable naturalists working at the park. Visitors consistently call and write letters expressing their appreciation for him. Park staff feel that he is one of the finest and most dedicated volunteers in the service.”