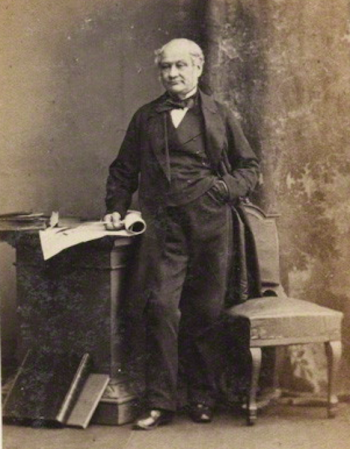 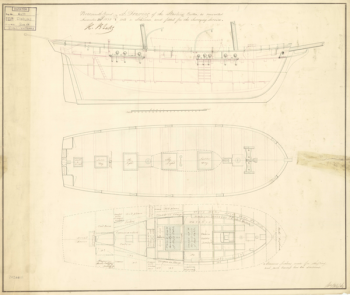 HMS Starling was a 4-gun schooner of the British Royal Navy, one of the two ships in an expedition led by Edward Belcher to survey the Pacific coast of the Americas.

BELCHER, Sir Edward (1799-1877), British naval commander, born in Halifax, Nova Scotia, Canada. He entered the navy in 1812, and later explored the west coast of America (1836-1842). Belcher was in commanded of the British vessel of war, Sulpher, in 1839 when he anchored at Yerba Buena during an exploration of the Pacific Ocean. That year in the account of his voyage, Sir Edward Belcher commented on the strong scent of asphaltum in the Santa Barbara Channel from both the shore and occasionally aboard ship, where the smell was “experienced quite far from land” [Bancroft Vol. 1: 320].

In 1867, ten years before his death, he was knighted. Of charts of the California coast, Henry R. Wagner states: “In the main, any chart must have derived from those of Vancouver, with such modifications as had been introduced by Captains Beechey, Hall and Belcher.”

From 1830-1833, Belcher was married briefly to Diana Jolliffe (1800-1890), stepdaughter of Captain Peter Heywood. The marriage ending upon her application for legal separation for his having infected her with venereal disease.

A highly venomous Southeast Asian and Australasian seasnake, Belcher's seasnake, Hydrophis belcheri (Gray, 1849), is also named in his honor. Belcher collected the holotype which is housed in the Natural History Museum, London.

Santa Barbara historian, Clifton Smith, speculated the name of Bechers Bay on Santa Rosa Island may have originally been named Belcher's Bay, and the ensuing spelling confusion resulted in both spellings Bechers and Beechers Bay.

BELCHER, Sir Edward, Captain and later Rear Admiral, British Navy “Born in Nova Scotia in 1799; died in London, England, March 18, 1877. Belcher was appointed assistant surveyor on the Blossom in 1825, and was promoted to the rank of Commander in 1830. He was in command of H.M.S. Sulpher from November, 1836 to 1840. Both of these vessels made explorations in the Pacific, touched at ports in California, and brought home important natural history collections. Among other reports Belcher published in 1843 a Narrative of a Voyage Round the World performed in H.M.S. Sulpher 1836-42. In compliment to him a supposed new species of gull was named Larus belcheri, but this designation is now considered a synonym for Larus hermanni.”

Captain Sir Edward Belcher. Narrative of a Voyage Round the World Performed in Her Majesty's ship Sulphur during the years 1836-1942, including details of the naval operations in China, from Dec. 1840 to Nov. 1841:

“On the 5th of October [1839] we reached Monterey, having parted from the Starling and experienced fresh breezes. However, knowing my ground well, I had no hesitation in anchoring. We succeeded in completing our observations, and beat out the following morning.

As my first rendezvous was Santa Barbara, I sought the Starling in that direction, where I found her cruising to intercept me. Off this part of the coast we experienced a very extraordinary sensation, as if the ship was on fire, and after very close investigation, attributed it to a scent from the shore, it being much more sensible on deck than below; and the land breeze confirming this, it occurred to me that it might arise from naphtha on the surface. Vancouver notices the same smell.

We reached our anchorage in the bay of Santa Barbara about nine on the night of the 9th, having been assisted by lights displayed on board one of the vessels, to which I had despatched a boat before dark. At sunset we were unable to discover the bay, and could barely distinguish a long, low, yellow line spitting to the southward and terminating abruptly. This eventually proved to be the high yellow cliffs of the western head, at least fifty feet above the sea.

The customary guide in approaching the coast is the “kelp line,” which generally floats over five to seven fathoms. So long as a vessel can keep on its verge there is no danger; this is the general opinion of those who have navigated this coast during their lives, and out observation has tended to confirm it. I know, however, that less than two fathoms have been found within it, barely at its edge. It is the fucus giganteus, and sufficiently strong to impede steerage, if it takes the rudder.

The mission at Santa Barbara is situated on an elevation of about two hundred feet, gradually ascending in about three miles from the sea. The town is within a few hundred yards of the beach, on which the landing is at all times doubtful. The bay is protected from northerly and westerly winds, which prevail from November until March, and the swell is in some measure broken by the islands of Santa Cruz, Santa Rosa and San Miguel, to the westward. In March the southwesters blow with fury, which is contrary to the seasons southward of Cape San Lucas. Even during the fine weather months, vessels are always prepared to slip when the wind veers to S.E., from which point it blows with great violence, but soon expends itself.

We were fortunate in landing comfortably, and by four o'clock, nothing of interest detaining us, we moved on towards San Pedro... Having completed this bay, we moved to the bay of San Juan, despatching the Starling, assisted by a cutter and mate, to examine the island and anchorage of Santa Catalina; rejoining us at San Diego...” [Chapter XIV, p. 320-324]