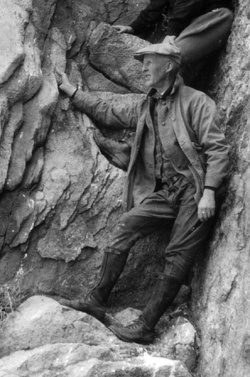 BENT, Arthur Cleveland (1866-1954) was a successful businessman who became interested in birds during his childhood in Massachusetts. In 1901 he began submitting papers to Auk, the publication of the American Ornithologists’ Union, and making important ornithological contributions. In 1910 at the request of the Smithsonian Institution, Bent began work on The Life Histories of North American Birds, a 21-volume project to which he devoted the remainder of his life.

Bent became a member of the Cooper Ornithological Club in 1909. He became a life member in 1922. His address is listed as 140 High St.,Taunton, MA.

June 2, 1914 [SBDNI]: “Professor A. C. Bent of Taunton, Massachusetts, connected with the Smithsonian Institute, arrived in Santa Barbara last evening with J. Eugene Law, president of the Cooper Ornithological Institute, to spend two weeks studying the birds of the Channel Islands. Each summer for years professor Bent has been assigned to some part of the country to search out bird lore, and this season he is booked for California, his first research to be made on the islands. From there he will visit the various mountain canyons and get a line on the mainland birds… The two scientists are accompanied by their wives and will make their headquarters on Santa Cruz Island, while cruising from island to island.”