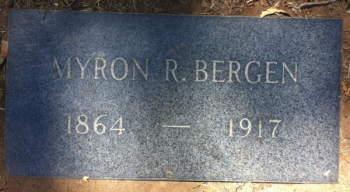 BERGEN, Myron Russell (c.1865-1917), Illinois-born married man who accidentally drowned at Pelican Bay, Santa Cruz Island on July 11, 1917 at the age of 52. His cremated remains are buried in the Santa Barbara Cemetery.

July 17, 1917 [SBMP]: “Myron R. Bergen, for the past ten years well known in this city as an upholsterer, was found drowned at Pelican Bay Sunday morning, and thus far the cause is enshrouded in mystery. A week ago last Sunday Mr. Bergen went to Pelican Bay with Captain Ira Eaton in the Sea Wolf. Staying ashore during the day, at night he slept in the cabin of the boat, with men who constituted the crew, the captain sleeping ashore. Mr. Bergen went to bed Tuesday night, but the next morning he was not aboard. Captain Eaton concluded that the missing man had gone ashore during the night and walked to Fry's Harbor, as he said he would go there when Captain Eaton returned to Santa Barbara. Following the plan already made, Captain Eaton returned to the mainland Wednesday and then made the voyage to San Miguel Island, returning home Sunday. Yesterday he again went to Pelican Bay, arriving there at 1:30 P.M. On his arrival he learned from Captain George Nidever, whom he had left as a caretaker at the Pelican Bay camp, that the body had been found floating in the kelp near the boat landing the preceding morning. Captain Eaton returned at once to the mainland and notified Coroner Ruiz... Captain Eaton says that the water in which the boat lay last Tuesday night was smooth as a millpond. Mr. Bergen was very fond of water, a good swimmer and a very ardent admirer of Santa Cruz Island, which he visited frequently every summer. He was a quiet, genial man who made friends wherever he went, and his tragic end will arouse deep sympathy for his bereaved wife and daughter. He was a native of Illinois, aged 52, and his family resides at 519 East Pedregosa Street.”

July 17, 1917 [SBDN]: “At three o’clock this afternoon, the coroner returned from Santa Cruz Island with the body of Myron R. Bergen, who met his death there by drowning. The coroner’s jury, which met at the island today, returned a verdict of accidental drowning. The funeral was to be held this afternoon with services conducted by Rev. George C. Wright of the Baptist church who officiated in the absence from the city of Rev. S. R. Shaw, pastor of the Christian church of which Mr. Bergen was a deacon. Coroner A. M. Ruiz and L. E. Gagnier, undertaker, went at five o’clock this morning to Santa Cruz Island, to inquire into the death of Myron R. Bergen, well known upholsterer, whose body was found Sunday by Captain George Nidever, floating in the ocean at Pelican Bay. Mr. Bergen had been missing since Tuesday of last week. He had gone to the island to camp for a vacation with Captain Ira Eaton, and had spent his days ashore and his nights on Eaton’s powerboat, the Sea Wolf, until last Tuesday, when he disappeared. As Bergen had talked of walking to Friar’s Harbor, Captain Eaton supposed he had started on that jaunt, and thought nothing more of the matter. Mr. Bergen was well acquainted with the island. Captain Eaton arrived at Pelican Bay from this city yesterday afternoon at 1:30, and was told by Captain Nidever of the finding of the body. He at once put back to Santa Barbara to notify Coroner Ruiz. Because of the lateness of the hour of his arrival, the return to the island with the coroner and undertaker was not made until daybreak today. Mr. Bergen was a good swimmer and fond of the ocean. It is believed his death came through a sudden cramp while in the water alone. The deceased was a native of Illinois, 52 years old. He had resided in this city for the past 10 years, and was well known in business circles, having been in the upholstery and awning manufacture business here. He resided at 519 East Pedregosa Street with his wife and daughter. The remains are expected to arrive here late this afternoon, when arrangements for the funeral will be completed.”

July 17, 1917 [OT]: “Santa Barbara, July 17. M. R. Bergen, 52, a local business man, was drowned last week at Santa Cruz Island. His disappearance from a yacht was a mystery until today, when the body came to the surface.”

July 18, 1917 [SBMP]: “That Myron R. Bergen, whose dead body was found in the water at Pelican Bay last Sunday morning by George Nidever, met his death by accidental drowning was the verdict of the jury in the coroner’s inquest held at the scene of the tragedy yesterday forenoon. Coroner Ruiz, Jacob G. Shoup and George Sanders, the last named representing L. E. Gagnier, the undertaker, went to Pelican Bay in the Sea Wolf with Captain Eaton yesterday morning for the purpose of holding this inquest and bringing home the remains. Captain C. F. Miller, owner of the schooner yacht Yankee, was at the bay, and he and two of his crew helped to fill the jury… There was no evidence adduced at the inquiry that threw any light on the way in which the deceased got into the water from the Sea Wolf, in the cabin of which he went to bed last Tuesday night, and there only remained he surmised that he had got up in the middle of the night and gone above for a walk about the deck, and that in some sort of attack he had fainted and fallen overboard. As explained in yesterday’s issue of the Press, when Mr. Bergen was found not aboard the Sea Wolf, Captain Eaton supposed he had gone ashore during the night and walked to Fry’s Harbor, as he had stated he might do…”

July 18, 1917 [SBDN]: “The funeral of Myron R. Bergen, who was accidentally drowned at Santa Cruz Island last week, was held yesterday afternoon at Santa Barbara cemetery immediately following the arrival of the remains from the island. It was believed best to have immediate interment after the arrival of the body on the mainland. The services were conducted by Rev. George Wright of the Baptist church in the absence of Rev. S. R. Shaw, pastor of the Christian church of which the deceased was a member. The quartet from the Christian church choir sang at the services.”