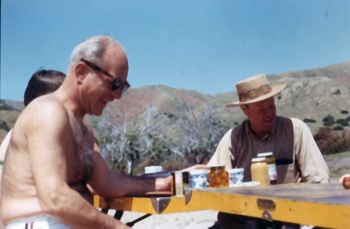 Dick Bergen with Carey Stanton and others on a picnic at
Coches Prietos, Santa Catalina Island

BERGEN, Richard Cheney (1914-1992) [SS#555-18-6534], partner in the Los Angeles law firm of O'Melveny & Myers who represented Edwin and Evelyn Stanton, and also their son, Carey beginning after World War II. Bergen began with the law firm in 1939, and retired in 1978. It was through founding partner, Jack O'Melveny, that Dick Bergen first met the Stantons. Among other things, Bergen drew the Stantons' wills and executed the deal between the Santa Cruz Island Company and The Nature Conservancy in 1978, after which he retired. David D. Watts then became Carey Stanton's attorney and executor, while Dick Bergen and his wife, Rosemary (1917-2000) remained close personal friends of Carey Stanton.

Bergen died on May 3, 1992 after returning from the day on Santa Cruz Island to attend the Feast of the Holy Cross, celebrated annually in the island’s chapel.

March 11, 1992 [SCIF Oral History excerpts]: “Jack O’Melveny and his wife, Corinne, were relatively prominent socially, businesswise, and other wise in Los Angeles. They became friends with the Stantons and people comperable to them and their social standing, and they did things around town. Ed Stanton was a very forceful personality, and a very delightful personality and great sense of humor and a fun person to be with and socialize with. There was a man named Spike Salsbury who represented the Stantons before we did. On his death, Ed Stanton went to Jack O’Melveny. Jack brought me in from the inception. My first meeting with Edwin, Sr. involved his will, This was after his son was killed during the war. [The island] was their major holding, although they had other assets and incomes which allowed them to live well. I’m sure Carey was involved with the island [1957] when I came into the picture, because they were committed to Carey taking over the island at the time of their demise. They basically wanted Carey to have 2/3 interest and control of the island and their whole estate. Their grandson, Carey’s nephew, Eddie, Jr. was to have 1/3. That was their basic estate planning. They hoped, of course, that the two would get along and, unfortunately, they didn’t. It was my first meeting with Evelyn [Mrs. Stanton] — I remember it was a very warm August day — as we get occasionally in Los Angeles, and their big Hancock Park house had no air conditioning in those days. I came out dressed as a young lawyer dressed in those days. We sat down in the living room and chatted for awhile, and I finally said, ‘Evelyn, would you mind if I took off my coat?’ She said, ‘I don’t mind at all. Take off your pants if you want to.’ So that broke the ice and we got along just fine.”