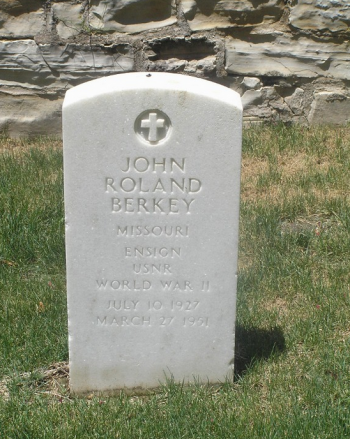 BERKEY, John Roland (1927-1951), born in Missouri, was killed on San Clemente Island on March 27, 1951 when the Grumman-Guardian he was piloting crashed. Also killed in the wreck was James H. Smith. Crewman R. K. Akutagawa, 20, survived.

April 5, 1951 [Coronado Eagle and Journal]: “Ensign John R. Berkey dies in air crash on San Clemente Island. Ensign John R. Berkey, 23, of 717 G Avenue, died in the wreck of a Grumman-Guardian Navy plane, of which he was the pilot, Tuesday night last week on arid and lonely San Clemente Island, about 65 miles from North Island. The plane, with two other Navy men aboard, took off from the NAS on a routine off-shore anti-submarine training flight. For a time it was reported missing, until R. K. Akutagawa, 20, crew member from Sal Lake City, Utah, was rescued from the surf of the island last Thursday by fishermen and then brought back by the destroyer Lafferty. Akutagawa is expected to recover. James H. Smith of Denver, apprentice seaman, the third man in the plane, was reported killed along with Ens. Berkey.”