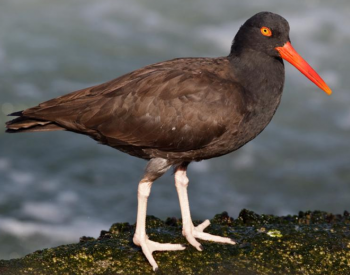 1903 Anacapa Island: “On the 4th of September, 1903, I was landed from a yacht onto Ana Capa Island... My stay on the Island was limited to less than an hour; but besides that I was permitted to coast along nearly the whole length of the island in a small boat....Besides the usual seabirds of the region I saw the following: one pair, with three two-thirds grown young, of the Black Oystercatcher (Hæmatopus bachmani) on a point of rocks jutting into the surf...”
Grinnell, Joseph Some Birds of Ana Capa Island The Condor 10(3):130, May-June 1908

1907 Santa Cruz Island: “Haematopus bachmani. Black Oystercatcher. December 1 to 8 seven specimens were seen and five secured, at Northwest ,Harbor. They were always observed on the outer rim of volcanic rocks standing in the surf, or on the rocky ‘‘islands’’, and were hard to secure. The feet and legs of specimens taken, are pale flesh color instead of red as in breeding season. On December 3 I shot an oystercatcher which fell in the heavy surf. Unable to secure it myself I had started tentward for my retriever when I was greatly chagrined to see a bald eagle swoop down, gather in my prize and carry it away.” [“At 11:30 p. m., November 19, 1907, my father (H. Linton), Mr. George Willett, and myself left San Pedro harbor in a dilapidated fishing smack and in company with a crawfisherman, one “Cold-foot” Jorgensen. We arrived off the south end of Santa Cruz Island at 10:30 the following day during a stiff norwester. For various reasons we were unable to make camp until the 22nd. It may not be amiss to state here that twice during the blow we were nearly wrecked: once while at anchor in Potatoe Harbor, a broken anchor allowing the boat to drift within the breaker line and nearly onto the rocks. In this instance the timely arrival of Willett and H. Linton in a small boat, saved the day, and incidentally the fishing smack. At another time (the engine having broken down) we were blown nearly onto the rocks of Anacapa Island; but with father at the wheel and Willett and I on the “sheet” we managed to hold her off. I mention the foregoing, and the many sleepless nights spent on the rocky shores, “running” the surf several times each day (with attendant duckings), etc., merely as a warning to those who seem inclined to believe a field naturalist’s life “strewn with roses”. (Its ’ generally strewn with cacti!)”]
Linton, C. B. Notes from Santa Cruz Island] The Condor 10(3):124-129, May 1908

1913 Isla San Martin: “Haematopus bachmani. Black Oystercatcher. Fairly abundant along sheltered portions of the shores. Several found on a little lagoon on the east side. They appeared to be breeding but no nests were found.” Wright, H. W.The Birds of San Martin Island, Lower California The Condor 15(6):207-210, November-December, 1913