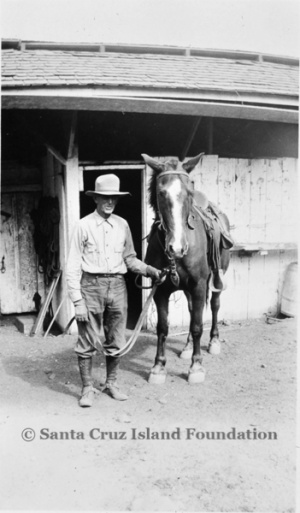 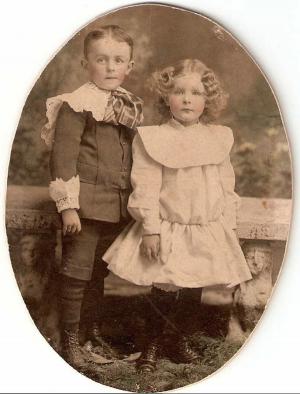 In 1918, the government lease was reassigned to the San Clemente Sheep Company. E. G. Blair was the largest stockholder, president and manager. Seven directors governed the corporation: A. J. Huneke, F. Pierce, B. M. Stansbury, W. B. Merwin, G. W. Parsons, C. S. Gilbert and F. E. Bennett. Capital stock was $250,000 divided into 2500 shares to be sold or disposed of as the board determined.

In 1934 the leasing of San Clemente Island was discontinued, and sheep operations ended as the Navy’s administration of the island began.

blair'ii: after Erwin (or Erve) Grant Blair (1865-1965), sheep rancher in Park County, Montana, before moving to southern California about 1913. He raised sheep on San Clemente Island. "Philip A. Munz, then of Pomona College, made a notable visit to the island from April 8-12, 1923, accompanied by F. W. Peirson, D. D. Keck (at that time a student at Pomona), Dr. J.G. Needham (Munz's professor at Cornell, then on a visit to California), and five others. Dr. Munz obtained Nos. 6600-6789 on the island (including cryptogams), Peirson Nos. 3416-3487; the others apparently did not collect. Nearly all of Munz's (POM) and Peirson's (RSA) collections are cited here. The party landed at Wilson Cove, circled the north end dunes, and the next day set out by wagon for the south, camping near Lemon Tank and then working the canyons on both sides of the island to the vicinity of Middle Ranch and Thirst. They were materially aided in their efforts by Mr. E. G. Blair, in charge of the sheep company operations at the time; he even gathered flowering material of Munzothamnus for them the following autumn."...(from Peter Raven, A Flora of San Clemente Island, 1963) (ref. Munzothamnus [formerly Stephanomeria] blairii)

April 27, 1916 [LAT]: “Announcement was made yesterday at the Van Nuys by Lewis Penwell, who recently leased San Clemente Island and purchased the 25,000 sheep and other livestock there, that a $300,000 corporation will shortly be formed to develop the island and the stock into the finest sheep ranch in the country. Mr. Penwell, who is sometimes called the ‘Sheep King of America,’ will go to the island tonight or tomorrow with Charles T. Howland, one of the former owners of the property. The plan of development for the island, according to Mr. Penwell, includes among other things the addition of about 5000 sheep of the Rambouillet type to the stock already there. The new animals are expected to cross with the peculiar island type of sheep now on the ranch, and to make the herd one of the most valuable in the land, as it is believed the mixed strain will produce animals of excellent wool and meat value. Regarding the incorporation, Mr. Penwell stated yesterday that very little of the stock remains unsubscribed, most of it being taken in advance by himself and his associates, including Charles T. Howland, who will be actively identified with the corporation. The money realized will be used to purchase sheep and for improvements. E. G. Blair, who will manage the ranch for the corporation, is at present on the island, with Robert Knowland, engaged in gathering the sheep, shearing, weeding out undesirable stock and making a final count. The work is expected to be completed Saturday night and plans will immediately be made to secure additional sheep. Additional fencing will be done shortly and a preliminary survey of improvements started...”

April 12, 1920 mammalogist Joseph S. Dixon wrote: “We left at 1:40, reaching Wilson Cove, San Clemente Island, 3 hours later. The island headquarters of the San Clemente Sheep Co. are at Wilson Cove, and Mr. E. G. Blair, the president, welcomed us in person. Mr. Blair expected to go by team and wagon to Smugglers Cove in a day or two, but Captain Nelson arrived this morning from San Pedro with supplies, so he decided to go today and offered to take me down. It is some 22 miles by a very winding rocky wagon road…”

April 1, 1932 [San Pedro News Pilot]: “Coast Guard gives aid to sick man. U.S. Coast Guard patrol boat, CG-257, Chief Boatswain's Mate Stanley Megos commanding, performed an errand of mercy last night. It brought back a sick man, whose name, however, the Coast Guard did not learn, from the Blair ranch on San Clemente Island to the Fifth Street landing, San Pedro, where he was taken in charge by friends and relatives. The man, believed to have been an employee on the Blair ranch, was taken aboard by the 257 at Wilson Cove on the island.”