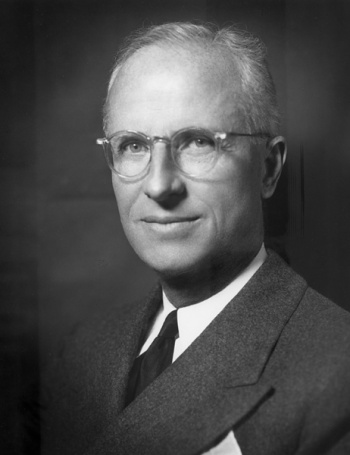 Blankenhorn was born to parents Louis Blankenhorn and Lillian Stevens, who had married in Milwaukee in 1881. David attended grammar and high schools in Pasadena, California. Interested in real estate, in 1908 he formed the David Blankenhorn Company. The following year he married Emma Peterson, and they had sons David, Jr. (1910-1992) and John (1913-1998). In 1914 he partnered with Mr. Robert E. Hunter under the firm name Blankenhorn-Hunter Company, a corporation with a capital of $300,000. In February 1919 additional partners, Garrettson Dulin and E. S. Dulin, were added to the firm. The company became one of the leading private banking and investment houses on the Pacific coast of its time.

In 1919, Blankenhorn and Hunter participated in the acquisition of the Santa Catalina Island Company with William Wrigley, Jr. of Chicago. Wrigley soon bought out both partners. Blankenhorn served as Company president in 1919-1920.

He was later remembered by Malcolm Renton:

“Although I was still a young boy attending school in Avalon when David Blankenhorn was president, I do remember a lot about him through my father’s relationship with him during the many trials and tribulations of the early-day operations and development. Mr. Blankenhorn was primarily a real estate promoter, being part of a large investment firm in Pasadena known as Blankenhorn, Hunter and Dunlin Company. In fact, it was originally David Blankenhorn who originally contacted Mr. William Wrigley, Jr. about the availability of the sale of the Santa Catalina Island Company. He was not an experienced operator for the many facets of a resort and landowner business, such as Catalina. He had to depend upon my father to keep the operation going as smoothly as possible. There were many times when the city ran out of fresh water and the antiquated sewer system would malfunction and overflow in the streets in the middle of the busy weekends. Mr. Blankenhorn’s interest in real estate sales caused him to proceed too fast in opening up and selling some of the choice Company properties that should have been retained for later development by the Company. Mr. William Wrigley, Jr. always regretted that the old Metropole Hotel site on Crescent Avenue was sold, as one of the first big sales, to the Boos Brothers Cafeteria people. Mr. Wrigley had ideas that this location should have been retained for a first class hotel facing the waterfront. I believe that David Blankenhorn was primarily a fill-in executive for Mr. Wrigley until a permanent person who knew Mr. Wrigley’s ideas and methods of operation could be selected. Such a man was a longtime friend of Mr. Wrigley in Chicago by the name of Joseph H. Patrick.” [Santa Catalina Island Company Water Lines, 3rd & 4th Quarters, 1977]. 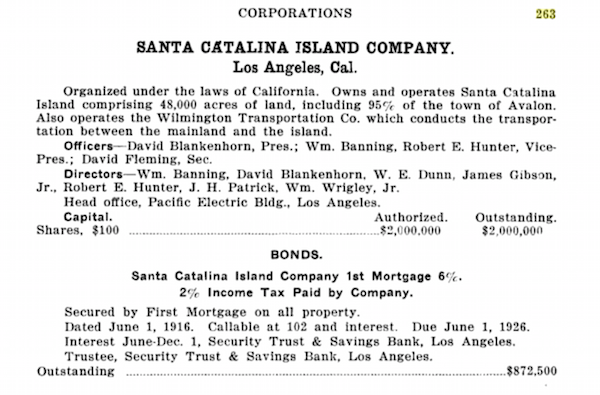 December 31, 1924 [TI/Avalon]: “'I have never seen Catalina Island looking so clean and so prosperous,'said Captain David Blankenhorn of Pasadena Sunday, after his tour of inspection to the different projects now under way by the Santa Catalina Island Company. Captain Blankenhorn was formerly president of the S. C. I. Co., after the Banning Brothers sold the property to Mr. William Wrigley, Jr. in February, 1919. Continuing, Captain Blankenhorn said: 'There is probably no greater team in Southern California than Messrs. Wrigley, Patrick and Renton. These three men are responsible for the remarkable progress and development at Avalon and the island in general; also for the wonderful steamer service now maintained by the Wilmington Transportation Company operating the steamers between Avalon and Port Los Angeles at Wilmington.”

July 4, 1935 [TI/Avalon]: “...Mr. Wrigley had heard much about the island, especially from his friend and associate, Joseph H. Patrick, who had often visited it and discoursed on its beauties. It remained for David Blankenhorn to present the proposition at the psychological moment when Mr. Wrigley, relieved of all kinds of problems and activities caused by the World War, was seeking other outlets for his energy and imagination. Blankenhorn knew that the owners of the island, the three Banning brothers, William, Hancock and Joseph, had suffered financial losses in the Avalon fire of 1915, and he also knew that they had an obligation of several hundred thousand dollars about to fall due. He visualized the island as a real estate speculation, and presented it to Mr. Wrigley on this basis. Mr. Wrigley was no speculator in the usual sense of the word. He was no buyer of commodities, securities or real estate on the theory that he could sit back and reap a profit out of some other man's work. But Catalina Island was now strictly in his line of business for he had, in order to give himself something to do and incidentally to have a place, which he could call his office, become a silent partner in the real estate firm of Blankenhorn and Hunter. Robert Hunter, the junior partner, was a son-in-law of John J. Mitchell, Mr. Wrigley's old friend. The firm's capital was not enough to swing the purchase of Catalina Island, but the partners persuaded Mr. Wrigley to put up whatever additional cash they might need. Thus, he committed himself to buy the island without having seen it. Several weeks later Mr. Wrigley, accompanied by Mrs. Wrigley, made his first trip to the island. One glance at it filled mind with all kinds of visions of what could be done with it. He told one reporter that he thought he was buying a flat piece of ground; here were mountains. To another reporter he told the story of his first night on the island. He and Mrs. Wrigley had a front suite at the Hotel St. Catherine. "We are both early risers; this morning Mrs. Wrigley was up first. She walked to the window and after a moment, called excitedly: 'I should like to live here.' I then came to the window. The sun was just coming up. I had never seen a more beautiful spot. Right then and there I determined that the island should never pass out of my hands." A day or two later, Mr. Wrigley talked to an Avalon reporter about his plans for the island: "Wile my motive for purchasing the island is largely a romantic one, I am going to leave no stone unturned to make it a refuge from worry and work for the rich and poor. Step by step, as business judgement dictates, and as the expert I shall put in charge advises, buildings and other improvements will be constructed. If Santa Catalina Island were on the Atlantic coast, you would have to guard it to prevent overcrowding. Ocean-going steamers would be chartered for scenic trips alone. In traveling over the world, neither I nor Mrs. Wrigley have ever found a more beautiful restful spot. I am happy. I want to make others happy. The development of Santa Catalina Island will be one of the greatest pleasures of my life."”