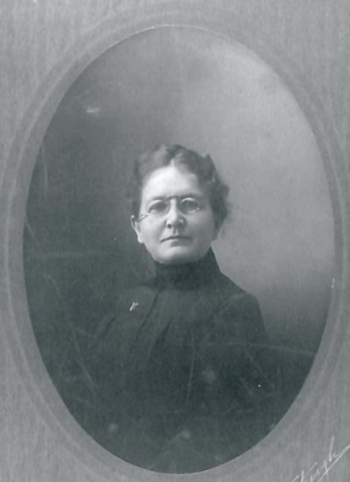 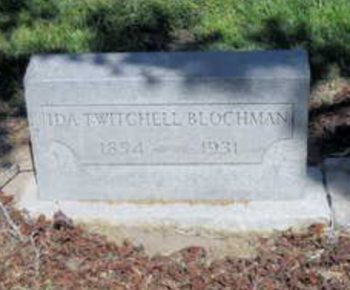 BLOCHMAN, Ida Mae Twitchell (1854-1931), Maine-born north Santa Barbara county teacher and botanist who collected extensively in the Santa Maria Valley. She was most active in the 1890s, and in 1893 she sent a large collection of plants to the World’s Columbian Exposition in Chicago. Several species are named in her honor, including Erigeron blochmaniae and Senecio blochmaniae.

On May 13, 1896, Ida Blockman and Alice Eastwood collected the type specimen of Dudleya blochmanae, named by Eastwood in Blockman’s honor.

After the Blochmans discovered oil on their Santa Maria property, they retired from professional life and moved to Berkeley in 1909 where Ida served eight years on the Berkeley Board of Education and 19 years as president of the Berkeley Charity Commission. In Berkeley, Lazar Blochman became a Spiritualist in the Berkeley bohemian culture. After Ida's death, he attended seances to communicate with her.

The Blochmans are buried in Santa Maria Cemetery.

June 8, 1893 [LAT/SB]: “News was received Monday of the safe arrival of the excellent classified collection of the wild flora of this county, on which Miss Ida M. Blockman of Santa María has been working for the past three years. It will be exhibited at the World’s Fair.”

July 8, 1893 [LAT/SB]: “Mrs. Ida M. Blockman’s collection of the wild flowers of Santa Barbara County is the only collection of the kind approaching completeness in the State building. It occupies a prominent position in the educational department, and is a very interesting and instructive feature. It contains about six hundred specimens, and is an excellent object lesson of the flora of Santa Barbara County.”

October 26, 1893 [LAT/SB]: “At last the commissioners for the Midwinter Fair from this county have been named… I. K. Fisher, Russell Heath, Delos M. Dimmick… Ida M. Blockman…”

January 1, 1895 [LAT]: “Mrs. Ida Blockman, a botanist whose reputation extends far outside the [Santa Maria] valley, has in her herbarium between 500 and 1000 distinct species of plants having their habitat in this valley.”

April 29, 1896 [LAT/SB]: “In many localities of this county the plant canaigre [Rumex] is a native. It is popularly known as wild rhubarb… Ida M. Blockman, a member of the County Board of Education, a botanist of considerable note, and constantly engaged in scientific research, who resides at Santa Maria, has been investigating this tanning plant and has sent root samples to Prof. E. W. Hilgard of the State University…”

June 10, 1896 [LAT/SB]: “Ida M. Blockman, a member of the County Board of Education from Santa Maria, is at the New Morris House. She is a noted botanist and has the honor of having a number of rare plants named after herself as discoverer.”

September 25, 1896 [LAT/SB]: “Ida M. Blockman, assistant teacher in the Santa Maria High School, leaves tomorrow morning for home, her health not permitting her to remain here until the close of the institute.”