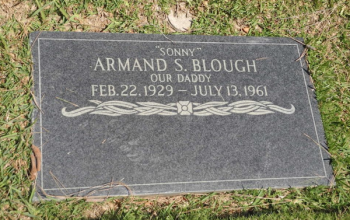 July 14, 1961 [LB Independent]: “Rescue bid fails; diver drowned. Avalon—An heroic attempt by a skindiver to save the life of his companion failed Thursday when a Torrance man drowned at Goat Harbor when his scuba outfit ran out of air. Constable John Windell said Armand S. Blough, 32, of 4728 Reynbolds Drive, drowned when his air supply gave out. A diving companion of Blough's Joe Hanna, 35, of 3327 W. 189th St., Torrance, said he saw Blough was in trouble and attempted to help him as the pair swam at a 60-foot depth. Both Blough and Hanna surfaced, but Blough apparently was exhausted, Hanna told Windell. Hanna carried Blough to shore and attempted to revive him by mouth to mouth resuscitation. Hanna hailed a passing boat who passed word to the Blue Fin of the California Fish and Game Department which sped 8 miles to Avalon Harbor to pick up a doctor and a resuscitator. Upon the Blue Fin's return the doctor pronounced Blough dead.”

July 20, 1961 [The Catalina Isld Shanander]: “Armand Shanks Blough, age 32, died Thursday while skin diving off Goat Harbor, Santa Catalina Island. Blough and companion, Joseph Leroy Hanna, had arrived at the island at 9:30 a.m. in their outboard and had been diving for approximately 30 minutes when Blough got into trouble. He signaled his companion that he was out of air when the two men were at a depth of 60 feet. Hanna went to his assistance; turned on the emergency supply of air and started to guide Blough to the surface. Blough and Hanna made their way slowly to the 30 foot level at which time Blough shot to the surface and started swimming to shore. He swam for approximately 50 feet and then turned onto his back. Realizing that his companion was in serious trouble, Hanna pulled him to shore and attempted to give him artificial respiration and mouth to mouth resuscitation. After 45 minutes he was able to attract the attention of a passing boat. Hal R. Minugh, a member of a mainland police department, swam ashore and attempted to revive the man while a companion radioed the Coast Guard for their assistance. The Coast Guard called Avalon Harbor Master Chick Upton, who notified Dr. Robert Staff, an ambulance crew, and Deputy Sheriff John Windle, and had them stand by at the Casino Pier. Chick then sent John Marin of the harbor department speeding towards the scene. Martin met the California Fish and Game patrol boat Blue Fin skippered by Capt. Don DeSpain. The two boats rushed to Goat Harbor where the Blue Fin's rescue gear and small boat were used to get ashore. Seeing that ample help was available, Marin returned to Avalon. Several minutes later the Blue Fin docked at the Casino Pier to board Dr. Staff and John Windle and then returned to the scene of the accident. On arriving at Goat Harbor, Dr. Staff pronounced Mr. Blough dead. At the time help arrived from Avalon, two corpsmen equipped with resuscitator equipment within yards of the scene. Within minutes two boats arrived from the Isthmus and a Coast Guard Cutter from the mainland arrived on the scene. The cooperation between various agencies was excellent but to no avail. Mr. Blough's death appears to be the result of a heart attack suffered while trying to reach shore. The Board of Supervisors of Los Angeles County have ordered an inquiry into the series of skin diving accidents that have claimed several lives during the last few weeks...”