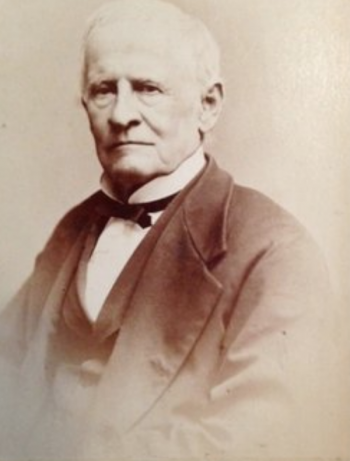 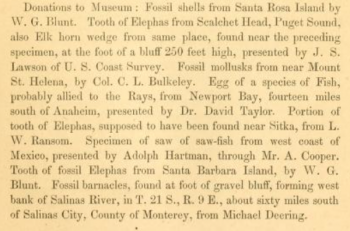 BLUNT, William George (1802-1878), Massachusetts-born hydrographer and publisher of nautical books and charts. He inherited his father's love of of the sea, leaving school at the age of fourteen to work on a ship. After five years he gave up life at sea to marry. He settled in New York, where his brother Edmund ran is nautical publishing house. George worked at updating nautical charts of the Bahama Banks and New York Harbor.

In 1833 Blunt was named first assistant of the United States Coast Survey and he held that position until his death in 1878. He became the leader of the publishing house and authored many of its books and charts. He wrote Memoir of the Dangers and Ice of the North Atlantic Ocean (1845), The Way to Avoid the Center of Our Violent Gales (1868), and Pilot Laws, Harbor and Quarantine Regulations of New York (1869). The Blunt brothers chart business, which published "charts of all the navigable world," was substantial. They also sold compasses, sextants, and nautical instruments of all descriptions. Blunt's books and charts provided the foundation for the United States Hydrographic Office; in 1867, upon his retirement, he sold the copyrights to his Coast Pilot and Practical Navigator, as well as many of the engraved plates for his charts, to the U.S. government, which continued to print them for many years. He was on the board of New York Pilot Commissioners for many years, forwarded complaints to Washington from captains, which led to reform in the lighthouse service, organized the pilot service in New York Harbor, was a harbor commissioner, and was a trustee of the Seaman's Retreat. He also served as commissioner of immigration, was on the committee which licensed sailors' boardinghouses, and helped found the U.S. Lighthouse Board and the Union League Club. worked on nautical charts of the Bahama Banks and New York Harbor.

Blunt died at age 76. He is buried in Green-Wood Cemetery, Brooklyn, N.Y.

“Mr. Stearns called attention to the fossil tooth of a species of elephant from Santa Rosa Island presented some time ago by Mr. W. G. Blunt, as it proved that the island was formerly a portion of the mainland. He had been informed by Mr. Blunt that the tooth had been found in situ, and near it was embedded the tusk of an elephant, the latter so far decomposed that it crumbled in the attempt to get it out.”

September 24, 1886 [SFDEB]: “Exploration of San Miguel Island. W. G. Blunt, the naturalist, with a commission in his pocket from the Smithsonian Institution is about to explore the Indian relics of San Miguel Island, off the coast of California, through the courtesy of W. H. Mills, the sheep-grower, who owns the island, and is very particular as to who lands there. Harper’s Weekly.”

1893: “C. D. Voy had made observations on Santa Rosa and San Miguel islands in company with Yates and Blunt some time earlier and submitted a manuscript to the California State Mining Bureau, but it was rejected though the existence of this manuscript is mentioned in the 11th Report of that year.” Orr, Phil Prehistory of Santa Rosa Island (1968) p. 5.

Blunt, Santa Rosa Island is a survey station erected in May of 1871 by Stehman Forney, “and stands on a smooth oval shaped hill on the south face of the island about 1/4 of a mile from the beach and 1-1/2 miles from the west point of the island. The southwest face of the hill on which the signal stands is covered with small limestones. To the northwest of the hill is a deep gulch running about east and west down to the ocean.” It was named by Forney to honor his colleague, G. W. Blunt. The station was remarked in 1934 by Charles K. Green with a standard disk stamped BLUNT 1872-1934. He stated: “the best way to reach the station is to make a boat landing at the small bight where an old abandoned shack is located about 3/4 mile from the west end of the island on the north side. Make for the top of the broad mesa that covers the west end of the island. The station location can be identified by a small knob on the edge of the mesa on the south side of the island.” This triangulation station appears on the Santa Rosa Island West topographic map. [UTM 10: North 3,763,591 East 757,472].