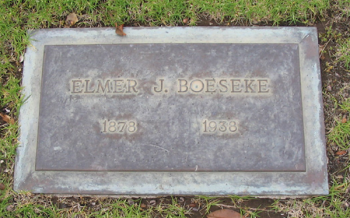 BOESEKE, Elmer Julius (1868-1938), native Santa Barbara-born physician who practiced medicine for 48 years. According to the City Directory of Santa Barbara, 1895-6, Dr. Boeseke lived and practiced at 110 W. Ortega Street. Boeseke was elected Santa Barbara mayor in 1907, serving for two years before being reelected in 1911, serving for an addition three years. He was an active member in the Santa Barbara Yacht Club, and owned the cabin cruiser, Elva.

Dr. Boeseke is buried in the Santa Barbara Cemetery.

July 16, 1895 [LAT/SB]: “An exodus of some of the prominent society people of this city took place this Monday morning for Cuava Val Dez, Santa Cruz Island. The party expects to be absent for three weeks. They have taken tents, servants and the good things of life, and intend to enjoy themselves hugely. The following persons compose the party: …and E. Boeseke.”

June 24, 1906 [SBMP]: “E. J. Boeseke, one of the most enthusiastic fishermen of this city, made a record-breaking catch of cabrillo in the channel on Friday. He went out in his launch with Frank Webster and Richard Nicholas, and caught 47 cabrillo, 3 barracuda and 2 bonita.”

December 27, 1912 [SBMP]: “Alfalfa bed not good for health. When Superintendent Frank Pepper of Santa Rosa Island was making a leisurely tour of his island estate Sunday, a field of alfalfa appeared particularly inviting and he sat down to rest. He finally went to sleep. When he arose two hours later, a twinge seized him in the back, and from that moment until Tuesday he grew steadily worse. He was then rushed across to the mainland in his launch Tortuga, Captain Nidever in command, and was taken to the Cottage hospital, where Dr. E. J. Boeseke is attending him. A bad attack of grip is one of the complications, the full extent of his trouble having not yet fully developed. Mr. Pepper has many friends in this city, and he is receiving many little attentions while in the hospital. It may be two or three weeks before he is able to leave his bed.”

August 8, 1918 [SCICo]: “This bearer, Ramon Romo, is an employee of this company. He has suffered a severe laceration of the right hand that we believe should have medical attention. Some two weeks ago he was thrown from a horse... Thanking you in advance for your attention and trusting that your bill will be forwarded promptly.”

January 11, 1919 [SCICo]: “Sickness at the Main Ranch has so interfered with the work that there will be no shipment of wine by this trip. At this writing, there are only five sick, the writer and his wife being among the number, with only one man in bed. Dr. Boeseke reports our trouble to be influenza. The captain brought only half the quantity of medicine ordered, with the result that we are running short and will be obliged to have the schooner back at once with a new supply.”

August 15, 1919 [SCICo]: “Romo was struck in the forearm by one of the colts that are being broken, and his arm is still sore and swollen after a week. We are sending him to Santa Barbara to Dr. Boeseke.”

February 23, 1920 [SCICo]: “Hilario Lugo, the cook at Christy, developed blood poisoning from a splinter under his fingernail last week. They did not report it to me until they had taken all the skin off his finger with horse lineament, laundry soap, etc., and the poison had started up his arm. He is getting better but won't be able to work for a few days, so I am sending him to Santa Barbara to let Dr. Boeseke look at it.”

February 24, 1920 [SCICo]: Clifford McElrath wrote: “I am sending to you for treatment Hilario Lugo who has an infected hand, and Mike Mullenary who has a sprained ankle.”

January 27, 1921 [SBMP]: “Five employees of the Santa Cruz Island Company with two others were brought to the city Tuesday night for medical treatment appear to be have sleeping sickness, Dr. C. B. Nagelman, who examined them, said last night. The men have been in a state of coma for five days, according to Dr. E. J. Boeseke, who also examined the men and confirmed Dr. Nagelman’s diagnosis. A sixth member of the party, Joe Bermudez, is being treated at his home, 719 East Haley Street. The other, Ike Newton of 614 Canal Street, is at Cottage Hospital. According to Dr. High Frisdell, Newton is suffering from food poisoning. Dr. Benjamin Bakewell who also examined Newton, said that the men may have been poisoned from food, but he would not care to say absolutely that was the trouble. The five who were taken to the County Hospital last night were Frank Ricci, Alexander Merlo, John Diana, Emanuel Lamont and Fred Giaconutti. The attending physicians said that they believe the men have sleeping sickness, brought on from existing for three months on meat. All are in a weakened condition. The men were employed on Santa Cruz Island in the construction of a wharf.”

September 26, 1922 [SBMP]: “Room for 250 to Santa Cruz. Palatial Yacht Zahama Offered By Owner For Big Sunday Cruise. Accommodations for the 250 civic leaders being invited to participate in the cruise next Sunday to Santa Cruz Island were assured yesterday when A. M. Andrews proffered the use of his yacht, Zahama, for the day. The Zahama is a 95-foot Lawley-built ketch, which two years ago was brought through the Panama Canal from the Atlantic to this coast and has been at Santa Barbara for the past two seasons. It shares with Maj. Max C. Fleischmann's schooner, Haida, the honor of being the most palatial pleasure craft in these waters. With the Zahama the fleet that will participate in the cruise Sunday numbers 10 boats. The others are Major Fleischmann's Haida, the Santa Barbara Yacht Club's schooner, Caprice, A. R. Pedder's yawl, Viva; Woods, Hansen and Cary's cabin cruiser, Arlight; W. C. Porter and Elmer Awl's racing sloop, Active; Elmer Boeseke's cabin cruiser, Elva;Captain Ira Eaton's staunch excursion boat, Sea Wolf, that has carried thousands of sightseers to the islands; Harry Doulton's cruiser, Miramar, and Mortimer Rodehaver's cruiser, Unome. All of the boats—Captain Eaton's Sea Wolf, as well as the private yachts—have been giving free of charge to the Yacht Club committee which is arranging the cruise, the only condition being that only guests wearing rubber-soled shoes be allowed on board. In this way have the owners of commercial as well as pleasure craft indicated their united support of the movement for a protected anchorage, which is to be launched on this cruise. The harbor improvement project is to be discussed in a few brief talks during the barbecue at Pelican Bay which is to be a feature of the outing. Most of the remainder of the day is to be devoted to cruising about the island. The fleet will leave Stearns Wharf at 6:30 Sunday morning, with Painted Cave as the first objective. It is the plan to be back in the harbor here by 5 o'clock in the afternoon. The outing has been announced as a strictly stag affair...”