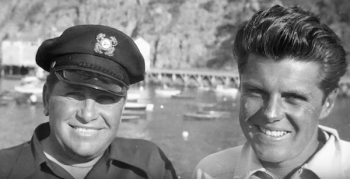 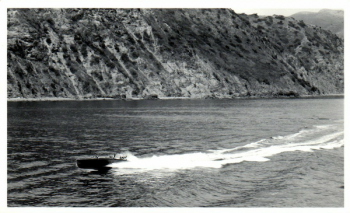 Doug Bombard, Al Bombard's son, moved to Two Harbors in 1958 where he flourished as an island businessman, opening the only restaurant at the Isthmus, the Harbor Reef.

Doug Bombard, his son Greg Bombard, and Greg's childhood friend, Tim Reutters, started Catalina Channel Express in 1981, a cross-channel express boat service providing reliable and faster year-round service to the Isthmus and to Avalon. Their first boat was Checkmate, later re-named the Channel Express. Tim Bombard served atvarious times as one of the captains. When Doug began spending more time on the mainland, siblings Randy, Tim and Wendy assumed more of the operational duties of the Isthmus operations.

On November 29, 1981, Doug Bombard arranged a search team to aid in finding the missing actress, Natalie Wood. Bombard found Wood's body in the water at Blue Cavern Point, one mile away from her boat, Splendor, with a small inflatable dinghy found beached nearby.

November 2, 1939 [TI/Avalon]: “Al Bombard and family returned from the north on Tuesday, just back from the International Exposition at Treasure Island and other points of interest. We nearly forgot to say that Al met the family at San Francisco on his way back from his fishing and hunting trip on the Klamath River. He reports excellent sport.“

February 17, 2006 [TI/Avalon]: “We would like to nominate Doug Bombard as Citizen of the Year. Doug has lived on the island all his life and will celebrate his 80th birthday next week. His mother would get him out of bed to run next door to light the church candles; so he was taught to serve at an early age. Doug and his father before him beloinged to the local Rotary Club serving wherever there was a need. Presently Doug is on the executive committee of the Catalina Island Museum. He was part of the original group that formed the Santa Catalina Island Conservancy to preserve and protect the island. He is still a member. He is on the Fairview Terrace Board of Directors and a volunteer at the Health Fair. Doug seems to know everyone and quietly helps when there is a need. A lady on the Island told me when she was seriously ill and had to go frequently over town to the doctor, free transportation was provided. Although retired he ramins active. He takes his grandsons fishing and helps his wife around the house. He’s a role model…the kind that makes Avalon unique. Doug has been nationally recognized as Entrepreneur of the Year. Isn’t it about time that we honored one of our own?”

March 3, 2006 [TI/Avalon]: “Catalina Express co-founder Doug Bombard celebrated his 80th birthday last week. Bombard is still active in Catalina Island activities. He and Hugh T. ‘Bud’ Smith are currently engaged in reviewing and commenting on the extensive aerial photo collection being donated to the Catalina Island Museum by Harry Merrick, lontime Isthmus Yacht Club member. Harry Merrick, a long-time member of the Isthmus Yacht Club, is now 90 years old and hopes to donate the negatives of these photo to the Catalina Island Museum. Aside from Bombard’s well known affiliation with Catalina Express, he also lived and worked at the Isthmus for 40 years between 1958 and 1998. Initially Bombard worked for the Santa Catalina Island Company. Eventually, he formed Doug Bombard Enterprises in 1976 to manage the Two Harbors area from Little Fishermans to Fourth of July of July coves. Bombard and Smith are also both accomplished pilots. Smith, a retired airline pilot, actually gave Bombard his first flight instruction at Catalina airport over 50 years ago. The Bombard family moved to Catalina in the early 1920s. Smith had the first civilian aircraft at the Catalina Airport and served on the Avalon City Council for 22 years including 16 years as mayor of Avalon. He was also a commercial pilot for United Airlines from 1948 to 1985.”

March 16, 2016 [Business Wire]: “ SAN PEDRO, Calif.- Avalon Freight Services, co-founded by Greg and Tim Bombard and Harley Franco, will debut freight service on Friday, April 1, 2016. Currently scheduled to operate a minimum of five days a week, year round, the company will transport freight from Berth 95 in San Pedro and the Pebbly Beach freight facility in Avalon. Franco states, “The collective experience of Harley Marine, a leading provider of maritime transportation services in the United States, including the largest tug boat operation in Los Angeles, and Greg Bombard, whose family has provided passenger transportation to the Mainland and other island services on the Island for nearly a century, has resulted in a company that will bring freight to island businesses and residents efficiently, safely and with a keen eye towards environmental protection.” In addition to scouring the country seeking the best Landing Craft and Tug and Barge systems, the new company will provide the safest, fastest, quietest, most efficient, eco-friendly and state-of-the-art freight transportation to Catalina Island from the Mainland in the island’s history. All of AFS’s Marine vessels significantly exceed all state and federal standards for air quality emissions and efficiencies. Highlights of its services include:

* New mainland facility at Berth 95 in San Pedro, with easy freeway access and close proximity to other passenger arrivals and departures via ferry or helicopter
* New, secure warehouse
* New custom designed vessels, including state-of-the-art hull design
* New style of self propelled Landing Craft, named the Catalina Provider, that allows for transportation of freight or evacuation of residents that meet EPA Tier 3 emission standards
* The Landing Craft will be able to land without adverse environmental impact on any beach on the Island, to deliver anything from camp supplies to fire engines
* New Ramp Barge capable of carrying 30 percent more freight than the previous freight provider and fitted with a 90,000 gallon tank to transport potable water
* The Ramp Barge will work with the reliable tug Lucy Franco whose engines have been retrofit to achieve Tier 3 emissions standards
* Faster one way channel crossing time of 3 hours
* Guarantee of current freight tariff for two years

Because the lease on the Santa Catalina Island Company’s Avalon freight site was expiring at the end of March 2016, the company issued a Request for Proposal from various freight providers. Ultimately, in December of 2014, Avalon Freight Services was selected as the new tenant and immediately began to research, secure and build the company’s facilities and vessels to meet the April 1, 2016 launch date. Since that time AFS has invested significant resources to provide its new offerings. There have been ongoing discussions between the existing freight service provider, Catalina Freight Line, and Avalon Freight Services to ensure a smooth transition with no disruption in service, including Avalon Freight Services taking on the liability of returning cars from the Island. Randy Herrel, CEO of the Santa Catalina Island Company, stated, “We are excited to commit to a ten year lease with AFS based on its fulfillment of all RFP requirements, including environmental leadership, safety, insurance, marine operations, financial wherewithal, integrity and the understanding and experience of working with the Public Utilities Commission. Maritime, transportation and logistics experience, and the safety record of Harley Franco and Greg Bombard, as well as the Bombard family’s love, appreciation and stewardship of the island, are the perfect combination to serve the island’s businesses and residents.” Los Angeles County Supervisor Don Knabe states, “The expansion of freight services and capabilities with Avalon Freight Services is a boon for island businesses, residents and the LA Port. Our work with Catalina Express was instrumental in the safe evacuation of island residents during the 2007 brush fire in Avalon and we look forward to continuing to work with Greg Bombard and the entire Avalon Freight Services team.” Avalon Freight services will operate at the San Pedro/Port of Los Angeles Warehouse from 7:30 a.m. to 4:00 p.m. Monday through Friday and 10:00 a.m. to 2:00 p.m. Saturdays. The Pebbly Beach Warehouse will operate from 8:00 a.m. to 4:00 p.m. Monday through Friday and 8:00 a.m. to 12:00 p.m. Saturday. For more information please call Avalon Freight Services at 310-221-6290, or contact@avalonfreightservices.com.

About Avalon Freight Services: Avalon Freight Services is a company that combines the maritime expertise and renown of Harley Franco of Harley Marine Services and Greg Bombard of Catalina Express, coupled with similar core values and principles of quality, integrity, respect for the environment and safety. Harley Marine is a full service maritime company operating with a strategic focus on safety and environmental sustainability. As the company continues to grow at a rapid pace, Harley Marine ensures they are always operating at the highest, most efficient, and safest possible level. Harley Marine has received dozens of awards for its philanthropic activities, environmental standards, safety record and corporate leadership. Three generations of the Bombard family, including Al, Doug, Greg and Tim, have been welcoming Catalina Island visitors on board their boats for nearly a century. Al Bombard, Doug’s father and Greg’s grandfather, established the Catalina Speedboat Company in 1922, using World War I aircraft engines in his speedboats. The boats, which he called Miss Catalinas, were attractions in their own right for visitors to the island. Doug Bombard grew up working on and piloting the Miss Catalina speedboats, plying the Avalon and Two Harbors areas, the harbor and surrounding coves. In 1981, founders Doug Bombard, with son Greg and colleague Tom Rutter, formed Catalina Express with one 60-passenger vessel carrying 3,256 passengers, seven employees, and three scheduled round-trips per day between San Pedro and the Catalina Island ports of Avalon and Two Harbors. Currently, its fleet of eight high-speed vessels carries more than 1 million passengers per year and each year anticipates 9,500 channel crossings. Since its first year in business, more than 25 million passengers have traveled aboard Catalina Express-operated boats. The company is the only service to operate daily service throughout the year.