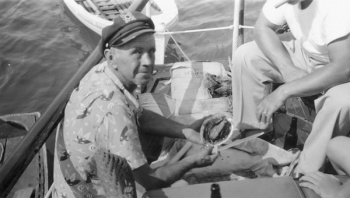 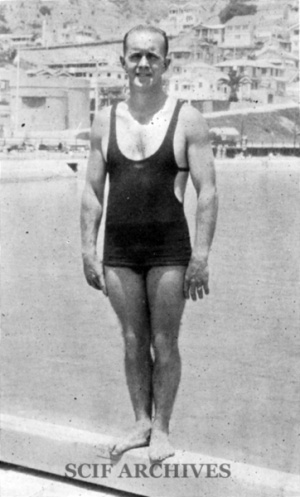 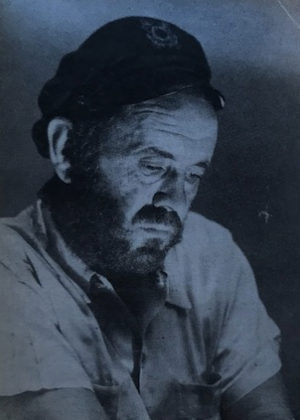 July 18, 1927 [LAT]: “Fictionists’ stories of battles with sharks in the deep were reenacted in real life yesterday when Harry Boosinger slew his quarry at Catalina Island. The shark was not a real man-eating kind, because there are none such hereabouts, but the thrill was no less genuine. A whale on exhibit was about to be towed from Avalon when Harry, a professional diver on the glass-bottom boat Empress, dived under to see what was making the dead mammal ripple the water. An eight-foot thresher shark glared back at him as it fed on the blubber beneath the whale. Harry drew his trusty knife and swam to the attack… [the whale] happened to be a Bryde whale]…”

February 21, 1930 [LAT/SCat]: “Avalon. The exhibition of deep sea diving by Harry Boosinger, professional, drew the closest attention of both Mr. and Mrs. Coolidge, and a remark by Wrigley that the expert holds a record of three minutes twenty-one seconds playing around underwater drew a word of praise from both…”

August 6, 1930 [TI/Avalon]: “Harry Boosinger will take on all comers at the water fencing, and several preliminary bout have been arranged.”

February 5, 1931 [LAT/SCat]: “Avalon. In ‘recognition of the saving of life on the high seas,’ the Mrs. William Wrigley, Jr. awards of a handsome gold watch to each were presented to Captain William Cummings, First Officer Frank Penoyer and Second Officer Gustav Metji of the S.S. Avalon and to Harry Boosinger of the glass-bottom boat Emperor… Harry Boosinger, the fourth man to receive recognition for valor from Mrs. Wrigley, was cited for his courage in leaping overboard into a seething sea during a storm when a companion was swept overboard from the glass-bottom boat Emperor.”

January 25, 1933 [TI/Avalon]: “… On we go, passing White’s Landing. At this time we pass the M. S. Torqua, with Captain Harry Boosinger heading for Avalon Bay…”

May 5, 1935 [LAT]: “Yellowtail and bonito are running at Santa Catalina Island… Mildred Pomeroy, a 14-year-old Hollywood High School girl, holds the season’s woman’s record today with a double yellowtail catch made the past week, fishing with Captain Harry Boosinger from his boat, the Torqua…”

November 5, 1935 [LAT]: “…The Hermes sister ship, the Perseus, meanwhile was rescuing two Avalon sportsfishermen, H. J. Kemp and Harry Boosinger, who narrowly escaped disaster off San Clemente Island when their power cruiser Torqua sprung bad leaks under pounding from heavy seas. They were aided at first by the whaling ship California, which radioed for Coast Guard assistance. When the Perseus arrived and attempted to pump out the swamped Torqua the little craft sank. Kemp and Boosinger were taken to Avalon.”

November 14, 1935 [TI/Avalon]: “A small boat, but it did play an important part in the making of Santa Catalina Island history. I refer to the good boat Torqua. For over forty years this small boat had graced the beautiful shores of this Island. The Torqua was built for the Banning Company. After many years of service, they sold it to the late “Torqua Pete”, who used it as a combination pleasure and fishing boat. This last owner, Harry “Monk” Boosinger, used it for every purpose. The good old Torqua went aground on the shore of San Clemente Islans, and finally went to where all good ships go — to ”Davy Jones' locker”. Captain Boosinger lost all his worldly belongings. After saving himself, he sat down and waited to be rescued by some passing ship. He finally thumbed a Coast Guard cutter, which brought him safely to Avalon. This Harry person has had more experiences than anyone I know. To the old timers the Torqua is just another good boat that has ceased to exist.”

June 13, 1936 [LAT/SD]: “The Coast Guard cutter Perseus left port here today to give aid to a disabled forty-two foot motor cruiser twelve miles south of Ensenada. Dean Banks, South Pasadena, owner of the boat, chartered the craft to Howard Street, Los Angeles, for a fishing trip in Mexican waters. Captain Harry Boosinger of Avalon is also aboard with two other men whose identity was not reported. The boat is reported adrift without fuel for the motors.”

June 25, 1936 [TI/Avalon]: “What started out as a pleasure cruise of Mexican waters ended on the end of a Coast Guard towline here today as the 42-foot Los Angeles cruiser, Dafoe, with seven aboard, was brought back into port after drifting ten days off the Lower California coast. The Dafoe was picked up Saturday by the U.S.S. Perseus, Coast Guard, dispatched from here in response to a wireless essage from the British steamer Gothic Star. Shortage of fuel was reported as the trouble by the captain, Harry Boosinger of Avalon.” The vessel left San Pero June 1, and picked up three of her party at Ensenada, Mexico the following day. They started for Guadalupe Island, 180 miles off the coast, but were unable to make it, and then ran out of fuel.”

April 29, 1937 [TI/Avalon]: “The fishing season is here, and barracuda, with yellowtail and some white sea bass, have been seen in good numbers. At the present writing, one barracuda, the first one, was caught by Harry Boosinger…”

April 21, 1938 [TI/Avalon]: “Harry Boosinger is the champion water fencer of Catalina Island, having been defeated only once, by Bob Strom, on one 4th of July. He regained his championship by defeating Bob on Labor Day of the same year. The sport was originated in the year 1927, and the last match was in the year 1936.”

June 2, 1948 [LAT]: “The sea yesterday claimed the life of Harry (Harry the Monk) Boosinger, 48, the agile Santa Catalina Islander who for 32 years defied death in the ocean as a diver and a film stunt man. Only a diving mask and air hose surfaced before the horrified gaze of his wife, Minta Boosinger, off Lion’s Point, near the Isthmus, when his mooring craft crew hauled up the diving line in response to what they believed a signaling tug on the line. Then followed a frantic three-hour battle to reclaim Boosinger’s body from the ocean which he had defied so often that he was reputed to have a ‘charmed life.’ The body finally was recovered by Harold Warner, Jr., whom Boosinger had taught to dive. Boosinger, whose exploits had included a victorious underwater battle with a shark off Catalina, left Two Harbors yesterday afternoon in his craft, The Scout, which he used in his yacht mooring service at the Isthmus. Aboard were Mrs. Boosinger, Carl Hermack, Boosinger’s assistant; Mona Vincent, Leona Machado and Tom Machado and Tony Pacido, members of a South Seas orchestra playing at Two Harbors. Near some kelp beds off Lion’s Point, Boosinger offered to show his guests how to dive. He went down in about 40 feet of water, wearing the service diving mask, with air lines and a 30-pound weighted belt. The party aboard watched Boosinger standing on the ocean bottom and after half an hour passed, Mrs. Boosinger became alarmed, saying that her husband had been warned by his physician, because of a heart condition, not to remain underwater ‘too long.’ The crew at the same time felt what they believed a tug on the line, the signal to hoist the diver. They then noticed that the air hose apparently had become fouled, but continued hauling in a desperate attempt to bring Boosinger up. When only the air mask surfaced, the party sped back to Two Harbors. There film actors John Wayne and Grant Withers, vacationing at the Isthmus, Wilfred Olsen, Jr., Navy veteran and son of the manager of Two Harbors, and Tony Ainahaw, another South Seas musician, put out in the fast craft Apache for the scene of Boosinger’s dive. Attempts to dive wearing face masks but no weights, were futile because of the water’s buoyancy. An alarm to Avalon brought Warner, Oscar Griffith, a pioneer glass-bottom boat diver, and constable Tinch Moricich, whose brother Harry once had been rescued by Boosinger. Besides his widow, Boosinger leaves a brother, Leonard, of San Diego, and a sister, Mrs. Esther Roscoe of Los Angeles.”