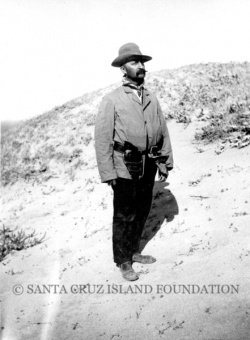 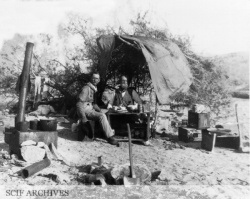 BOWERS, James DeMoss (1864-1917), was one of three children born to well-known self-taught archaeological collector, Stephen DeMoss Bowers and his first wife, Martha. DeMoss, as he was called, followed in his father’s footsteps, excavating Indian remains in various southern California locations.

Bowers died of liver failure at the age of 54 from excessive drinking.

DeMoss Bowers and John Von Blon conducted an expedition to San Nicolas Island in 1907. Von Blon made a photo album of that expedition, the original of which is in the collections of the Santa Cruz Island Foundation:

January 28, 1884 [SBDP]: “DeMoss Bowers, of Ventura, is spending a few days in this city after an absence of four years, and his many friends are glad to welcome him back. About the middle of the week he will return to Ventura, where he is engaged in assisting his father, Dr. Stephen Bowers, in publishing the Ventura Free Press.”

June 13, 1897 [LAT]: “DeMoss Bowers of this city has returned from a two months’ sojourn on San Clemente Island with a rare collection of Indian relics to supplement an already choice collection in his possession. Much interest has been excited among archaeologists over these San Clemente specimens, as many of them are unique and of particular interest. Some of the curious consist of ornaments, trinkets and utensils of stone, bone and shell, stone pipes, whistles, figures of seals, birds, fish, butterflies, etc. ‘San Clemente Island,’ said Bowers yesterday, ‘is one of the most desolate and forbidden places that can be made on the bleak western side, and there isn’t a harbor on the whole island that is a safe anchorage at all times. There are one or two places very difficult to reach, where a certain amount of water may be procured. We were compelled to go twenty miles for the water we used. A company has a man to look after some stock on the island, but he is unable to succor distressed parties.”

September 23, 1897 [LAT/SB]: “An expedition organized by DeMoss Bowers went to San Miguel Island yesterday in the interests of science and history. The party will extend its researches about six weeks.”

October 22, 1897 [LAT/SB]: The DeMoss Bowers expedition has returned from San Miguel Island, laden with valuable and interesting curios and a large measure of success.”

September 25, 1898 [LAST/SCat]: “San Diego party returned from San Nicolas Island… Landing in the surf was difficult and dangerous, and the party did not land at Corral Harbor, owing to the heavy sea… C. F. Holder, who has located fifty town sites on Santa Catalina, and who was with the party, stated that there was a continuous stretch of shell deposit left by Indians all along the shore. There are two caves, one discovered by DeMoss Bowers, which contains inscriptions of fish and other animals, and another nearer the coast…”

November 24, 1907 [LAT]: “Rare relics for museum. Dr. F. M. Palmer, curator of the Southwest Museum, is negotiating with the owner and excavator, DeMoss Bowers… the purchase at a nominal price, of his many implements, adornments, skulls and other specimens gathered on San Nicolas, San Miguel and San Clemente islands off the southern California coast. The collection is unique in that it was made entirely by one man…”

September 12, 1915 [LAT]: “Relics of pygmies found on Pacific. Dug up near Los Angeles by amateurs in archaeology. Revealing either a race of hitherto unknown pygmies, or the ostracizing of the unfit by the aborigines of the Pacific Coast, 30 strange, malformed skulls and other interesting remains were dug up recently within 50 miles of Los Angeles by DeMoss Bowers and Charles T. Brown, amateurs of archaeology. They now repose in the collection of the latter in Cucamonga… In the grave of the 30 Liliputians were found ollas or cooking bowls of steatite, serpentine bowls and knives of chert, affixed to redwood handles by asphaltum. Now steatite is found only on Santa Catalina Island, while no deposits of serpentine are known outside of San Luis Obispo County…”

January 30, 1916 [LAT]: “An expedition to San Miguel Island, which has jus been concluded under the auspices of the Southwest Museum, confirms the belief already held that the highest types of culture among the early peoples of the California coast existed on the Santa Catalina group of islands. The explorations were extensive and exhaustive and it is believed that there remains little or nothing further to be discovered on the islands. DeMoss Bowers, son and assistant of the late Stephen Bowers, pioneer archaeologist of Southern California, and Charles T. Brown of Cucamonga, conducted the researches on Santa Cruz and San Miguel of the channel Group for the museum. Since Santa Catalina, San Clemente and San Nicolas have been thoroughly explored for many years, it was desired by the museum that Santa Cruz and San Miguel islands should be further searched for new evidences of primitive culture. A confirmation of the advanced form of stone-age civilization found on San Nicolas last year was especially hoped for… The work of William Herman Golisch’s Expedition of 1914 to San Nicolas Island, is the only one that in recent years, has developed anything of extraordinary importance…”

June 24, 1916 [SBDN]: “One of the baffling mysteries of the Pacific — the history of a vanished race — may be solved this summer. An expedition is being fitted out here for that purpose. The mystery zone is on the Channel Islands, off the coast of Southern California, and along the coastline where there are many evidences of an earlier people. DeMoss Bowers, famous archaeologist, and Milton Carlson, expert on hieroglyphics, are now making arrangements for the exploration trip. Bowers has spent 40 years in collecting data on this vanished race. He has discovered many hieroglyphics in obscure caves along the Pacific coastline. He hopes, by finding a key to these symbols, to uncover much interesting knowledge of the race and perhaps its entire history. Carlson has become interested in this angle of the expedition and will make a strenuous attempt to decipher the hieroglyphics. After exploring the coastline, Bowers and Carlson, with their party, will go from Santa Barbara to the Channel Islands on the yacht, Sea Wolf, owned by Captain Ira Eaton. A careful study will be made of the traces of the race in an attempt to discover its origin and end. ‘The people who lived on the Channel Islands were undoubtedly Indians,’ says Bowers, ‘but they differed from other Indians on this continent. I have spent 40 years investigating these strange folk, but as yet their origin is a mystery and what became of them is equally baffling. I have made a dozen trips to the Channel Islands, staying several months at a time. I began these explorations as a boy, acting as my father’s assistant. We investigated these once inhabited places for the Smithsonian Institute, discovering many relics and exhuming 7000 skeletons. We also discovered traces of 200 villages. Some of these we found on the mainland. On the island of San Nicolas I found remains of fossil elephants, indicating that at one time these islands were a portion of the continent.’ Bowers has concluded from his study that the inhabitants lived entirely on the products of the sea; that they knew nothing of agriculture, wore no clothing and were a small, squat people, not unlike the Eskimos. Records of the Santa Barbara Mission, established in 1805, indicate that the islands at that time were thickly populated. The evil influence that these wild, seafaring people exerted over the mainland Indians, whom the padres were trying to civilize, is mentioned by the mission historian. However, another entry made 17 years later, tells that the inhabitants of the Channel Islands had become almost entirely extinct. What became of them is the mystery that Bowers and Carlson hope to solve. ‘It is the greatest mystery of the Pacific,’ says Bowers. ‘The ambition of my life has been to work out this puzzle. Several theories have been advanced as to what caused the extermination of the race. Plague, smallpox, warfare with Russian otter hunters or trouble among themselves have been mentioned as causes. Whatever it was, we hope to have some interesting discoveries if not the complete solution of the mystery when we return from our expedition.’”

July 5, 1916 [FTWS]: “Vanishing race of Channel Islands. New baffling mystery of Pacific… DeMoss Bowers, famous archaeologist, and Milton Carlson, expert on hieroglyphics, are now making arrangements for the exploration trip. Bowers has spent forty years in collecting data on this vanished race. He has discovered many hieroglyphs in obscure caves…He hopes, by finding a key to these symbols, to uncover much interesting knowledge of the race… After exploring the coastline, Bowers and Carlson, with their party, will go from Santa Barbara to the Channel Islands on the yacht Sea Wolf, owned by Captain Ira Eaton…’I have made a dozen trips to the Channel Islands, staying several months at a time.’…”

March 19, 1917 [LAT]: “Santa Monica. Death claims DeMoss Bowers. DeMoss Bowers, noted geologist, writer and lecturer, who has unearthed more Indian burying grounds on the Pacific Coast than any other one man, passed away after a lingering illness… He was 54 years old and is mourned by a widow, a son and a daughter. Mr. Bowers came west years ago with his father, Dr. Stephen Bowers, who was the first man to be sent out by the United States government to make maps and charts of the coral reefs upon the Pacific Coast… He has lived in Santa Monica ten years. While here Mr. Bowers became deeply interested in the burying grounds of a large tribe of Indians… He leaves a widow, and DeMoss Bowers, Jr., a son, and Miss Ruth Bowers, a daughter…”