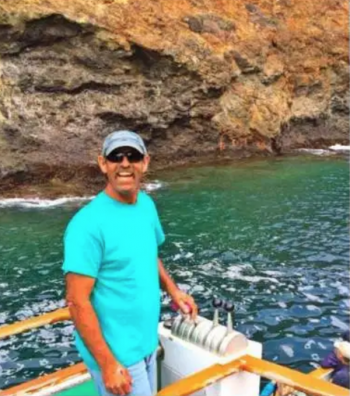 Jerry Boylan, captain of the Conception 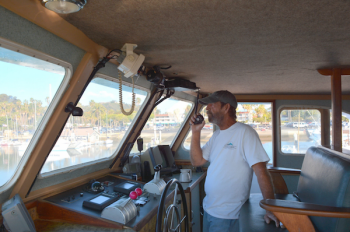 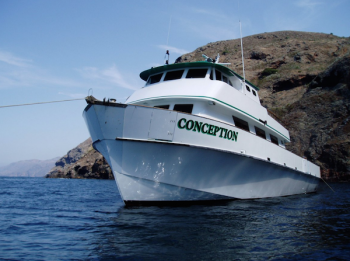 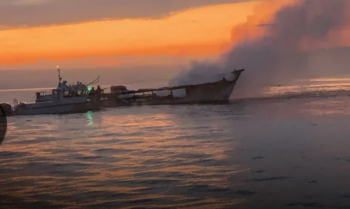 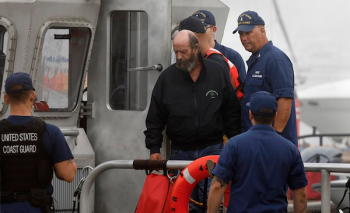 Captain Jerry arriving back at the mainland,
September 2, 2019

BOYLAN, Jerry (b. c. 1954), captain of the Santa Barbara based 75-foot dive boat “Conception” that caught fire in the middle of the night on September 2, 2019, just 20 yards from shore with 34 people trapped below deck with no way to escape. Boylan commanded the “Conception” for many years and is a well-respected and well-admired captain.

The fatal trip was a $665 Labor Day weekend dive trip to the Channel Islands sponsored by Worldwide Diving Adventures. The captain of the ship jumped off and was rescued, it can be heard on US Coast Guard radio communication with the captain. Thirty-four perished, including one crew member.

Boylan said he had been at sea his whole life. His father was a U.S. Coast Guard officer. Jerry began diving at age 5 and has been piloting dive boats for Truth Aquatics since 1985.

“The 65-year-old captain of the Conception held a valid merchant mariner credential as a master of self-propelled vessels (not including auxiliary sail) of less than 100 gross register tons upon near coastal waters. He had worked for Truth Aquatics since 1984 (with a 3-year hiatus in the late 1990s), starting as a deckhand and then rising to captain in 1985 once he had obtained his 100-ton master’s credential. According to Truth Aquatics and Coast Guard documents, he had captained all three of the company’s vessels, but was primarily assigned to the Conception throughout his 3 decades of employment with the company. Although the company did not complete any type of employee evaluations, the owner told investigators he had never had any concerns with the captain’s performance. The captain was in overall charge of the vessel. Crewmembers, both current and former, told investigators that the captain was the primary operator of the helm and engine controls, turning over to the second captain or first deckhand for designated periods when transiting at night, or for short periods during the day for breaks.”

September 20, 2019 [islandpacket.com]: “California’s dive boat, Ghost Ship fires share legal lessons. One was a ship in name only, an artist commune set up in an Oakland warehouse. The other was a bona fide boat afloat on the ocean off Santa Barbara. Both became fiery death traps for a combined 70 souls, two of the worst disasters in modern California history. Each has brought a search for blame aimed at finding whether someone was negligent. Getting criminal charges to stick in the 2016 fire at the Ghost Ship warehouse has proven difficult and could provide lessons as investigators decide whether a crime occurred aboard the Conception scuba diving boat that burned this month. "When you have this type of significant tragedy, it screams out for an investigation of possible involuntary manslaughter or negligent homicide," Loyola Law School professor Laurie Levenson said. But after a jury acquitted one of the Ghost Ship defendants this month and deadlocked on charges against the other, it should give prosecutors pause as they determine whether to charge the Conception's crew, the boat owners or authorities who inspected the vessel, said Levenson, a former federal prosecutor. The investigation into the Sept. 2 fire aboard the dive boat has yet to shed light on what ignited the fire that killed 34 people trapped below deck in the middle of the night. The National Transportation Safety Board's preliminary report last week said all six crew members were sleeping when the fire broke out. That would violate Coast Guard regulations requiring a roving night watch and could trigger charges under what's known as the federal seaman's manslaughter statute, which carries penalties of up to 10 years in prison per count if a captain or crew member is convicted of negligence or misconduct. Unintentional deaths in building infernos, crane collapses and nightclub stampedes have often led to manslaughter charges. In California and many other state courts, the charge would likely be involuntary manslaughter. That requires showing someone acted with gross negligence, meaning they didn't use caution and took risks a reasonable person would not have taken under the same circumstances. The little-used boating manslaughter law only requires showing the simple negligence that's required in injury lawsuits, meaning someone should have recognized the risk and acted differently. "It is unusual to have any criminal statute where the intent to be proven is simply that of negligence," said attorney Michael Lipman, who represents Jerry Boylan, the captain of the Conception. He said his client was "emotionally devastated" but declined to discuss the investigation. Federal prosecutors would have a lower standard of proof than the district attorney who tried to convict the leader and a tenant of the Ghost Ship artist enclave of involuntary manslaughter in the deaths of 36 people during a Dec. 2, 2016, electronic music show. Derick Almena rented the industrial building and is accused of illegally converting it into an unlicensed entertainment venue and artist live-work space. Max Harris collected rent and scheduled concerts. The pair made the building into a labyrinth loaded with flammable furniture and a rickety stairway that gave little chance for escape, prosecutors said. On the day federal investigators interviewed Conception crew members, jurors acquitted Harris and deadlocked on charges against Almena. Defense lawyers suggested the Oakland fire, the cause of which was never determined, could have been arson. They argued the city, the fire department and the building's owner shared blame for the disaster. There were no records that the warehouse had been inspected every year as required and that likely would have identified it as illegal housing posing a serious fire risk. Robert Weisberg, a Stanford Law School professor, said it was difficult to know who was in charge at the warehouse and the defense "somewhat plausibly" blamed others. "There is this ugly irony ... that the Ghost Ship was called a ship, but what it was basically was a chaotic patch quilt of businesses, human relations, tenancies, friendships," Weisberg said. "So identifying and imputing responsibility is just incredibly difficult." Pointing a finger in the Conception case will be easier because of Coast Guard regulations and the ship's clear organizational hierarchy, he said. The NTSB's investigation is aimed at finding why the boat fire happened and how to prevent another one, board member Jennifer Homendy said. After visiting a dive boat just like the Conception, she cited how difficult it was to reach an escape hatch in the bunkroom — a design that has routinely met regulations. While defense attorneys might try to blame insufficient regulations or a shoddy inspection, it wouldn't necessarily absolve the captain or crew, said Carolyn Ramsey, a law professor at the University of Colorado. "It's not a defense if the government inspectors fail to properly find problems with the boat," Ramsey said. "The captain is responsible for keeping the boat in a safe condition and providing . ways of escape and rescue in the case of a fire." The captain also could be criminally liable for crew actions that caused deaths, Ramsey said. Executives of the boat company could be charged if prosecutors can show fraud was involved. In their favor, Coast Guard inspection records show the boat passed its two most recent inspections with no safety violations. Previous customers said Truth Aquatics Inc., which owns the vessel, and the captains of its three boats were safety conscious. But that doesn't necessarily mean the boat was properly maintained and had the needed safety equipment or that passengers got proper safety briefings before setting off Aug. 31 for a three-day excursion. A lawsuit filed recently by a crew member, Ryan Sims, who broke his leg when he jumped from the upper deck to escape the flames, said the boat was unsafe and improperly maintained. "The boat is unseaworthy by nature because it caught fire and sank," Sim's attorney, Kurt Arnold, said Thursday. "Part two is you're always supposed to have someone on watch. ... So once a fire starts for whatever reason that someone can either take action or get everyone off. That didn't happen in this case."”