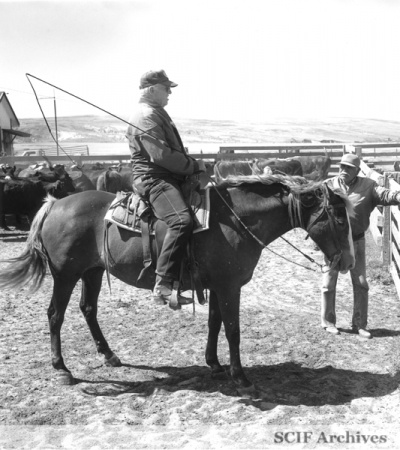 BRACAMONTES, Jesus (b. 1926), all-around cowboy and ranch-hand for Vail & Vickers. Jesus and his wife, Virginia, were originally from Sonora, Mexico, but when they were married in 1947, they moved to Tecate. Jesus went to work on Santa Rosa Island in 1952 when he was 26 years old, and stayed for about eight months. He left and then returned ten years later 1962. While on Santa Rosa Island, Jesus drove a truck called “el Comando.” He enjoyed fishing along the shore. Jesus would ride on horseback over the mountains to locations like China Camp, spending two or three nights there to check on the cattle.

Jesus and his wife had six children, all of whom grew up on the mainland, spending summers on the island. Eventually Virginia moved to the island after the children were grown, and she and Jesus lived in the old school house. When Jesus retired, they moved to the mainland. Virginia died not long after, and Jesus was rehired by Vail & Vickers to move back to Santa Rosa Island. When all of the cowboys left with the last of the island cattle in 1998, Jesus retired to Tecate, Mexico.