Sandy Bredin with Brent Stewart on San Nicolas Island, qualifying for the All 8 Club, 2016 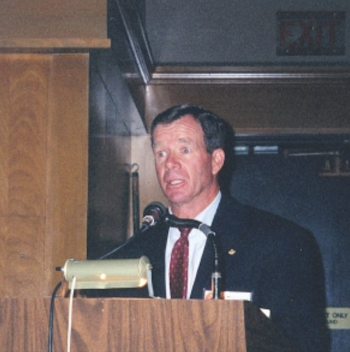 BREDIN, Robert "Sandy" (b. 1941), professional pilot who had a contract with Channel Islands National Park for about four years, from 1981-1985, to fly supplies to various islands within the park. He flew both a Cessna 180 and a Cessna 182, known as Skywagons. He was retired as captain from United Airlines when he reached maximum retirement age.

Sandy Bredin is number #185 of the All 8+ Club, an achievement he completed in 2016 with his visit to San Nicolas Island. In addition to the eight California Channel Islands, he has visited the following islands in bold on the Club's expanded list of Alta and Baja California islands:

May 5, 1984 [NTSB]: “Cessna 180K [N66597]: The pilot was taking off in a 35 knot wind with the flaps extended. The aircraft became airborne in a 3 point attitude, and when 2 to 3 feet in the air, it began a left turn. Subsequently, the wing dragged the ground and the aircraft nosed over. The pilot said he should have raised the aircraft's tail earlier and not used flaps. The wind was gusting to 40 knots.” [Sandy Bredin; Reed McClusky; Ranger Tom].