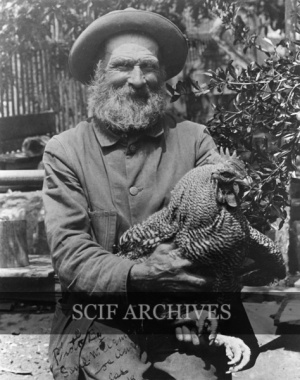 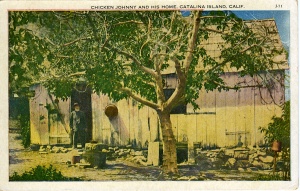 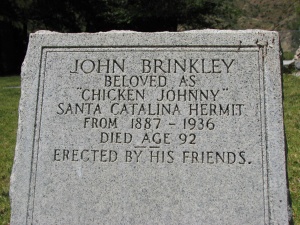 BRINKLEY, John aka “Chicken Johnnie” (1847-1936) arrived at Avalon, Santa Catalina Island in 1887. An Englishman who from hailed from Kent, Brinkley lived primarily as a hermit just outside Avalon. He grew fruits and vegtables, and lived with his chickens, selling eggs to the local population. When electric service was established, he passed on the opportunity, preferring his coal oil lamp. People said he was “never known to complain.” In 1933, three years before his death, the local Avalon paper noted:

“Chicken John still brags about his big figs and just uses them for table use.”

CHICKEN JOHNNY'S: “A group of farm buildings on the right of the road a short distance beyond Rock Falls Canyon. A good hunting ground for adventive plants, many of which, like Nepeta cataria and Ruta graveolens Johnny claims were introduced several years ago through his importation of “mill screenings” for chicken feed. He wisely asserts that: "It is good for chickens to scratch aroun' for their food, 'stead of gettin' it too easy"; he, therefore, made a practice of scattering the screenings widely about his place, where a large number of fowls had open range.” [Millspaugh & Nuttall Flora of Santa Catalina Island (1923)].

CANYON OPPOSITE CHICKEN JOHNNY'S: “The fourth canyon opening into Avalon Valley on the left. It is so densely filled with trees, shrubs and vines that very few of the flowering herbs of the canyon floors are to be found here. The upper part is extremely steep and less densely wooded. Here the usual flowering herbs find welcome conditions of light and soil. It faces northeast and is generally dry.” [Millspaugh & Nuttall Flora of Santa Catalina Island (1923)].

USC Digital Library: Photographic portrait of John "Chicken George" Brinkley, native of Catalina Island, behind a house, ca.1885. Mr. Brinkley stands with his hands to his sides an his hat on, in front of some dying bushes. A tall, adobe house stands in the background behind him, partially obscured by trees. A tall hill is visible still further in the background, behind it. Mr. Brinkley had only been off of the island once in his lifetime, and worked for Shatto.

September 23, 1916 [SBDN]: “Picture a little jolly, weazeny fellow with twinkley eye and crook in back; with legs much bowed from trespass of 70 years; with a veritable forest of whiskers and much matted, unkempt hair. That’s Chicken Johnnie, hermit of Catalina Island. For 30 years John Brinkley of England, has been ‘Chicken Johnnie of Magic Isle.’ He’s never been across tot he mainland, nor had a haircut or shave. He lives alone. No dog, cat, no companion — just Plymouth Rock chickens. That’s where he gets his name. John’s abode is situated in a glen one mile back in the hills. It is made from rough boards, crudely battened, and whitewash is almost wholly scaled off. Silence encompasses it. Once a day, however, John goes to Avalon — for mail and state bread. Bread is chicken feed. He sees nobody — except grocer, postmaster and cronies he’s known for years.”

October 30, 1917 [TI/Avalon]: “If you are interested in the sight of something unusual in the vegetable line, and withal of wonderful growth, take a stroll up the canyon west of town to ‘Chicken’ John’s ranch and ask to see his chayote vine. It covers a wire frame about twelve by forty feet in size, from which dozens of perfect fruit are hanging, the size of a mammoth Bartlett pear. The chayote is a West India cucurbitaceous vine, producing a pear-shaped growth, which is cooked and eaten as a vegetable pear. It has only lately been introduced into Southern California, as a desirable food plant. Another thing not often seen on the tree are bananas slowly ripening in the balmy air of Catalina. Go and see them.”

April 16, 1918 [TI/Avalon]: “Did you ever eat a banana that fully ripened on the tree? The writer and a friend were up at Chicken John’s on Sunday, and he treated us to some ripe ones off his trees. They were so deliciously sweet, and so tender that they fairly melted in the mouth.”

June 11, 1924 [TI/Avalon]: “At Chicken John’s there are chickens, pigs, roosters, turkeys, dogs, and lots of other animals. John works so hard up at this house. He has lots of trees up there.”

October 15, 1930 [[TI/Avalon]: “Large hailstones on Catalina Island on Thursday. Chicken John, who has been an island resident for 45 years, stated that he had never before seen hailstones so large at Catalina.”

August 19, 1931 [TI/Avalon]: “John Brinkley, the man who was “never known to complain,” came to the island in 1886. He was born in Kent, England. His first home in Avalon was located near the old barns where now stands Villa Park. His first occupation was that of a crawfish fisherman. Then he abandoned that type of work and started to raise figs, squabs and poultry. Hence his name, ‘Chicken John,’ the hermit of Catalina Island. With the Wrigley reorganization, John’s home was moved a mile up Avalon Canyon, where he has since resided. On several occasions friends offered to build him new quarters and refurnish them, but he steadfastly stuck to his old ideas and the coal oil lamp. In 1919 he became ill and was moved to the Los Angeles County Hospital on a small cot, which gave him an opportunity to ride on is first street car. At the time of this writing John Brinkley is 88 years of age.”

January 18, 1933 [TI/Avalon]: “John Brinkley, who came to Catalina in 1887, is seriously ill at the home of Mr. and Mrs. Victor Malcuit on Claressa Avenue. For many years he kept the small chicken ranch adjacent to the Avalon Poultry Farm in Avalon Valley — hence his title Chicken John. he was born in Kent, England, and is believed to be more than 90 years of age. When he first came to Avalon in 1887, he located his small shack where Villa Park now is located. His first occupation on the island was that of road building, for the Banning Company; but he soon abandoned that kind of work and commenced to growing figs, squabs and poultry. As the Hermit of Catalina, he was never known to complain about anything. If the weather was stormy, John, from his optimistic views called attention to the fact that Catalina storms seldom last more than three days. On several occasions friends offered to build him new quarters, and finish them; but it was only during this past year that he permitted the installation of electricity to his cabin. Despite the many improvements that have been made in and around Avalon, he stuck steadfastly to his old ideas,his blue overalls, a gunnysack for a sleeping bag, a wheelbarrow for transportation, and the old coal oil lamps for illumination. During the past three years he had made several trips to the mainland as the guest of Mr. and Mrs. Malcuit. Previous to that time he had made only one visit to the mainland in years.”

June 4, 1936 [TI/Avalon]: “’Chicken Johnny’, famous hermit of Santa Catalina Island, known to thousands of vacationists as the island philosopher, was laid to rest on the island he loved so well, Wednesday morning (June 3rd). John Brinkley was the name under which ‘Chicken Johnny’ was born, in Kent, England, 96 years ago. But on Santa Catalina Island, where he lived for half a century before illness took him to the mainland hospital, he was known only as ‘Chicken Johnny.’ John Brinkley came to Santa Catalina in 1885, when Avalon was known as Timm’s Landing. He raised chickens in Avalon Valley, where he lived in a small shack which he refused to forsake for a new modern home which the late William Wrigley offered to build for him. For 26 years he wheeled a sack of grain in his wheelbarrow each day from the pier to his shack in the canyon, for chicken feed, never missing a day, rain or shine. His first trip off the island was after 31years, when he became ill and was confined for three months to the General Hospital, later returning again to the island, his fig orchard and his chickens. ‘Chicken Johnny’ was a confirmed bachelor, with a unique philosophy about women. He claimed he could pick a good wife from the looks of the heels of her shoes; but he never chose one for himself. ‘Chicken Johnny’ was a member of the High Church Episcopalian of England. He could discuss Darwin, Huxley, Spencer, and the ancient philosophers. Friends and businessmen of Avalon raised a purse with which to bring ‘Chicken Johnny’ back to the island and lay him to rest among his old acquaintances, in the old cemetery that is now closed to new interments.”