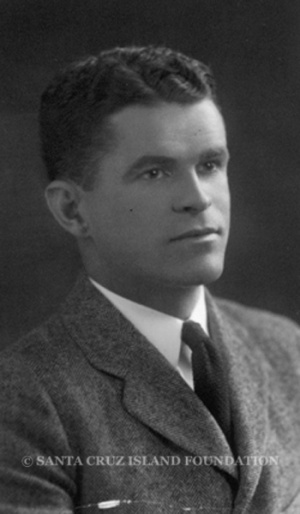 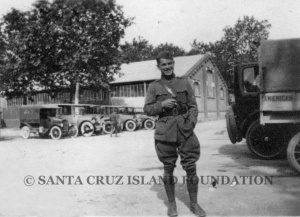 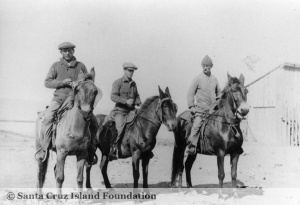 Moore (l) and Brooks (center) served in the Army during WWI, and Russell (r) and his wife, Ada, took care of San Miguel Island. 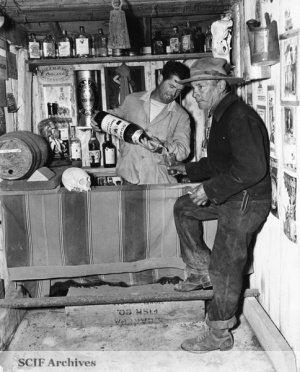 Robert L. Brooks behind the bar serving Arno Ducazan. The collection of bottles shown here were mostly picked up on the beach where they washed ashore.
San Miguel Island. World Wide Photo, 9/7/1937 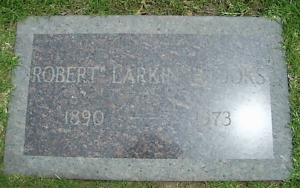 BROOKS, Robert Larkin (1890-1973) [SS#554-52-6652], born in Cambridge, Massachusetts, Brooks was a 1912 Yale graduate who served in France World War I before moving to California’s Imperial Valley in 1913, and then to Carpinteria in 1915 where he began various investments in rural real estate. In 1917, he and partner James R. Moore invested $30,000 in the San Miguel Island ranch and its 1700 sheep with lessee William Waters. Four months later, Waters died of a stroke. Brooks and Moore held the lease in partnership until 1925 when Books took over as sole lessee, a position he maintained until 1948.

Brooks thrived on hard outdoor work, and with the help of a variety of managers including long-timer Herbert Lester, Brooks ranched on San Miguel Island for over three decades. In 1948 the Navy revoked its lease and told Brooks to take his sheep and other property off San Miguel Island. They gave him a 72 hours notice after his 32 years of occupancy, stating they needed the island “for military purposes of a confidential nature,” and thus ranching on San Miguel Island ceased forever, only to become a bombing range. In addition to ranching sheep on San Miguel Island, Brooks ran sheep on San Nicolas Island under an arrangement with his friend and fellow Santa Rosa Island neighbor, Mr. Vail.

Robert Larkin Brooks died at age 83 and is buried in the Santa Barbara Cemetery.

April 1, 1920 [SBMP]: “According to papers filed with the County Recorder yesterday, San Miguel Island has been leased for another term of five years at the rate of $200 a year. The new lease is effective this morning, the lessees being Robert L. Brooks and James R. Moore of Los Angeles, who have been in charge of the island since the lease of Captain W. G. Waters expired. The land is used mostly for grazing purposes and has the reputation of being very windy. Water is reported scarce. The land represented is seven and a half miles long and two miles wide.”

April 1, 1920 [ODC]: “San Miguel Island has been leased for another term of five years at the rate of $200 a year. The lessees are Robert L. Brooks and James R. Moore of Los Angeles, who have been in charge of the island since the lease of Captain W. G. Waters expired. The island is used mostly for grazing purposes and has the reputation of being very windy. Water is reported scarce. The land represented is seven and one half miles long and two miles wide.”

February 23, 1931 [REG]: “Los Angeles. Robert L. Brooks, who owns San Nicolas Island off Ventura, California, is being sued in superior court here for $10,000 damages because of the death of Steve Semerenko, fisherman. Mrs. Efrosinia Semerenko charges her son was killed by a rifle bullet fired from the defendant’s island last February 25. Milton W. Prentice, eighteen-year –old ranch hand, pleaded guilty last May to killing Semerenko and was sentenced to serve from five years to life in prison. Witnesses at Prentice’s preliminary hearing testified there was a bitter feud between the island ranchers and fishermen because of the theft of sheep and cattle.”

May 20, 1936: “Dear Sir, With reference to your recent inquiries regarding San Miguel Island you are advised that Mr. R. L. Brooks is now occupying this island for sheep grazing purposes under authority of a revocable permit issued by the Secretary of the Navy on April 1, 1935 and extended July 1, 1935 for an indeterminate period on a month to month basis, and at a rental of $50.00 per month payable in advance. This permit, among other things, requires the Permittee to restrict the quantity of livestock on the island as may be reasonable and necessary in connection with such erosion control plans which may be formulated by the Government. The exact number of sheep on the island ar present is not known at this time, but is believed to be in the neighborhood of 800 head. Pending the formulation of further plans for the future use and management of this island by the Navy, no change is contemplated in the present permit. The inadvertent delay in replying to your inquiry is regretted and it is hoped that the foregoing will give you the information you desire. Very truly yours, Geo. A. McKay, Captain (CEC) USN., Public Works Officer.” [Letter: G. A. McKay to H. G. Staab, National Archives and Records Administration Pacific Region (Laguna Nigel)]

January 9, 1959 H.R. 2126 in the House of Representatives, 86th Congress 1sr Session, A Bill for the Relief of Robert L. Brooks: Be it enacted by the Senate and House of Representatives of the United States of America in Congress assembled, That the Secretary of the Treasury is authorized and directed to pay, out of any money in the Treasury not otherwise appropriated, to Robert L. Brooks of Carpinteria, California, the sum of $20,000. The payment of such sum shall be in full settlement of all the claims of the said Robert L. Brooks against the United States for damages for destruction of sheep and other personal property belonging to him on San Miguel Island during the period from December 1, 1948, to July 1, 1950, inclusive, for the recovery of which there exists no judicial or administrative remedy…”

March 26, 1959 Congressman Charles M. Teague to Robert L. Brooks: “Unfortunately the Subcommittee on Claims gave an adverse report on H.R. 2126, the private bill I introduced for you; and the Committee on the Judiciary has tabled the bill… I did all that could be done to enlist Committee support, so naturally, I, too, am disappointed at the outcome.”

November 8, 1973 [LAT]: “R. Brooks, 83; Island Rancher. Private funeral services are scheduled in Santa Barbara Friday for Robert L. Brooks, 83, a rancher who leased San Miguel Island from the federal government from 1915 to 1948 to graze sheep. Mr. Brooks, who ran as many as 2,000 sheep on the uninhabited, 9-mile long island, died Tuesday in a Santa Barbara convalescent hospital after a lengthy illness. Mr. Brooks spent his last years with his wife Hope on a lemon and avocado ranch in Carpinteria. In addition to his wife he leaves a son, four daughters and 13 grandchildren. Welch-Ryce Associates, funeral directors, are in charge of arrangements.”