Jonathan Brown (b. 1950), twin of Anthony “Tony” Brown, farmer brothers from Carpinteria, CA. Jonathan Brown, a friend of Carey Stanton and Henry Duffield,Jr., served on the Santa Cruz Island Foundation board for a number of years (2005-2012).

Jonny made his first trip to Santa Cruz Island in April 1968 with his brothers, Tony and Steven, aboard Zel Talbert's plane. Of the trip Jonny noted:

Easter: “Climbing out of the Ojai airstrip in the 195 Cessna, we flew over the top of Chismahoo mountain, and then headed out to sea – our first trip to Santa Cruz Island! Zel’s father had gotten permission for us to land on the east end from Mr. Gherini, and we were all excited. Steve remembers that Zel had him fly most of the way, as a trial by fire. Arriving at the east end, Zel took over the controls again and after a few passes we spotted the strip marked out on top of a bluff and dove down to land. We didn’t expect the dips and turn, but we came to a safe stop, perched on the side of a hill. We jumped out and started exploring – very beautiful. Knee high green oats and blue sky – paradise!

We followed the road down and around an old olive orchard on the hillside to the beach and Smugglers Cove. We stripped down and dove into the cold water for a swim, and soon returned to the beach to lay in the sand and warm up again. We explored up and down the beach, hardly believing where we were, as the whole setting felt like cast-away Island.

Then we went back down to the beach to the large grove of eucalyptus trees and walked up the dry creek bed. I was following along a stone walk and stopped to look at the old ranch house there. It suddenly occurred to me that the shade of the tree I was under was a cherimoya and I couldn’t have been more surprised. We explored around the abandoned ranch house, which showed all the signs of how difficult this ranch life must have been. 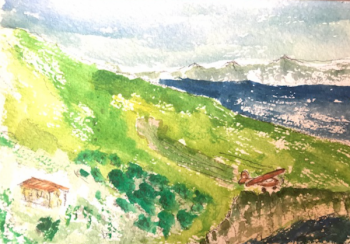 Later in the afternoon we returned to the east end of the beach and worked our way up some steep water canyons, following after some sheep to the top of bluff. We walked the length of the runway and climbed back in the 195. As always, Zel prop-started the big old plane, and it rumbled to life, squatting like a huge grasshopper on the hillside. As Zel climbed in to the pilot’s seat we talked about the cleverness of the downhill runway. This take-off was going to be easy, as the plane started it’s rollout with the slightest throttle. Things were just great for a few seconds, but suddenly changed when we realized that we weren’t picking up MORE speed. “Something’s wrong,” Zel shouted as we approached the end of the strip. The engine was roaring as Zel did a quick revision of his controls. “Oh! I forgot the prop pitch !” he yelled as he pulled it full open. With all the dramatic sounds the old plane could produce, we pitched over the cliff and clawed into flying trim, not even 20’ above the water. After that precarious take off, we flew around the eastern end of Santa Cruz before heading home. I don’t recall if we said so at the time, but at least the authorities didn’t have to fish us out of the drink with gaff hooks.”