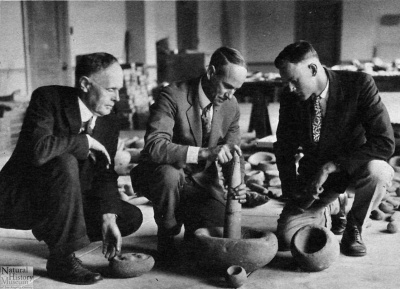 BRYAN, Bruce (1906-2004), born in Washington, D.C., he was the first staff archaeologist at the Natural History Museum of Los Angeles County. When the museum opened in 1913, there was no formal anthropology department. Bryan was hired in 1926, the same year the museum sponsored an expedition to San Nicolas Island. Bryan spent two months, from October 15 until December 14, 1926, on San Nicolas Island collecting Indian artifacts with C. W. Hatton and Arthur R. Sanger as field assistants. He then joined the Southwest Museum where he worked as curator of archaeology for over 50 years.

After the depression he left the museum and returned to Washington, D. C. to work for the government, returning to the museum in 1959. In 1970, Bryan published a book based on his 1926 island fieldwork through the Southwest Museum of the American Indian. He retired from the museum in 1983, and lived to be 98.

Bryan died on September 16, 2004, and was survived by his wife, Katherine. His Notes on the Archaeological Exploration of San Nicolas Island are in the National Archaeological Archives, Smithsonian Institution [NAA MS 3403].

October 3, 2004 [LADN]: “Born on January 16, 1906 in Washington, D.C., he passed away peacefully at his home in North Hollywood on September 16, 2004. He is survived by his wife, Katherine. Bruce worked for the Southwest Museum for over fifty years, as Curator of Archaeology; editor of their monthly publication, The Master Key, and Director Emeritus. In 1926 Bruce began his professional career as field archaeologist for the then County Museum of Natural History. Bruce led a field expedition to San Nicolas, one of the remote Channel Islands off the coast of Santa Barbara, where they unearthed much important material. He then joined the Southwest Museum and participated in a series of important excavations, which took place throughout the southwest. Sadly the depression caused the museum to terminate the excavations and Bruce was recalled. He then left the Museum and returned to Washington, D. C. to work for the government. In 1959 Bruce returned to the museum and resumed his work until his retirement in 1983. His retirement years were happily spent in traveling, writing and research. He is deeply missed by his wife, friends and associates.”