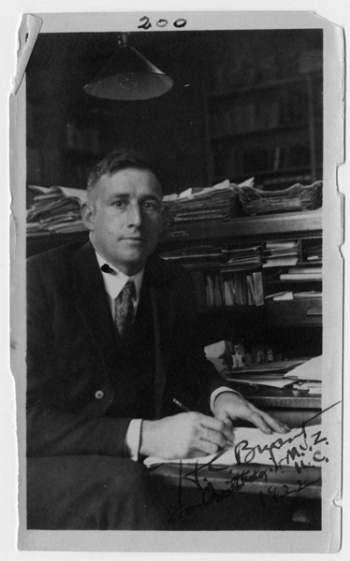 BRYANT, Harold Child (1886-1968) [SS#556-66-8300], naturalist born in Pasadena, California on January 30, 1886, he received his PhD in zoology and paleontology from the University of California, Berkeley. Bryant was associated with the Museum of Vertebrate Zoology [MVZ] from 1910-1927, first as a Field Assistant and then as Assistant Curator of Birds and Economic Ornithologist. While at MVZ he also worked for the California Department of Fish and Game, where he later directed research and was editor of the new California Fish and Game journal.

Bryant had many significant accomplishments, but was most proud of his role in establishing the interpretive programs for the National Park Service. Bryant was named as the first director of the Yosemite School of Field Natural History. He also assisted in organizing several national parks, including Olympia National Park and Grand Canyon National Park where he eventually served as Superintendent, where he discovered new species of birds, butterflies and plants.

Bryant died in Berkeley on July 14, 1968. His papers are on file at the California Academy of Sciences. [PHOTO CAS]