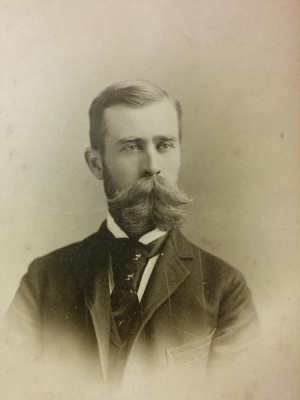 BRYANT, Walter Pierce [E.] (1861-1905), California-born naturalist and ornithologist who, in addition to birds, also collected mammals, plants and insects. Bryant was appointed curator at the California Academy of Sciences in 1886, a position he held until 1894. In 1889 he was a founder and first president of the California Ornithological Club.

Bryant made two trips to Mexico’s Guadalupe Island in 1884 and again for four months in 1887-1888. He visited Santa Rosa Island on April 3, 1903. A prolific writer, Bryant published about 40 titles, including reviews.

Bryant died May 21, 1905, shortly after returning from San Blas, Mexico, where he had become ill. He was 44 years old. He is buried in Santa Rosa Rural Cemetery, Sonoma County, CA.

BRYANT, Walter Pierce. “Born in Sonoma, California, January 14, 1861; died in San Francisco, California May 21, 1905. The most active, careful and conscientious field worker of his day in California and Curator of Birds at the California Academy of Sciences for a number of years. Best known from his investigations of the birds of Guadalpe Island and the peninsula of Lower California. He described the Guadalupe Petrel (Oceanodroma macrodactyla) and his work is now commemorated in Bryant's Cactus Wren (Helodytes b. bryanti), from San Telmo, Lower California, and Bryant's Marsh Sparrow (Passerculus s. bryanti), from Oakland, California.”

In Memorium “ Not since the lamented Chester Barlow passed away, nearly three years ago, has this Society suffered so severe a loss as from the recent death of our esteemed honorary member, Walter E. Bryant. And in this case, too, the final dissolution was wholly unexpected, because none of his friends were aware of his illness until a few days before the sad event. In June I904 Mr Bryant was sent to San Bias, Mexico, to investigate the tangled affairs of a large fruit concern. With his usual conscientious care he did his work with great completeness and unearthed a system of graft which had all but rendered the company bankrupt. He had never been of robust health. and from overwork and worry in an abominable climate, with worse food, he became seriously ill. He remained at his post, however, until his successor arrived, and then left only after repeated urgings from a friend who happened to be stopping temporarily at San Blas. Mr. Bryant did not fully realize his precarious condition. After his arrival in San Francisco he was sent to a sanatorium, but failed to rally, and passed away on May 21st, at the age of forty-four years. Although he was still a young man, Bryant may be considered a pioneer in his chosen field because his work was mostly done in, until then, practically unexplored regions or regions which had been only touched. His name, therefore, occupies an important place in West Coast ornithology by reason of his important explorations and his substantial and accurate contributions to the literature of the subject. He collected also mammals, plants, and insects, and published several important papers on mammalogical subjects. Although his first article on natural history appeared as early as 1878 in Science News, I, No. 7, it was not till after his appointment as curator in the California Academy of Sciences, in 1886, that he began to write extensively. As Mr. Grinnell has summarized on another page,"the majority of his published writings appeared from 1887 to 1889 in the ‘Bulletin' and ‘Proceedings' of the California Academy of Sciences, and from 1890 to 1893 in ‘Zoe'; a periodical published for four years at San Francisco." During this time which spans his period of activity in ornithological lines, Mr. Bryant published about forty titles, including reviews. A complete list of his ornithological papers has been compiled by Mr. Grinnell and is appended at the end of this sketch. Probably the West has never produced a better field ornithologist than Mr. Bryant. He was a most intelligent and painstaking observer, and as a preparator of specimens he certainly stood without a peer. In the Academy of Sciences are many examples of his work, accomplished under great difficulties, and without exception the skins are good. When he had leisure and proper facilities his specimens were works of art. He was also expert in mounting birds, and mounted hummingbirds in the field. In addition to being a skilled preparator, Mr. Bryant was an intrepid explorer. His visit to Guadalupe Island. as an instance, was accomplished in the face of serious physical difficulties, and he nearly starved to death, being obliged to stay about three times as long as he had originally intended. Walter E. Bryant Leas born January 14, 1861, at Sonoma, Sonoma Co., California, and was the son of Daniel Sharp, and Susan H. Bryant, who survive him. ” Written by Walter K. Fisher published in The Condor: September 1905