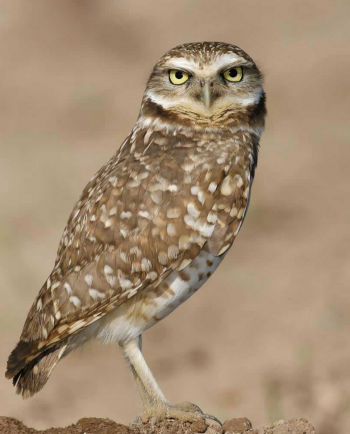 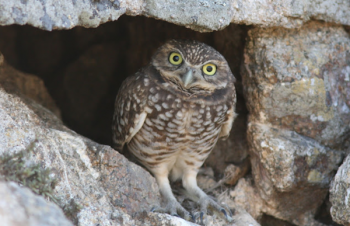 BURROWING OWL (Athene cunicularia) [Speotyto] is a small, long-legged owl found throughout open landscapes of North and South America. Burrowing owls can be found in grasslands, rangelands, agricultural areas, deserts, or any other open dry area with low vegetation. They are known to breed on Santa Cruz Island.

On Southeast Farallon, the ashy storm-petrel, a pigeon-sized light-grey bird with a white stripe across its wings, is listed as endangered by the International Union for the Conservation of Nature. Petrel numbers are under threat from burrowing owls, which have come to the island in increasing numbers to feed on the mice. When mice are scarce (which may happen in off-breeding seasons), the burrowing owls end up eating the ashy storm-petrel chicks.

1907 San Clemente Island: “Speotyto cunicularia hypogaea. Burrowing Owl. The small rocky ravines extending halfway up the hillsides from the shore of the northeast coast, seemed to be the favorite hiding places of the Burrowing Owls during the day. The specimens secured differ very slightly, or not at all, from those of the mainland coast district. Resident. ” [“Visits were made to Clemente in January, February, March, April and October, 1907.”]
Linton, C. B. Notes from San Clemente Island The Condor 10:82-86, March 1908

1907 Santa Cruz Island: “Speotyto cunicularia hypogaea. Burrowing Owl. Fairly common in suitable localities. Specimens secured average slightly paler than those taken in the vicinity of Los Angeles. Measurements also differ slightly. ” [“At 11:30 p.m., November 19, 1907, my father (H. Linton), Mr. George Willett, and myself left San Pedro harbor in a dilapidated fishing smack and in company with a crawfisherman, one “Cold-foot” Jorgensen. We arrived off the south end of Santa Cruz Island at 10:30 the following day during a stiff norwester. For various reasons we were unable to make camp until the 22nd. It may not be amiss to state here that twice during the blow we were nearly wrecked: once while at anchor in Potatoe Harbor, a broken anchor allowing the boat to drift within the breaker line and nearly onto the rocks. In this instance the timely arrival of Willett and H. Linton in a small boat, saved the day, and incidentally the fishing smack. At another time (the engine having broken down) we were blown nearly onto the rocks of Anacapa Island; but with father at the wheel and Willett and I on the “sheet” we managed to hold her off. I mention the foregoing, and the many sleepless nights spent on the rocky shores, “running” the surf several times each day (with attendant duckings), etc., merely as a warning to those who seem inclined to believe a field naturalist’s life “strewn with roses”. (Its ’ generally strewn with cacti!)”]
Linton, C. B. Notes from Santa Cruz Island] The Condor 10(3):124-129, May 1908

1927 Santa Barbara Island: “Speotyto cunicularia. Burrowing Owl. Carriger and DeGroot saw two birds on the southern part of the upland slope.” [“Through the generosity of Mr. Silsby M. Spalding who placed at our disposal his splendid cruiser Padariva I the writer accompanied by H. W. Carriger, Dudley DeGroot and 0. W. Howard was enabled to spend the period from March 25 to April 5, 1927, inclusive, among the Channel Islands off the coast of southern California.”]
Pemberton, J. R. Additions to the known avifauna of the Santa Barbara Islands The Condor 30(2):144-148, March-April 1928

1927 Santa Rosa Island: “Speotyto cunicularia hypugaea. Burrowing Owl. None of these birds was seen by us  [Dudley DeGroot, J. R. Pemberton, H. W. Carriger & O. W. Howard], but the species is included here because of an accurate description of it which was given by the ranch boys. The birds have been recorded from all the other islands and should be present here. The opportunity did not present itself for any of us to accompany the boys to the place where these owls lived.”
Pemberton, J. R. Additions to the known avifauna of the Santa Barbara Islands The Condor 30(2):144-148, March-April 1928