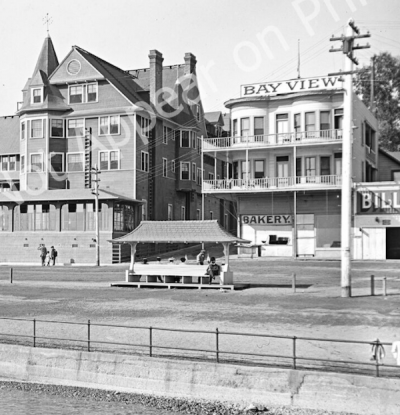 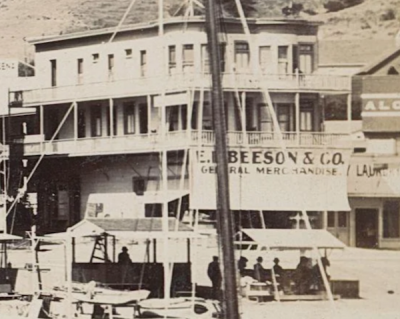 Bay View Hotel, Avalon, Santa Catalina Island (c. 1898-1915), was built before the turn of the century by Eugene Beeson (1860-1928) and his younger brother, Willard. It was located on Crescent Ave. at the corner of Whittley Ave., across the street from the Grand View Hotel and to the west of the Hotel Metropole. The hotel burned in the 1915 Avalon fire.

July 11, 1902 [LAH]: “ Mrs. D. J. Firstenberger of Seneka, Kan., fell into an unprotected drain last evening and broke both bones in her left ankle. THe lady was returning to the Bay View Hotel, where she is stopping with other members of her family, and was attracted by the music and dancing in the ballroom of the Metropole and stepping from the roadway to a narrow terrace by the windows to better observe the festivities. Between the terrace and the windows is a cement lined drain about three feet deep and four feet wide extending along the side of the hotel to carry off water falling from its roof... ”

November 29, 1915 [LAH]: “Avalon. Flames raze half of island resort... Life was imperiled in hundreds of instances, and in the Bay View Hotel, where Mrs. Lillian Hanson of 331 S. Lake Street, Pasadena, was staying with her 80-year-old mother, it was believed at first that the mother had perished in the flame. It was discovered, however, almost immediately that the daughter had rescued her mother, almost carrying her from the burning building. The two women, with other fire refugees, turned from the flames to the ranks of the fire fighters and carried buckets of water until they were taken aboard the steamer Hermosa and brought across the channel...”