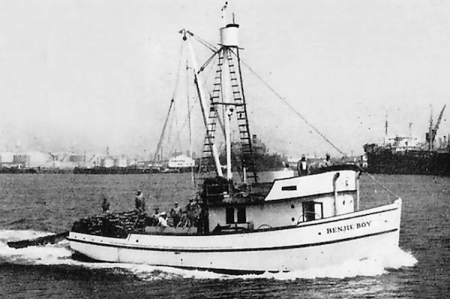 April 14, 1955 [LBI]: “$200,000 vessel sinks off Catalina. Fire roars through the purse seiner Benjie Boy Wednesday afternoon off Catalina Island after an explosion. A few minutes after this picture was taken from a Coast Guard plane, the $200,000 vessel sank. All crewmen were saved. Explosion and fire ripped through the purse seiner Benjie Boy Wednesday afternoon off the Isthmus of Catalina Island and within a few minutes the $200,000 San Pedro fishing boat sank, forcing its crew of nine into life rafts. Frank Breskovich, 59, of 949 W. 12th St., San Pedro, owner of the boat and eight other survivors were picked up by another San Pedro purse seiner, the Two Sisters, after it received a Coast Guard report of the sinking. One casualty was Joe Galosic, of 647 W. 20th St., who suffered a minor cut on his left leg, according to Coast Guard headquarters. Others in the crew, all of San Pedro, were Benjamin Breskovich, 19, son of the owner, who was making his first trip aboard the vessel; Phillip Matulich, of 1231 20th St.; Sam Zarick, 1241 W. 20th St.; Sam Zarick, 1241 W. 20th St.; Miro Farara, 541 W. 20th St.; Anton Tomich, 772 W. 18th St.; John Lucich, 375 W. 19th St.; and Sam Movar, 549 W. 12th St. Breskovich told Coast Guard officials that the fire started in the engine room, apparently from ignited fuel fumes, causing the explosion. A few minutes after the crew abandoned the burning boat they were spotted by a Douglas Aircraft plane out El Segundo, which radioed the Coast Guard for assistance. Three Coast Guard planes were dispatched to the area, but the survivors were picked up by the Two Sisters and later transferred to a Coast Guard cutter for transportation to the mainland. The Benjie Boy was named after Breskovich's son. It was built two years ago.”