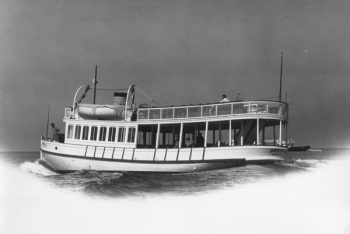 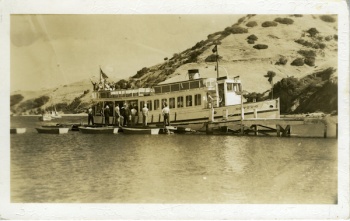 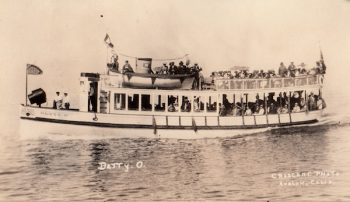 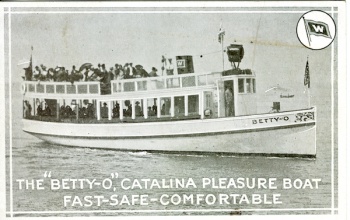 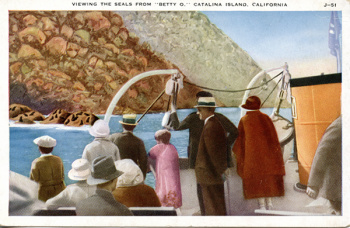 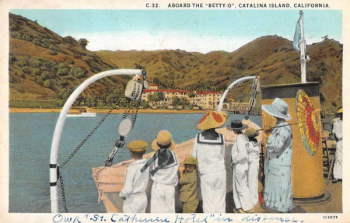 Aboard the Betty O at Santa Catalina Island

Betty O (#221463) (1921-1942+), 58-foot gasoline steamer built by William Muller for William Wrigley Jr. and the Wilmington Transportation Company. It is named after Wrigley’s granddaughter, Betty Offield. The vessel had a three-cylinder engine with only 16 horsepower located in the bow. It made excursions around the island and to the Isthmus until 1937. Joe Guion of Avalon, who worked on the flying fish tours, said

“the Betty O’s skipper was Al MacDonald, who was quite a boatman. The boat had an almost direct reverse and could turn fast when docking.”

June 15, 1921 [LAT]: “The Santa Catalina Island Company will launch a new vessel on Saturday for service between points on the island. This ship, spokesmen for Mr. Wrigley say, will fly the American flag. She is named the Betty O, and will be launched at 6 P.M. at Wilmington. The Betty O is a sixty-five-foot boat, equipped with latest type engines and having a capacity of 200 passengers. She is to be used in handling the excursion business out of Avalon to points around the island, particularly the trip to the isthmus, which is run daily during the summer months. Miss Augusta Muller, daughter of the shipbuilder, is to christen her.”

June 8, 1924 [LAT]: “The fast pleasure boat Betty O operates for sightseeing trips at Catalina Island, going to the Catalina Isthmus and returning from Avalon; also to Seal Rocks and other points of interest. In the evenings during the summer, the Betty O makes nightly trips to see the flying fish by the thousands, forming one of the most widely known attractions at Catalina…”

September 20, 1932 [LAT]: “Captain Clause Walton, port captain for the Wilmington Transportation Company’s pleasure fleet at Avalon, yesterday brought the glass-bottom boat Empress from Catalina Island to undergo annual overhaul at the yards of the Wilmington Boat Works. The craft will return tomorrow. She will be followed for overhaul by the glass-bottom Princess and Phoenix and by the searchlight boats Betty O and Blanche W.”

January 15, 1942 [TI/AVALON]: “The Betty O arrived in Avalon to take up a regular run between Avalon and the Isthmus. The trim craft had been thoroughly overhauled, and boasted improvements to the lighting system.”

2008: “On May 24th the Blanche W launched for another season of service. On July 1st she celebrated her 84th birthday. Ada Blanche “Blanny” Wrigley Schreiner, William Wrigley Jr.’s granddaughter, who the Blanche W is named after, christened the boat on May 30th at the first annual Catalina Island Flying Fish Festival.” [Water Lines, 2nd Q., 2008].