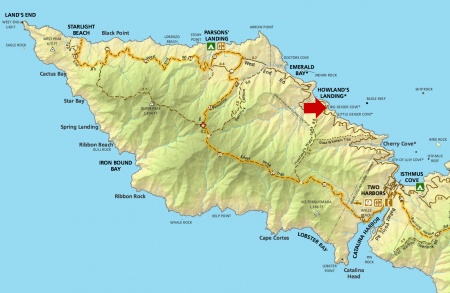 Big Geiger Cove, Santa Catalina Island is located west of Little Geiger Cove. It has 10 anchorages and facilities for the Blue Water Cruising Club. Although there are no morrings, it is one of the best natural anchorages on the island. Big and Little Geiger coves are named for George Ledu Geiger (1912-1992)[SS#566-32-4802). Geiger attended Boy Scout Camp at Emerald Bay in the late 1920s. He built an 18-foot yawl he named the Daisy R. George. He and his wife, Thelma Julia Klots (1913-2006), had six children. The family spent summer time aboard the boat at Catalina Island.

The Blue Water Cruising Club is a non-profit corporation founded in 1945 and has leased the shore facilities at Big Geiger Cove since 1953. The Blue Water Cruising Club maintains no mainland facilities and its focus is the use and maintenance of the Cove facilities for members and their families. The Club is small, limited to no more than 55 boats and their owners, to ensure that all members have the opportunity to use the Cove and the facilities, even during the busiest summer weekends. The Club was founded as a sailing club and wishes all members develop boating skills relating to sailing. The membership process is not open to the owners of powerboats. The Club has no employees, maintains no mainland facilities, and accomplishes everything it does through the physical efforts of the members. At the Cove there are no moorings and all boats anchor using bow and stern anchors. There is no dock at the Cove and all landings are by dinghy, kayak. or swimming to the beach. The club is not full and is accepting applications for membership.

History: Charles "Bud" Martin (11/11/1905 - 9/28/1997), member #1, and the founder of the Blue Water Cruising Club, said: "Immediately after World War II, cruising among the islands (and particularly around Catalina) was open to all of us so, there was never need to have your own cove - you were free to go where you wished. Time, and the great migration westward, eliminated the freedom we once experienced, so the necessity for leasing the cove, which we affectionately call 'Big Geiger,' became paramount to all of us. The yearly leasing of the cove from the Catalina Island Company started in 1953.