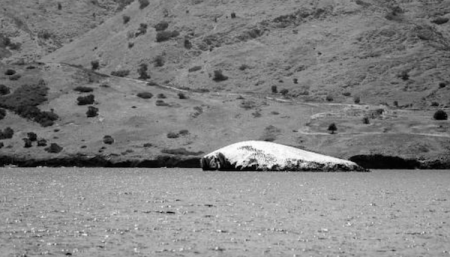 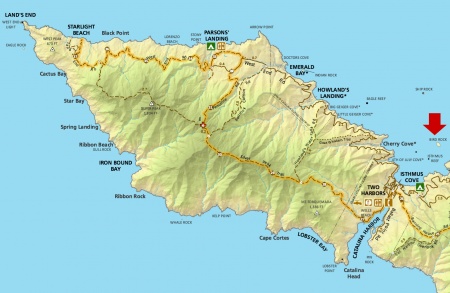 Bird Rock, Santa Catalina Island (Bird Island, Ship Rock, White Rock) is about a half mile off Fisherman’s Cove. The rock, about 300 feet by 500 feet by 20 feet high, is white with guano from pelicans, gulls and cormorants, and has limited vegetation.

Bird Rock, Santa Catalina Island , is also triangulation station set by Stehman Forney in 1875. It is set "on a bold rock off the northwest entrance to Isthmus Cove and about 1 1/2 miles from the beach in the cove, at the south end of the long narrow top. The position of the station is both difficult and dangerous, owing to the cramped space and the loose and treacherous rocks which were continually giving way underfoot. By watching the swells in the harbor a good landing can be effected on the southwest corner of the rock, whence the top can be reached by climbing from ledge to ledge. The station was marked by a piece of iron, circular in form, 3 inches in diameter, 5 inches long, with leaden bolt and iron spike in its top, placed in a crevice in a rock, and wedged and held in place by small pieces of rock. Four holes were drilled in large bowlders [sic] to the north, east, south, and west, and filled with lead, with copper tack in the center of each bolt, at the following distances from the center; north, 47.00 inches; south, 45.25 inches; east, 47.60 inches; west, 38.70 inches." [Annual Report of the Director, U.S. Coast & Geodetic Survey, 1904]

In 1894 the Banning brothers built a small cabin on Bird Rock to establish homestead rights. It burned. Today Bird Rock is privately owned. It was purchased from the United States government in 1925 by three men for $138. William Wrigley, owner of adjacent Santa Catalina Island, sued, and a three-year-long court battle ensued. It was determined that Wrigley did not, in fact, own Bird Rock. After the costly lawsuit, the three investors took in fourth partner, Frank Caffey. They developed plans for an offshore gambling casino, during the time Wrigley’s large casino at Avalon was under construction. It opened in 1929. With the stock market crash of 1929 and the great depression that followed, Bird Rock development plans were laid to rest.

White Rock Island is For Sale
Small island off Santa Catalina is home to many birds
Also known as Bird Rock, White Rock Island is a small, 1.3-acre island about 1500 feet off the mainland side of Isthmus Cove on Catalina Island. The owner, TV director Michael Caffey, is offering it for sale for $875,000.
The island is a popular dive site and has been used for a number of film shoots. It’s also home to a variety of birds. White Rock Island has been privately owned since the 1920s, and though there have been plans for development, including a casino and a yacht club, none have materialized. Due to the regulations put into place by the California Coastal Commission, which works to preserve sensitive habitats and ensure the health of coastal waters, owning White Rock Island might be the perfect opportunity for anyone interested in conservation. The current owner, Caffey, who is now 80, inherited the property from his father, and prefers to sell it rather than pass it on to the next generation. If you’re interested in learning more about owning this little piece of island paradise just off the coast of California, Bud Mauro and Susan Miller of Rodeo Realty are the listing agents.

BIRD ROCK: “About a half-mile off Fisherman's Cove. It appears above the channel waters as an oval, rounded, cemented rock about 300 by 500 feet in extent and 20 feet high. The rock is white with guano and bare except for a limited patch of vegetation on the southeast side. The vegetation consists mostly of Opuntia among which grows about forty individuals of Cosmos gigantea, six shrubs of Lavatera, and a few plants of Malva rotundifolia. This rock is doubtless the original Catalina station for Lavatera and the place where it grows naturally. Ship Rock (often called Bird Rock), lies about a mile out to the northwest from Bird Rock. It is 66 feet high and devoid of vegetation. The oldest fisherman of these waters claims that there never were, to his knowledge, any plants on it. Lyon claims it to be the station for Lavatera.” [Millspaugh & Nuttall Flora of Santa Catalina Island (1923)].

They had 13 children! (heirs to Bird Rock)

1897: “…On a rock three miles distant from Bird Island, Lavatera assurgentiflora grows in about the same state as on Bird Island. Bird Rock—sometimes called Ship Rock, from its resemblance to a ship in full sail— still seaward from Bird Island, has had no sign of plant life for the last ten years, so I am told by a reliable fisherman, who makes frequent visits out there. There are no other islets about Catalina...” [Blanche Trask Field Notes from Santa Catalina Island in Erythea 7:140, 1899].

September 19, 1903 [LAT/SCat]: “Harry Hubbard, who has managed the business of the Meteor Boat Company the past season, took a day off yesterday and invited a few of his friends out on the Meteor for a day’s enjoyment. They went first to Ship Rock for a bit of fishing, but not being very successful, they ran in to the Isthmus and consoled themselves with a good hearty lunch, and afterward steamed up to Howland’s, where the party went ashore and investigated the big prospects on the magnificent old trees which were planted more than forty years ago, filling pockets and hats with the ripe, luscious fruit, and also inspecting the huge pumping plant which sends water down to the Isthmus, three miles away…”

July 7, 1909 [LAH]: “Fishing is excellent at Santa Catalina, just at present the best sport being at the Isthmus. Big yellowtail area to be taken between Bird Island and Ship Rock.”

March 12, 1918 [TI/Avalon]: “Bird Island, off the entrance to Isthmus Bay, is a huge rock. It is comparatively level and is about one acre in extent. It took its name from the vast number of birds which made it their home. When the Banning Company began improving the Isthmus, it became apparent what a coin of vantage Bird Island might become in the hands of unscrupulous persons as a ‘Monte Carlo,’ or for other evil purposes, and the company forestalled any such contingency by taking possession of the little island.”

September 22, 1960 [The Catalina Islander]: “Owner of Bird Rock passes away. Mrs. Helen Kaye Webb, 63, owner of Bird Rock or White Rock, passed away Wednesday of last week at her Bel Air home, following a heart attack. Services were held on Saturday at the Wee Kirk O' Heather, Forest Lawn. Mrs. Webb, active in social and Navy circles, leaves her husband, Capt. Leland D. Webb, USN, retired, and a sister, Mrs. Margaret Denman of Auburn. Mrs. Webb purchased Bird Rock with Valentine Script, issued by the Government to reimburse American property losers, after the Mexican War. The transfer was made from the War Department to Mrs. Webb in 1930. Bird Rock is located at the entrance to Isthmus Cove, is about one half mile from shore, and is two acres in size. Always uninhabited, the rock remains a resting place for sea gulls and other migratory birds.”

December 10, 2010 [LAT]: “TV director Michael Caffey has listed an island off Santa Catalina Island for sale at $875,000. White Rock, also known as Bird Rock, sits on the north side of Catalina about 1,500 feet off the mainland side of Isthmus Cove. The popular dive site is home to a variety of birds and has been used as a location for film shoots. The 1.3 acre island has been privately owned since the 1920s. Plans for the site have included a casino and a yacht club, but none ever came to fruition. Caffey inherited the property from his father and has enjoyed the novelty of owning it, even though he has not been able to do much with the property because of California Coastal Commission regulations.”