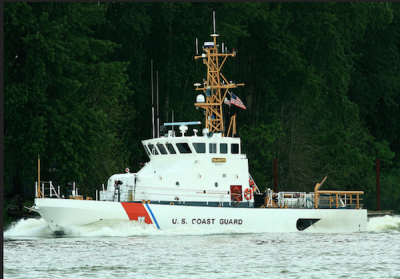 Blackfin (#WPB87317) (2000+), 87-foot U.S. Coast Guard cutter built in Lockport, Louisiana at a cost of almost $4 million dollars and commissioned May 4, 2000. Blackfin replaced the Point Camden that was decommissioned in Santa Barbara in 1999. Blackfin has a 720-mile nautical range and carries 10 crew. Her area of responsibility is from Dana Point to San Simeon and out 200 nautical miles, an area encompassing over 60,000 square miles of ocean, including the California Channel Islands. Her primary missions include Search and Rescue, Homeland Defense, Enforcement of Laws and Treaties, Environmental Protection and Defense Readiness. She was named for a submarine that participated in World War II.