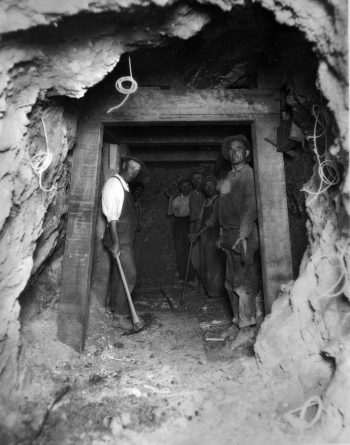 Interior of the Blackjack Mine, Santa Catalina Island, October 16, 1935 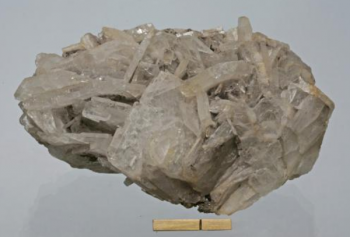 Blackjack Mine, Santa Catalina Island is a formerly active lead (Pb); zinc (Zn); silver (Ag); and copper (Cu) mine located in sec. 24, T9S, R15W, SBM, on the northeast slope of Black Jack Mountain, 14 miles NW of Avalon. Established in 1923 by David Malcolm Renton, it was the principal mine on the island, where a vein, 4 to 25 feet wide, dips 60° NE. In a large vein of hornblendite and schist, galena, sphalerite, pyrite, and traces of chalcopyrite and arsenopyrite occur, with quartz, barite, calcite, and a little fluorite.

The mine workings include a three-compartment vertical shaft 535 feet deep with levels at 400 and 500 feet and an adit on the vein. From the adit was sunk a winze with levels at 100, 200, 300, and 400 feet. Underground workings total about 5,000 feet, the longest drift being 390 feet on the 500-foot level. The first ore shipment was sent to smelters with about twenty tons of raw ore containing silver, lead and zinc. Best values were recovered from an ore shoot 6 to 12 feet wide developed from the 400-foot level to the surface; this ore shoot was 25 feet wide at the 500-foot level.

Blackjack Mine reached its height of operations from 1919-1929. The minerals were extracted from the mine and carried by ore cart along a precipitous skyway down to the processing facility at White’s Landing where the finished material was then taken by barge to the mainland.

Almost all of the lead-silver-zinc ore that has been produced in Los Angeles County has come from deposits on Santa Catalina Island.

May 4, 1925 [San Pedro News Pilot]: “Catalina Mines are Productive. Avalon, Cal., May 4 —Wise-acres of the Pacific Coast openly stated, when Wm. Wrigley, Jr. bought Catalina Island, that this investment he made was "quite speculative." But besides creating tourist business for the Island to an extent hitherto undreamed of, Mr. Wrigley has, during the past six months or more, developed a number of silver and lead mines, the output of which is not only assaying very satisfactorily and profitably, but the amount of "pay dirt" in sight will bring in a handsome revenue for years to come. In regard to his "Black Jack" silver mine on the side of the mountain by the same name, Mr. Wrigley stated that complete electrification will shortly be accomplished. This mine is three miles from Avalon by direct line but twelve miles by roadway. It is 1500 feet above sea level. Poles for the wire tension line from Avalon have already been erected, with wires to be strung within a month. The process of electrifying this Black Jack Mine includes electric blowers, hoists and fans. A road has been constructed from the mine to tide water at White's Landing and the ore is brought on auto trucks from the mine to the boats, it being a down hill run of about three miles. So far only surface veins have been followed, but Mr. Wrigley proposes to sink a 200 foot shaft and laterals just as soon as the electrification process is complete. The ore is shipped from Catalina to the smelters at Shelby, Cal., near San Francisco, and some of it has run as high as $200 a ton, the general run averaging around $125 to $150. ”