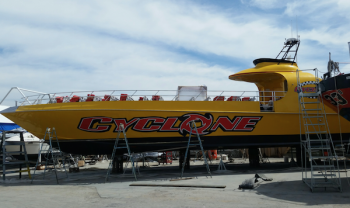 Cyclone, replacement for the Blanche W,
at the beginning of her career
Santa Catalina Island, 2017 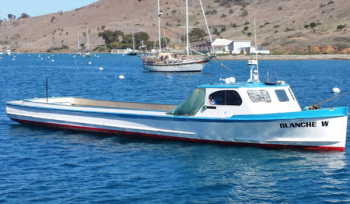 Blanche W at the end of her career
Santa Catalina Island 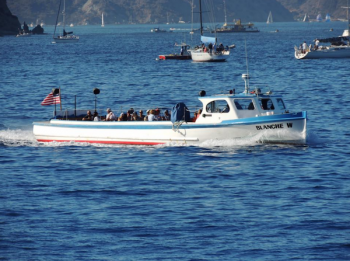 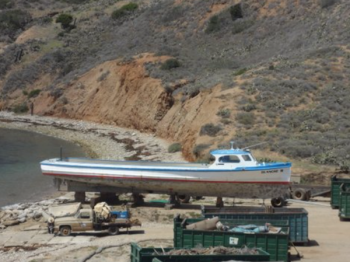 Blanche W hauled out at the end of her career
Santa Catalina Island, 2016

Blanche W (#223697) (1924-2019), 64-foot wooden vessel originally built by William Muller in 1924 for flying fish tours during the summer seasons at Santa Catalina Island. It was one of five boats commissioned by William Wrigley, Jr. for construction after World War I. (The others were Phoenix and Princess.) Blanche W was named for William Wrigley, Jr.'s, granddaughter, Ada Blanche Wrigley. The Blanche W arrived in Avalon Bay in June 1924 from the William Muller Boatyard in Los Angeles Harbor. The mahogany pew-style bench seats accommodate 98 passengers. The boat cruises the islands coastline at night, attracting flying fish with two 40-million candle-power W.W.I spotlights. The spectacle of the fish leaping out of the water is remarkable. For 91 years the vessel served the island.

“Week after week, year in and year out, the Blanche W has transported millions of visitors on sea-going excursions around Santa Catalina Island. In 1924 she was without the cabin she now has and boasted only an open cockpit with a wooden spray shield and removable windows to buffet her first captain, George Gemilere, Sr., from the occasional winds and sea conditions. In 1942 she found herself in the hands of the U.S. government and spent World War II in the unfamiliar waters of the San Francisco Bay-Stockton area where she worked constantly at shuttling shipyard employees. When she returned from her war-time service in 1946 she was battered and worn; but her integrity was found to be intact and she was lovingly restored.” [Water Lines 4th Q., 1995].

Luminaries including Winston Churchill, Sir Arthur Conan Doyle and many Hollywood celebrities were among her passengers.

In 2015 Blanche W was the oldest vessel registered at Avalon Harbor — an inspected passenger vessel of 15 tons, owned by Santa Catalina Island Resort Services, Inc. boatinfoworld.com She was retired after the summer season of 2015. The Catalina Island Company donated 21 of her mahogany benches to the Catalina Island Museum where they are on rooftop risers in the outdoor theatre.

After serving the island for 91 years (1924-2015), Blanche W languished on a mooring at Catalina [Cat] Harbor until 2019 when she was dismantled and hauled to a mainland landfill.

September 20, 1932 [LAT]: “Captain Clause Walton, port captain for the Wilmington Transportation Company’s pleasure fleet at Avalon, yesterday brought the glass-bottom boat Empress from Catalina Island to undergo annual overhaul at the yards of the Wilmington Boat Works. The craft will return tomorrow. She will be followed for overhaul by the glass-bottom Princess and Phoenix and by the searchlight boats Betty O and Blanche W.”

March 12, 1936 [TI/Avalon]: “It has not been advertised yet, so far as The Islander knows, but Avalon residents and visitors will be interested to know that the Blanche W is making a round trip to The Isthmus every Sunday. The boat leaves the Pleasure Pier at 9:00 A.M., allows a stay of one hour at the Isthmus, and on the return trip arrives at Avalon at 1 P.M. This is something new in winter service.”

September 1, 1955 [TI/Avalon]: “Blanche W rescues shipwrck victims. The passengers aboard the "Flying Fish Boat" for their money's worth Saturday night when they witnessed and actually took part in the rescue of ten persons from the dark sea. The 38-foot Starbright from Newport foundered because of failing bilge pumps a quarter of a mile off Seal Rock and the ten persons aboard went into the water. Two of the swimmers reached shore but the rest, including some women, were still struggling when the Blanche W on its way back from its regular trip accidentally picked out the couple in the big light. Correctly interpreting the frantic signals from shore, the crew of the Blanche W cast around with the huge spotlight and got every person in the water safely aboard. The ten men and women suffered no more than the effects of exposure to the chilly water, according to a report from the hospital. Spokesmen for the rescued people were lavish in their praise of Capt. Hernandez, Johnny Williams and Andy Hernandez and the passengers who lent a hand. The quick and skillful manner in which the rescue was accomplished and the vigilance displayed in summing up the situation so promptly, undoubtedly averted tragic consequences they said.”

May 2015 [SCINews]: “Summer of the Blanche. Our wonderfully iconic Blanche W will be saying goodbye to her millions of fans at the end of this summer. Built in 1924, The Blanche as we call her, has grown old and beyond being able to repair and maintain her to the standards of the U.S. Coast Guard. The Blanche was built in 1924 on Mormon Island in Wilmington Harbor for the Santa Catalina Island Company. William Wrigley, Jr. named the boat Blanche W after his one year old granddaughter, Ada Blanche Wrigley. It was specifically built for the flying fish tour and to create a boat faster than it's major competitor, the Catalina Flyer, owned by Captain Joseph McAfee who originated the flying fish tour. Throughout the summer special events will be held in honor of the Blanche. Watch for special announcements.”

September 7, 2015 [LAT]: “The old ship backed out of Avalon's cozy harbor for one of the last times and swung southeast to begin prowling the night waters along the eastern coast of Santa Catalina Island. The 35 passengers aboard the Blanche W sat on gleaming mahogany benches on this cruise to see flying fish. Deckhand Maui Hernandez scanned the waves with a 40-million candlepower carbon-arc searchlight that came from a World War I battleship. "There's some!" she shouted. The passengers whipped around to see dozens of wriggling black-and-silver missiles soaring over the water. One rose about 7 feet, hovered like a butterfly and landed with a splash. Another torpedoed the side of the boat. Yet another glided into the gaping bill of a hungry pelican. More than 1 million customers have boarded the Blanche over the last 91 years to witness similar sights. Tonight's passengers will be among the last. Her long run as the host of the island's "Flying Fish Voyage" will end at the close of September. "The Blanche is not being taken out of commercial service because she's old and slow," said Collier Cook, a vice president for the Catalina Island Co., which owns the vessel. "It's because she is no longer commercially viable." Ticket sales have been unable to offset the rising costs of keeping the 64-foot-long wooden-hulled boat in shape for the open ocean. Tickets for adults are $30 each. The Blanche launched nine decades ago as one of many amenities William Wrigley Jr. added to the tiny harbor community of Avalon, transforming the island into a storied getaway for movie stars and the early power brokers of Los Angeles. The name was taken from Wrigley's first grandchild, Ada Blanche Wrigley, who died in 2010. Until the 1960s, when Catalina development slowed as big spenders and tourists gravitated toward newer attractions blossoming on the mainland — Disneyland, Palm Springs, Lake Arrowhead — the Blanche was among the most exciting rides in the region. Now, the vintage vessel is a symbol of ties to a simpler time, when the Catalina Island Co. commanded a proud fleet of sightseeing boats that included the Cleopatra, the Phoenix and the Betty-O. "Back in the day, we handed out T-shirts with big red bull's-eyes on them to passengers who got clobbered by flying fish," said Capt. Michael Armstrong, who has manned the Blanche's spiked wheel for 12 years. Flying fish spend most of their time in the open ocean but come close to shore at night to forage and lay eggs in the protection of kelp beds. The flying fish commonly seen around Catalina, which scientists know as Cheilopogon pinnatibarbatus californicus, has large scales, a forked tail and grows to 18 inches long. They glide on extended pectoral fins that resemble wings and keep their bodies aloft until they hit the water with a splash. Hernandez never tires of the sight. "Seeing little kids' faces light up when they zoom past reminds me of how awesome my job is," she said. "So amazing," said passenger Chris Josef, 40, of Studio City. "They're like birds, or maybe big butterflies." After an hour on the open ocean, the Blanche swung back into her moorage in Avalon harbor, sharing the scene with sleek cabin cruisers, commercial fishing vessels and sailboats. Later this month, the Blanche will be sent to dry dock for maintenance, then reassigned as a private tour boat for the Catalina Island Co. "The Blanche means an awful lot to us," Cook said. "We'll always treat her with the utmost respect."”

2020 [TI/Avalon]: “Blanche W (1924 to 2019) Passages: Often referred to as the biggest little boat on the Pacific Coast, the motor vessel Blanche W was an excursion boat extraordinaire that faithfully carried over a million passengers in the waters around Catalina Island during her 91 years of service. Although Blanche W offered many tours, she was especially known for showing voyagers that fish really can fly. Commissioned in 1924, Blanche W.’s open boat design was perfect for short sightseeing tours around the island. She was built in Wilmington, California, under the watchful eye of William Wrigley Jr., and she bears the name of his granddaughter. Blanche W’s decommissioning took place in 2015, after determining that she was no longer financially viable. In boating terms that means it would cost less to buy a new boat than restore this island legend. Following hoopla and accolades, Blanche W quietly made her last passage from Avalon, around the back side of the island, to Cat Harbor, where she spent her last seasons tied to a mooring. Blanche W sustained major damage to her old wooden beams while hauling her out of the water at Wells Beach, a small maintenance yard inside Cat Harbor. She rested peacefully on shore awaiting her fate. While there were rumors that the Catalina Island Company or the Catalina Conservancy might raise funds to restore her, this was not to be. Sadly, trusted sources confirmed that in the spring of 2019, Blanche W. was unceremoniously dismantled and her remains are reportedly in a mainland landfill. Another Catalina icon is lost forever.”