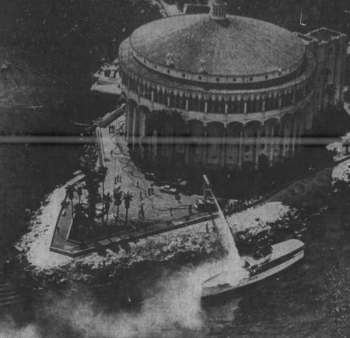 Yacht ablaze—Hose from shore-based fire engine plays stream of water on the burning 120-foot Brodie, just off Avalon's Casino where it was towed by another boat after all aboard were rescued.

April 12, 1965 [LAT]: “12 Saved From Burning Yacht Off Catalina. Nine passengers and a crew of three were rescued from the luxury yacht Brodie a mile off Santa Catalina Island shortly before noon Sunday when a raging fire swept the 120-foot vessel. The blaze roared unchecked for nearly two hours until the Brodie was towed within 20 feet of the beach, near the casino at Avalon, where shore-based firefighters finally gained control over the flames. Charles Sitwell, president of the Catalina Steamship Co. and owner of the Brodie, watched the spectacular fire from the shore at Avalon with a throng of others. The passengers were taken off in a dramatic rescue engineered by Robert Prospter, captain of the 65-foot sport fishing boat, The Islander, on a day-long charter trip out of Pierpont Landing, Long Beach. The three crewmen were removed from the flaming ship a few minutes later by a smaller craft that was standing by. The passengers were identified as Shirley P. Rosenbaum, 53, of 3132 Glendon Ave., West Los Angeles; his wife, Victoria, 38, and their twin daughters, Elise and Elaine, 14; Albert Perrish, 50, of 869 Malcolm Ave., West Los Angeles; his wife, Leora, 32, and their daughters, Audrey, 10, and Cathy, 9, and Peggy, 11. The Brodie's captain, R. Hulett Barnes, 46, of 11811 Center St., San Pedro, said the fire was caused by a short circuit of the electrical system near the stack. He was taken off the craft along with his crewmen, Ernest Marshall Allen, 55, of 920 McFarland Ave., Wilmington, and Jack Bailey, 41, who lived aboard. The Brodie stayed afloat with its hull intact, but damage was estimated at $100,ooo, principally to the wrecked forward superstructure. "We were about 200 yards off to starboard of the Brodie, said Capt. Prospter of The Islander, "when we saw smoke and a woman yelled that the vessel was on fire. "I stood by for about five minutes to see if the captain of the Brodie could get the fire under control. Then it broke big. The women grew panicky — I didn't blame them —and the children were frightened. I put the bow of my vessel to the stern of the Brodie — they're about the same height — and my crew helped the passengers step from one ship to the other. "There was no wind, and the sea was quiet, so it was no problem." Capt. Prospter said the harbor boat then came alongside and took the nine passengers ashore. "They'd calmed down by then, realizing no one was going to get hurt," he said. A 30-foot yacht took the crew off the Brodie while a converted tug, the Can Do, skippered by Al Hanson, too the Brodie in tow and pulled her close enough to the shore for land hose lines to be played on her. Clinton Scovel, Avalon harbor master, said that course was followed because efforts to fight the blaze at sea from another boat had failed. The Coast Guard dispatched a cutter and a helicopter to the scene. Stillwell acquired the Brodie only recently, friends said. Those aboard were on a weekend cruise from the mainland to Avalon. Perrish was identified as an executive of Winter Wolff & Co., steel imports, at 2036 E. 27th St., Los Angeles. ”