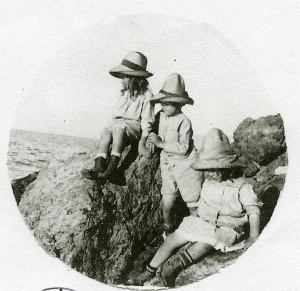 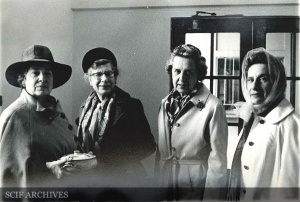 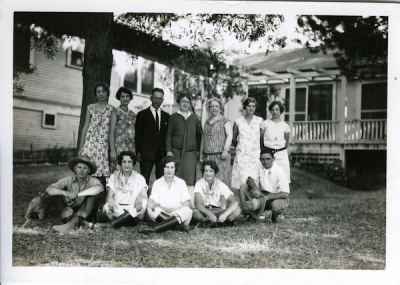 Vivienne Caire married John P. Chiles in 1940, and they had four children:

November 27, 1927 [OT]: “A number of smart teas have brightened the social calendar during Thanksgiving week. The younger set foregathered Tuesday afternoon for tea at the home of Mrs. Frederic F. Caire of Lee Street who with her daughters, Miss Helen and Miss Delphine Caire, entertained in compliment to the two elder daughters of the household, Miss Albina and Miss Marie Caire, who have been in Europe for some length of time. A number of the younger set with Miss Vivienne Caire assisted in receiving.”

July 19, 1940 [OT]: “Miss Caire Announces Betrothal. Oakland Girl Will Wed John Preston Chiles of Piedmont. At a delightful family gathering Tuesday evening last, the betrothal of Miss Vivienne Caire and Mr. John Preston Chiles was announced informally. The charming bride-elect told the interesting news for the second time at a tea given on the following afternoon by her mother, Mrs. Frederic Caire, at her home on Lee Street. The tea was a formal affair and the Caire home was beautifully decorated with flowers for the event. Pink and rose colored blooms were used in the drawing room and the dining room and in the hall flowers and foliage in russet tones were used. Receiving at the tea with their mother were the bride-elect's sisters, Jeanne, Marie, Helene and Didi Caire. Both Miss Caire and her fiance represent old California families. She is the granddaughter of the late Mr. and Mrs. Justinian Caire and the late Mr. and Mrs. Jerome Suich. Miss Caire is a graduate of Miss Ransom's School of Piedmont and attended the University of California. Her sorority is the Alpha Phi. Mr. Chiles' parents are Mr. and Mrs. Frank Chiles, and he is a grandson of the late Mr. and Mrs. Isaac Skinner Chiles, pioneers in the Sacramento Valley. His maternal grandparents were the late Mr. and Mrs. Henry Buneman of San Francisco. The wedding of the couple will take place in the early Fall.”

December 15, 1940 [OT]: “Descendants of Pioneers Are Married. Old Families United by Caire-Chiles Ceremony. The marble altars of St. Francis de Sales Church were adorned with white chrysanthemums and fern and heavy golden candelabra supporting the myriads of cathedral candles for the wedding of Miss Vivienne Caire and Mr. John Preston Chiles at 4 o'clock yesterday afternoon. Society from the Bay area and Southern California was represented at the wedding ceremony. The Right Reverend Monsignor Joseph M. Gleason officiated in the presence of several hundred guests. Mr. Frederic Felix Caire escorted his daughter to the altar. She was gowned in white satin in Princess style with a heart shaped neckline and long sleeves outlined with diamond-shaped openings. The skirt was finished with a short train. The lovely finger tip wedding veil was held in place with a coronet and cap of rosepoint lace which had been worn by the bride's mother. A shower bouquet of lilies of the valley completed the ensemble. Miss Jeanne Caire was the only attendant upon her sister and was gowned in Copenhagen blue crepe, the bodice tucked and attached to a full skirt. She carried a bouquet of cyclamen and begonias in orchid and rose. Stone blue crepe with a beaded bodice was worn by Mrs. Frederic Felix Caire, mother of the bride. A small veiled hat completed her outfit. Mr. Todd Arvold was best man for Mr. Chiles. The ushers were Messrs. Gardner Chiles, brother of the bridegroom; Walter McLaughlin of Sacramento and Robert Prael and Justinian Caire II, a cousin of the bride. White and gold was the theme of the decoration of the Caire home on Lee Street where a reception was held.

Home in Berkeley. College affiliations of the bridal couple are at University of California from which both were graduated. The bride is an Alpha Phi. Mr. Chiles was also a student at St. Mary's College. He is the son of the late Mr. and Mrs. Frank Chiles. Parents of the bride are Mr. and Mrs. Frederic Felix Caire of Lee Street.”

August 26, 1947 [OT]: “Party Follows Son's CHristening. Sunday week, the infant son of Captain and Mrs. John Preston Chiles was christened, the rite performed in St. Francis de Salas Catholic Church by the Right Rev. Monsignor Richard O'Donnell. God parents for the baby were "DiDi" Caire, his aunt, and a cousin, Robert O. Prael Jr. The baby will be called Frederic Caire Chiles, after his maternal grandfather. Following the ceremony, the proud parents received family and friends at the Caire home on Vernon Heights. It is the first time in three years that Bay area friends of Captain Chiles have had an opportunity to welcome him. Mrs. Chiles came West last summer with her little daughter, Mary. The Chiles have taken an apartment in Oakland. They have been in New Jersey for some time.”

August 10, 1957 [OT]: “Caire Family Back After 14 Years in East. The return of Capt. and Mrs. John Preston Chiles from Woodcliff Lake, New Jersey, to California after an absence of 14 years on the Atlantic Coast, is good news to their family and friends living in the Bay Area. Save for several visits to her former home within that period, her friends have seen little of the former Vivienne Caire, daughter of Mrs. Frederic Felix Caire, who now makes her home in the Marina district in San Francisco, and the late Mr. Caire, former Oaklanders. The Chiles have five children, James, Johnny and Ricky Chiles, and Mary B. and Catherine Chiles, who at present are enjoying the summer with their parents at Pacific Grove, where they have taken a cottage for six weeks. The Chiles hope to settle in the Eastbay, preferably in Piedmont, and returned this weekend for a brief visit with Mrs. Caire, and to house hunt. Both Capt. and Mrs. Chiles are members of pioneer ranching families of California. She is a granddaughter of the late Mr. and Mrs. Caire of San Francisco and a niece of Mrs. A. J. Caire of Harbord Drive. The Caires at one time were owners of Santa Cruz Island off the coast of Santa Barbara. The Caire home here was on Lee St., before Mrs. Frederic Caire and her daughters moved across the Bay. Capt. Chiles is a grandson of the late Mr. and Mrs. Isaac Skinner Chiles of the Sacramento Valley, and a son of the late Mr. and Mrs. Frank Chiles. He has been superintendent of shipping on the Atlantic President lines, and has been transferred to this coast.”

March 24, 2002 [SFGate]: “CHILES, Vivievne Caire - Former resident of Piedmont and Inverness; passed away after a brief illness on Feb. 25, 2002 in Grass Valley, CA. Born in Oakland to Frederic and Lillian Caire, Vivienne was a second generation Californian, whose grandfather was S.F. Bay Area pioneering entrepreneur, Justinian Caire. The youngest of five daughters, Vivienne grew up in the family home on the north side of Lake Merrit. She received her early education at Convent of the Holy Names, and attended both Piedmont High and Miss Ransome's, graduating from that school in 1928. She went on to UC Berkeley, where she was a member of Alpha Phi Sorority. For several years she was employed at U.C.'s Bancroft Library, where she worked with the eminent California historian, Dr. Herbert Priestly. She married John P. Chiles, descendant of a pioneering Sacramento Valley family, in Oakland on Dec. 14, 1940. During WW II, she moved to the East Coast to be closer to her Merchant Marine husband, who was commandeering Liberty Ship convoys across the Atlantic. After the War, she and John (now Port Captain for APL,) settled in rural New Jersey with their growing family. In 1957, they moved back to Piedmont with their five children, where they remained until 1977, when they retired to the West Marin town of Inverness. They were active parishioners of Sacred Heart Catholic Church in Olema, and longtime Inverness Yacht Club members. Vivienne also belonged to the Inverness Garden Club, Alliance Francaise of the East Bay, California Historical Society, Women's Propeller Club, S.F. Town and Gown Club, and was a board member of the Santa Cruz Island Foundation. She was an avid and discerning reader, gardener, birder, and gourmet cook. Vivienne is survived by her children and their spouses: Mary B. & Charles Brock of Nevada City, CA.; Frederic & Jacky Chiles of London, England; James & Ruth Chiles of Stamford, CT.; John O. & Cyndy Chiles of Piedmont; and James McInerney of S.F; nine grandchildren; and sisters Marie and Helene Caire of Oakland. She was preceded in death by her husband of 59 years, John P, Chiles; her beloved daughter Catherine "Kitty" McInerney; and sisters Jeanne and Delphine Caire. Until 1937, Vivienne spent every summer with her family on Santa Cruz Island, the largest of the Channel Islands, off the Santa Barbara coast. The Island is now managed jointly by the Nature Conservancy and the National Park Service, but in the era of then- owner Justinian Caire and his immediate descendants, Santa Cruz was a "working ranch", and the time they spent there was treasured by the entire family. Vivienne never forgot those long, glorious summer months, when she, her siblings and her cousins, hiked, swam, and rode horseback to their hearts' content. Her Santa Cruz sojourns had a profound affect not only Vivienne's life, but ultimately on the lives of her children and grandchildren as well. They have inherited her fondness for, and appreciation of that unique 19th century Island "Rancho;" lying only 25 nautical miles off, but a world away from, the mainland of 21st century California. A Funeral Mass was said at Sacred Heart Catholic Church in Olema on March 15. Memorial contributions may be made to: Friends of Santa Cruz Island, 79 Daily Dr.. Camarillo, CA 93010; Marin Agricultural Land Trust, P.O. Box 809, Pt. Reyes Sta, CA 94956.”