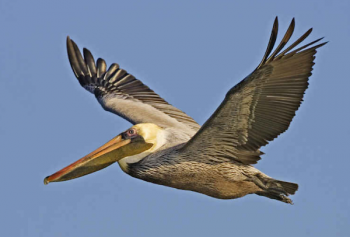 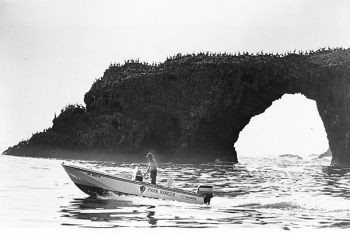 In the late 1960s and early 1970s, a critical Pelican population crash occurred which endangered its future success. With their population depleted first to provide feathers for women’s hats in the 1890s, then by fishermen who feared them as competitors, then by DDT, these graceful fliers, known for their dive-bombing fishing tactics, had been reduced to 748 known nesting sites by the time they were awarded federal protection in 1970.

High levels of DDT concentrated in the birds' eggs which resulted in thin shells which were then crushed by the weight of the parent bird during nesting. In 1970 in a law that predated the Endangered Species Act, the U. S. Fish & Wildlife Service listed the Brown Pelican as endangered—in danger of extinction throughout all or a significant portion of its range. In 1970 there were about 500 nesting pairs on on both West Anacapa Island and on Santa Barbara Island, where the birds nest without danger of disturbance. The Endangered Species Act was passed in 1973 and it included Brown Pelicans on its list. With the Environmental Protection Agency’s ban of DDT in 1972, an immediate response was seen which enabled the pelicans to make a come back. The number of nesting sites increased to more than 11,600 by 2009, when the species was declared recovered under the Endangered Species Act.

“...A white pelican has for years been the pet of a fisherman's family at Santa Barbara. So remarkable is he for his intelligence that tourists go to see and photograph "Larco's pelican" as one of the sights of the city. This one was captured inland, white pelicans preferring fresh water to salt... Jim is a sociable fellow, and the fondles friends and strangers alike, when the latter will permit it, by taking their arm, hand or leg repeatedly between his mandibles. His grip is not strong, but there is a strong, sharp hook at the end of the beak that inspires caution... ”

1886: “The only fisherman in the town was an Italian by the name of Larco, a jolly ruddy faced peasant from the old country who lived at the foot of State Street and plied his trade there. The most important figure on his premises was that of the pelican. For that pelican was a sure fore-teller of storms or sunny skies. If he were at home, sunning himself, then we knew storms were brewing in the offing; but during months at a time, he disappeared entirely, while bright skies lasted. My only chance to speak Italian was with this fisherman and his family, and it was not the best Italian at that.” Elizabeth Eaton Burton My Santa Barbara Scrap Book, [unpublished manuscript].

March 11, 1895 [LAT/SB]: “A beautiful tame pelican, captured by the Larcos and on exhibition at their fish depot on Lower State Street, is one of the novel sights of the day.”

September 1, 1895 [LAT/SB]: “The tame pelican belonging to the Larcos, which has so long been a unique and interesting feature of life in the lower portion of the city, is standing around with a ‘listen-to-my-tale-of-woe’ look, and refuses to play ball or engage in its customary frolics with the children. The Larco cow stepped on its foot, and until it recovers from the indisposition caused by this circumstance it will not slide down the cellar door anymore.”

November 26, 1899 [LAT]: “A San Diego paper reports that quite an industry has sprung up there in pelicans, a small schooner having recently brought 1800 of the birds from the lower coasts to be used in the millinery business. There are said to be millions of these birds along the coast of Lower California, and as they devour an immense quantity of fish, they can easily be dispensed with and sacrificed to the Goddess of Fashion.”

December 3, 1899 [LAT/SB]: “Captain Larco’s pelican returned after wandering through the air for five months. Everybody knows the big white pelican at Captain Larco’s, near the beach, and nearly every child in town has watched it greedily eat the juicy smelt as they were thrown into its expansive pouch, and have seen him angrily chase away with flapping wings, the dogs that came to dispute his ownership of the property. The white pelican has long been one of the attractions of the waterfront, and he is a town pet. Until five months ago the bird had a companion, a grey pelican, that shared the smelt and affections of the youngsters, and joined in the dog wars; but perhaps Jack became a little jealous or maybe he dreamed of his old life on the wing, for one fine June morning he was missing. As the days went by he was given up for lost. Three months later, when Captain Larco was at a fish camp down near Hueneme, he saw a large flock of grey pelicans approaching, and when they were flying by he called ‘Jack.’ It was a foreign hope, but one of the birds left the flock and lighted near the captain. It ate some fish from his hand, and then noticing that his fellow-pelicans were leaving him, he spread his wings and flew away to join them. It was jack, no doubt. Yesterday the Larcos noticed a speck in the sky directly above the yard, at a seemingly great height, and as the speck grew it took the form of a pelican, and as the pelican drew nearer it took the form of Jack, and the long-lost wandered was home again. The captain says that probably Jack found fishing poor since the rains, and has come home to spend the winter, for he knows he will get enough to eat at Captain Larco’s. Perhaps this is intelligence; perhaps it is just instinct. But anyway, Jack is at home to his friends.”

May 5, 1900 [SBMP]: “The big gray pelican, who has made his home at Captain Larco’s for the past three years, returned Thursday evening after one of his sojourns about the channel for a month or more. When his pelicanship made his appearance at the kitchen door begging in his peculiar way for supper, Captain Larco remarked that there was a storm coming, and that the pelican had returned to his old roost to escape it. The usual antics of the elements since his return has proved the old gray pelican a most reliable weather prophet.”

The Birds of San Clemente Island, 1984

1897 San Nicolas Island: “Pelecanus occidentalis—California Brown Pelican. Common at San Pedro harbor, and for several miles out into the channel. Mr. Gaylord saw a flock of fifteen at San Nicolas Island on May 25. A few were seen near Santa Barbara Island on May 13. No signs of nesting were found anywhere... Entire List of Water-Birds Observed. [March 26-April 4; May 11-June 9]. The party [of the second trip] consisted of Joseph Grinnell, who had immediate charge of the expedition, and gave special attention to the ornithology and entomology of the islands; Horace Gaylord, who collected mammals; and Harry Gaylord and James Brittan [Britton] who devoted their time to archaeology. The party left San Pedro harbor May 11 in a large fishing schooner... [returning June 9, 1897]”
Grinnell, Joseph The Islands of Santa Barbara, San Nicolas and San Clemente, in the Spring of 1897 Pasadena Academy of Sciences Publication No. 1, August, 1897 (26 pages).

1897 Santa Barbara Island: “Pelecanus occidentalis—California Brown Pelican. A few were seen near Santa Barbara Island on May 13. No signs of nesting were found anywhere... Entire List of Water-Birds Observed. [March 26-April 4; May 11-June 9]. The party [of the second trip] consisted of Joseph Grinnell, who had immediate charge of the expedition, and gave special attention to the ornithology and entomology of the islands; Horace Gaylord, who collected mammals; and Harry Gaylord and James Brittan [Britton] who devoted their time to archaeology. The party left San Pedro harbor May 11 in a large fishing schooner... [returning June 9, 1897]”
Grinnell, Joseph The Islands of Santa Barbara, San Nicolas and San Clemente, in the Spring of 1897 Pasadena Academy of Sciences Publication No. 1, August, 1897 (26 pages).

1907 Santa Cruz Island: “Pelecanus californicus. California Brown Pelican. Fairly common on both coasts. Adults and birds of the year were noted.” [“At 11:30 p. m., November 19, 1907, my father (H. Linton), Mr. George Willett, and myself left San Pedro harbor in a dilapidated fishing smack and in company with a crawfisherman, one “Cold-foot” Jorgensen. We arrived off the south end of Santa Cruz Island at 10:30 the following day during a stiff norwester. For various reasons we were unable to make camp until the 22nd. It may not be amiss to state here that twice during the blow we were nearly wrecked: once while at anchor in Potatoe Harbor, a broken anchor allowing the boat to drift within the breaker line and nearly onto the rocks. In this instance the timely arrival of Willett and H. Linton in a small boat, saved the day, and incidentally the fishing smack. At another time (the engine having broken down) we were blown nearly onto the rocks of Anacapa Island; but with father at the wheel and Willett and I on the “sheet” we managed to hold her off. I mention the foregoing, and the many sleepless nights spent on the rocky shores, “running” the surf several times each day (with attendant duckings), etc., merely as a warning to those who seem inclined to believe a field naturalists ’ life “strewn with roses”. (Its ’ generally strewn with cacti!)”]
Linton, C. B. Notes from Santa Cruz Island] The Condor 10(3):124-129, May 1908