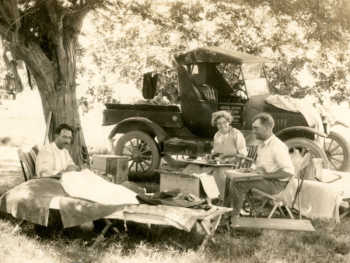 CANFIELD, May (1876-1951 ) born in Arizona, she was one of the only, if not the only female ornithological collectors of her time. She became a member of the Cooper Ornithological Club in 1922.

In the 1910 census, Laurence Huey appears living in her household at age 17 as a boarder. She is referred to as his aunt in one reference.

In the 1930 census, twenty years later, she is listed as divorced and a lodger in the household of Laurence M. Huey.

In the 1940 census, she is listed as widowed, and living with Laurence Huey (47), head of household, listed as her son.

April 29, 1925 [Calexico Chronicle]: “On trip through Baja California. San Diego, April 29.—Starting on a scientific collecting expedition into the northern district of Lower California, two representatives of the Natural History museum, Balboa Park, left San Diego Monday morning in two automobile trucks piled high with equipment and supplies to last them 2-1/2 months in the field. They were Laurence M. Huey, curator of birds and mammals on the museum staff, and his aunt and co-worker, Mrs. May Canfield, both of whom have long experience as collectors of natural history specimens. The expedition planned to make its first camp at Santo Domingo, 200 miles south of Tijuana, after which El Rosario, Sierra San Pedro Martir and San Telmo will be visited. A pack train will be required to convey the collectors and their outfit into the San Pedro Martir mountains, but the rest of the trip can be made by automobile. The object of the expedition is to make general faunal survey of the region. Stops at each camp will be long enough to make thorough record of the birds and mammals. Although the northern district of Lower California has been visited by other scientific collectors in the past, their travels have usually been rapid and it is believed that much of scientific importance still remains to be discovered. The present expedition plans to return in the beginning of July after which the results of its findings will be published and the museum's collection, it hoped, enlarged by many new specimens and exhibits. The expedition is made possible by courtesy of the Mexican government, which has issued from the department of agricultura y fomento a special permit for the museum's collectors. Huey is a brother of Malcolm Huey of Calexico.”