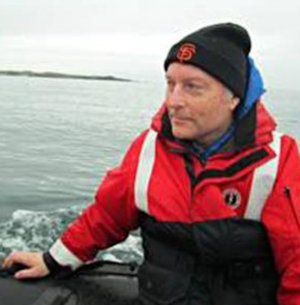 Harry Carter was member #186 of the ALL EIGHT CLUB of the Santa Cruz Island Foundation.

May 19, 2017 [Victoria Times]: “ Harold (Harry) R. Carter III, 61, perished April 30, 2017, in Victoria B.C., of metastatic melanoma. Harry was preceded in death by his adventurer father, Dr. Harold (Harry) R. Carter II, and devoted mother Anne Carter (nee McMillan). Survived by his partner in love and life, Emma, daughter Tegan, brothers Ross (Cindy-Wynne), John (Helen), Bruce (Leslie), niece Lindsay (Jesse) and nephew Jason (Shannon), aunt Miriam Hughes (nee Carter), dear cousins both near and far and many, dear and close friends. Born in Brooklyn, New York, Harry grew up in Victoria. He graduated from Oak Bay High School where he was a star baseball, soccer, and rugby player. He earned a Bachelor of Science, Biology, from the University of British Columbia (1978). During his undergraduate years, Harry had the great fortune to intern for the British Columbia Provincial Museum, igniting his lifelong passion for the study of seabirds and allowing him to pursue research and experience great adventures with his trusty mates on the M/V Tedmac. Harry attended the University of Manitoba (1979-1982), earning a Master of Science degree while conducting one of the first studies on the rare Marbled Murrelet along coastal BC. In 1983, Harry moved to Northern California, working for Point Reyes Bird Observatory and later Humboldt State University, continuing his study of seabirds and leading efforts in the conservation of several at-risk species along the coast of California and Oregon. Harry returned to British Columbia in 2003, where he started Carter Biological Consulting and continued his study of seabirds and efforts to spearhead seabird conservation working for government and non government organizations. He was an internationally respected seabird biologist and conservationist, he authored and co-authored over 200 scientific papers and reports, working on projects in BC, California, Oregon, Alaska, Baja California (Mexico), Japan, and South Korea. The stuff of seabird biologist legend, he achieved impossible and improbable things. Harry's remarkable contribution to seabird biology and conservation was recognized, notably by the American Ornithologists' Union: Elective Member (2009), the Apex Houston Trustee Council: Wildlife Restoration Award (2003) and Gulf of the Farallones National Marine Sanctuary's Environmental Hero Award (2003). Most recently (2017), Harry was honored with the Lifetime Achievement Award by the Pacific Seabird Group, in recognition of his tremendous and life-long contribution to seabird conservation. Natural collaborator, most generous mentor to many, Harry left to mourn a large and loving family, a flock, of close friends and colleagues who were inspired by his contagious passion, boundless enthusiasm, never ending hope and optimism, resolute dedication and commitment, generous and forgiving spirit, wit and good humour, kindness and grace, unwavering loyalty and constant concern for the wellbeing of others. He was a good and gentle man who made life richer for so many. He will be immeasurably missed. A celebration of life will be held June 24, 2017 at 2 PM at the University of Victoria, University Club and late August in the San Francisco Bay Area. In lieu of flowers please consider a donation to an organization of your choice dedicated to protecting the environment Harry held so dear.”