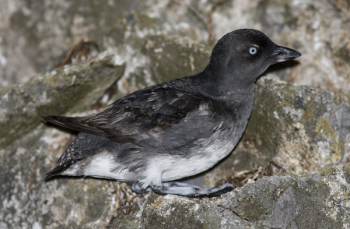 Cassin's Auklets have been collected on all eight California Channel Islands.

“where there was any soil, it was full of burrows in every direction, made by Cassin's Auklets...”.

R. H. Beck collected one set of eggs on 18 May 1897 (WFVZ uncat.), possibly on an islet or rock other than Prince Island. Burt (unpubl. notes in WFVZ) and Appleton (unpubl. notes) state, respectively, that on 6 June 1906:

“the island was almost honeycombed by the birds' burrows” and “at least 1,000 pairs breed here”.

1910-1975 San Miguel Island: Ten sets of eggs were collected in June 1910 on Prince Island (WFVZ 4368, 6154, 76184 and uncat.), and Willett (1910) and A. Jau (unpubl. notes in WFVZ) found them to be abundant on the island at this time. Wright and Snyder (1913) found “a very large colony” which “nested on the northwest and north slopes” of Prince Island. J. Van Denburgh found only about 100 pairs of Cassin's Auklets (unpubl. notes in WFVZ) from which he collected 11 sets on 19 May 1919 and J. R. Pemberton and D. S. DeGroot found only 50 pairs breeding here (DeGroot unpub. notes) on 31 March 1927 and took 12 sets (SBM uncat. WFVZ 61969-61976, 2600, 2601). Specifically, Pemberton (unpub. notes) mentions two separate small colonies on the north and werst sides of Prince Island. It is unclear from his notes whether his estimates are of numbers of burrows seen, active burrows examined or some other parameter. Nevertheless, the figures are far lower than any other estimates prior to or since those dates (see Ainley and Lewis 1974, for discussing of dramatic short-term population fluctuations on the Farallon Island). Cassin's Auklets were once again very common in 1939. Though Sumner and Bond (Sumber 1939) saw no birds when they visited Prince Island on 18 April, they found “a considerable number of fresh burrows”. Craig and Sheppard (unpubl. notes) estimated 3,000 pairs on 27 July 1965. Personnel with the P.O.B.S.P. in 1968 (Huber 1968) estimated 1,500 nests on Prince Island, a number only 1/7 of our estimate in 1975. They did not find auklets nesting on the flat top of the island, whereas we found numerous active burrows there in the ice plant. They did not determine the status, nor even mention the presence, of auklets on Castle Rock in 1968 although they landed there. We could see numerous burrows on the islet from our boat in 1975. These data suggest that auklets were more abundant in 1975 than in 1968, though P.O.B.S.P. estimate of only 1,500 nests on Prince Island is probably low. Our original estimate was of 1,500-2,000 on Prince Island in 1975; however, density area censusing revealed many more borrows present than we had suspected and we revised our estimates to 10,000 pairs.” [Marine Mammal and Seabird Survey of the Southern California Bight, Volume 3, Issue 3. University of California Santa Cruz et al., July 1978]”

1897 San Nicolas Island: “Ptychoramphus aleuticus—Cassin's Auklet. Large numbers of these birds were seen during the day off San Nicolas Island, between it and Santa Barbara Island, but no breeding colony was discovered on the former... Entire List of Water-Birds Observed. [March 26-April 4; May 11-June 9]. The party [of the second trip] consisted of Joseph Grinnell, who had immediate charge of the expedition, and gave special attention to the ornithology and entomology of the islands; Horace Gaylord, who collected mammals; and Harry Gaylord and James Brittan [Britton] who devoted their time to archaeology. The party left San Pedro harbor May 11 in a large fishing schooner... [returning June 9, 1897]”
Grinnell, Joseph The Islands of Santa Barbara, San Nicolas and San Clemente, in the Spring of 1897 Pasadena Academy of Sciences Publication No. 1, August, 1897 (26 pages).

1897 Santa Barbara Island: “Ptychoramphus aleuticus—Cassin's Auklet. This bird was breeding in large numbers on Santa Barbara Island. The southwest side of the mesa from the top of the bluff to the summit of the hill was crowded with their burrows. On the evening of May 16, Mr. Gaylord and I went over to this colony. Not a single bird was to be seen above ground during the day, nor even until quite dark; but by 8 o'clock the Auklets began one by one to arrive from out to sea. They would alight among the weeds with a thud and shuffle through the stalks in a very uncertain manner, but each one seemed to know where his respective burrow was. When leaving, they generally had a hard time to gain their flight, flopping among the weeds in a most awkward way. We caught quite a number besides digging out several. The gullets of those arriving were distended with a quantity of partly digested fish for feeding the young. Out of the eleven occupied burrows dug into, four contained each a badly incubated egg with the old bird, and the other burrows young of various sizes. The burrows were two and four feet long with an eliptical nest cavity at the end, four inches in diameter. Nineteen specimens of the Cassin's Auklet were preserved. Large numbers of these birds were seen during the day off San Nicolas Island, between it and Santa Barbara Island, but no breeding colony was discovered on the former... Entire List of Water-Birds Observed. [March 26-April 4; May 11-June 9]. The party [of the second trip] consisted of Joseph Grinnell, who had immediate charge of the expedition, and gave special attention to the ornithology and entomology of the islands; Horace Gaylord, who collected mammals; and Harry Gaylord and James Brittan [Britton] who devoted their time to archaeology. The party left San Pedro harbor May 11 in a large fishing schooner... [returning June 9, 1897]”
Grinnell, Joseph The Islands of Santa Barbara, San Nicolas and San Clemente, in the Spring of 1897 Pasadena Academy of Sciences Publication No. 1, August, 1897 (26 pages).

1895-1897 Santa Cruz Island: “With much interest I read Mr. Jos. Mailliard's article on the birds of Santa Cruz Island in the May-June number of the Bulletin, and finding his experience different from mine in some particulars, I submit a few notes taken principally on the west end of the island in May, 1897. On June 5, 1895, I visited Scorpion Harbor for a few hours and landed on the square-looking rock mentioned by Mr. Mailliard. In addition to the breeding gulls and cormorants (Farallone and Baird's), there were many borrows of Cassin's Auklet which contained heavily incubated eggs or young birds...” Beck, R.H. Additional Notes on the Birds of Santa Cruz Island, Cal., 1899

1907 Santa Cruz Island: “Ptychoramphus aleuticus. Cassin Auklet. Common about Anacapa Island, and in the channel between Anacapa and Santa Cruz. Several were taken along south coast, and noted at other points.” [“At 11:30 p. m., November 19, 1907, my father (H. Linton), Mr. George Willett, and myself left San Pedro harbor in a dilapidated fishing smack and in company with a crawfisherman, one “Cold-foot” Jorgensen. We arrived off the south end of Santa Cruz Island at 10:30 the following day during a stiff norwester. For various reasons we were unable to make camp until the 22nd. It may not be amiss to state here that twice during the blow we were nearly wrecked: once while at anchor in Potatoe Harbor, a broken anchor allowing the boat to drift within the breaker line and nearly onto the rocks. In this instance the timely arrival of Willett and H. Linton in a small boat, saved the day, and incidentally the fishing smack. At another time (the engine having broken down) we were blown nearly onto the rocks of Anacapa Island; but with father at the wheel and Willett and I on the “sheet” we managed to hold her off. I mention the foregoing, and the many sleepless nights spent on the rocky shores, “running” the surf several times each day (with attendant duckings), etc., merely as a warning to those who seem inclined to believe a field naturalists ’ life “strewn with roses”. (Its ’ generally strewn with cacti!)”]
Linton, C. B. Notes from Santa Cruz Island] The Condor 10(3):124-129, May 1908