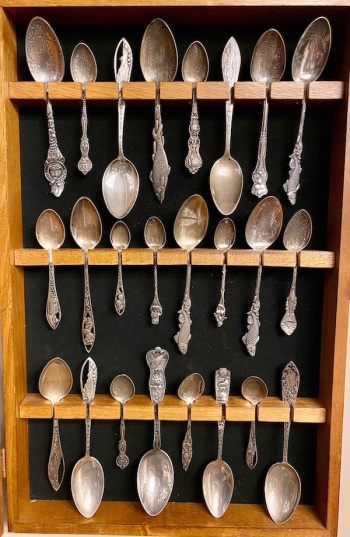 CATALINA SOUVENIR SPOONS are a world unto themselves. Expert on the subject, Dr. Harry V. Merrick, gives the following overview:

“Catalina souvenir spoons come in a bewildering variety of sizes, shapes, materials and decorations. Visitors have been taking souvenir spoons home from their Catalina excursions for more than 120 years. During this time tens of thousands, if not hundreds of thousands of spoons, must have been produced by various U.S. manufacturers, and especially more recently, by manufacturers from abroad. The earliest souvenir spoons were very likely fancy but regular sterling teaspoons and coffee (demitasse) spoons whose bowls were simply engraved with inscriptions like “Catalina Island Cal.” by entrepreneurial local Catalina jewelers and merchants. Likely, shortly thereafter, those same folks also began to produce scenes of Avalon Bay engraved on the spoon bowls. These dealers were simply taking full advantage of the emerging craze for souvenir spoons, which swept the United States beginning in the early 1890s.”

“As Catalina tourism rapidly developed in the first decade of the 20th century, and as the demand for souvenir spoons increased, the curio dealers in Avalon turned to a number of major American manufacturers to mass produce souvenir spoons to supply their needs. These included major silversmiths, including Gorham Mfg. Co, the Watson Co., Shepard Mfg. Co., C.M. Robbins Co. and the Paye and Baker firm, as well as a number of lesser well known manufacturers. Beginning about 1903 these manufacturers were responsible for producing the majority of souvenir spoons, both teaspoon and demitasse sized, until the early 1920s. From the mid 1920s, through the 1950s the Watson and C.M. Robbins firms largely dominated the production of sterling souvenir spoons, but changing souvenir spoon fashions were in the wind. Smaller demitasse size spoons in sterling, silver plate, nickel silver and even copper became increasingly popular. Both U.S. and foreign manufacturers, including Agiftcorp (U.S.A.) and Kepla Arts (Czechoslovakia) began to produce a wide variety of these smaller spoons, often decorated with enamel scenes of Avalon Bay or the iconic Casino.”

With more than five dozen named spoon types, souvenir spoons from Santa Catalina Island are known in the following:

Spoon bowls may be etched, engraved, embossed, painted or enameled.

“I have identified at least 14 different manufacturers who produced teaspoons with Catalina elements specifically designed into their spoons, (as opposed to having Catalina elements subsequently added to the spoon by engraving). My running count is that those 14 manufacturers produced over 100 different patterns with Catalina elements, even if some are only associated with Catalina via the embossed bowl scene of Avalon Bay on an otherwise common pattern, or other topically themed spoon. Most recently I have also been interested in the variety of engraved Catalina scenes found on teaspoon bowls and have been working on recognizing individual engravers and the dating of their products.

Evidence for the dating of the embossed bowl designs comes from the image recorded on the bowl itself and from the other attractions featured on the spoon, as well as from occasional monogram dates. To my experience the first embossed Avalon bowls must have appeared in the first couple of years of the 1900s. The earliest I have encountered, thus far, is Paye and Baker Type 1, which must have appeared sometime before mid-1903. Most of the embossed designs of the other manufacturers typically occur on spoons whose depicted attractions suggest design dates of 1904 or later.”