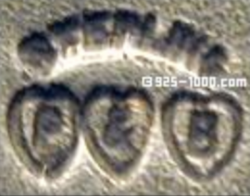 Originally Simmons & Paye (1896-1900), Paye & Baker was founded in Attleboro, Massachusetts in 1901 by Charles Thomas Paye and Frank Lee Baker. The company made sterling souvenir spoons, silver jewelry, and novelty items. In 1919 (Paye's death) the company began making dental and surgical instruments. Silver items were not made between 1919 and 1923. Paye & Baker is listed as a jewelry maker until 1952. It was out of business by the early 1960s. [Kovels.com]

The original introduction states: "This, our fiftieth catalog, is proof of our growth and progress, and our constantly increasing patronage bears witness to the general salability of our goods and the straightforwardness of our methods. Ours is an honest line of sterling silverware, and implicit confidence may be placed in the accuracy of illustrations and descriptions... This catalog is representative, but it is by no means complete, and new pieces are being added every day in the year."

Paye & Baker embossed spoon bowls known in three Types, each of which has written in the bowl: 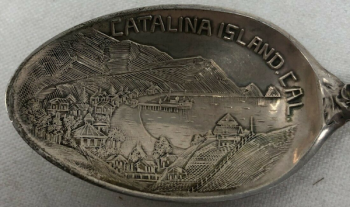 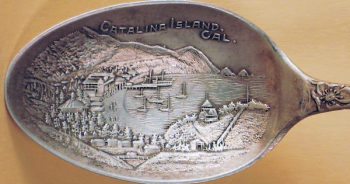 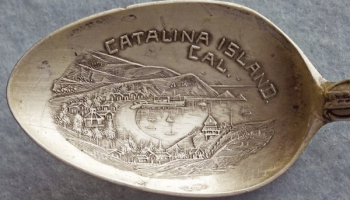 March 20, 1896 [Boston Globe]: “C. T. Paye pleads not guilty. Shepard & Co. of Melrose claim he had no right to "Impressions" taken. Malden, March 20—Charles T. Paye, who was arrested at Providence yesterday for the alleged larceny of several impressions used in connection with the manufacture of silverware from the firm of Shepard & Co. of Melrose, was arraigned before the district court here this forenoon. He pleaded not guilty to the charge of larceny, and the case was continued for trial to March 25.”

March 26, 1896 [Boston Globe]: “Was charged with larceny. Charles T. Paye of Providence will be sentenced Saturday. Malden, March 26—The case of Charles T. Paye of Providence, for the alleged larceny of impressions valued at $1000 from Shepard & Co of Melrose, was tried before the district court yesterday, and lasted nearly five hours. The evidence showed that Paye was formerly in the employ of Shepard & Co., and that when he left to go into business for himself he took some 1000 impressions, which he claimed belonged to him, as they were made by himself from paper which he furnished. Mr. Shepard testified that he furnished the paper on which the impressions were made, and that they were the property of the firm in Melrose. Peter J. McGuire represented the defendant, and argued that the impressions taken by Paye were his own, having been made from his own paper, and were part of his stock in trade as an engraver of metals. Col. Hesseltine was council for the firm, and he argued that the evidence proved that the impressions belonged to the firm, and were part of the stock of the firm. It was the first case of the kind that has been tried before this court. Sentence was postponed to Saturday. It is said that Paye will take the case to the superior court.”

November 30, 1903 [The Evening Herald, Parsons, Kansas]: “The Frisco Depot safe was wrecked. Burglers made a nice haul last night. Loss nearly $1000...The large steel safe in the Frisco depot, on South Central Avenue, was blown with a heavy charge of nitro glycerine last night...A number of other valuable packages although torn open, were not taken. One of these was a package of silverware consigned to V. R. Kniberg at Chetopa from the Paye & Baker Manufacturing Co.m of North Attleboto, Mass. It was valued at $44.75. This package was torn open and as it was a very valuable shipment the reason for it being left are not known.”

December 13, 1904 [Boston Globe]: “Walter S. Grant, a leading jeweler, died at North Attleboro, after a few hours. North Attleboro. Dec. 13—Walter S. Grant, a leading jeweler, died this noon after a few hours' illness, the result of a shock. He was 52 years of age and had been connected with the firm of Paye & Baker for many years. A wife and one son survive him. Mr. Grant was a member of Bennett lodge, United Workmen, Bristol Lodge, Freemasons, Providence Lodge, Odd Fellows, the Elks and the Fish and Game association. He was an attendant of the Universalist church.”

December 6, 1917 [The Daily Gazette]: “Refuse to deal with North Attleboro jewelers' union. North Attleboro, Dec. 5—The State Board of Arbitration and Conciliation resumed its hearing today in Red Men's Hall for the purpose of hearing evidence regarding the cause and continuance of the North Attleboro jewelers' strike. The hall was well filled with strikers and others. Charles G. Wood of the State Board presided. Judge F. S. Hall of Taunton represented the manufacturers and attorney Berack of Boston looked after the interests of the union. The following jewelry manufacturers were summoned as witnesses: Charles T. Paye of the Paye & Baker Manufacturing Company; J. J. Sommer of the J. J. Sommer Company and Fred A. Howard of the F. M. Whiting Company. Previous to the hearing Judge Hall informed the counsel for the union that his clients, 27 manufacturing jewelers, held the same position today that they did four weeks ago, and that under no consideration would they deal with the union.”

August 31, 1919 [Boston Globe]: “Chat. T. Paye dead at North Attleboro. Jewelry manufacturer was active during war. Had been vice president of Home Market Club, Boston. North Attleboro, Aug. 30—Charles T. Paye, jewelry manufacturer and one of the most prominent civic workers here, died today following an operation in a Pawtucket hospital Wednesday. Mr. Paye was born 44 years ago in Providence, and had lived here 17 years. He was president of the Paye & Baker Company, jewelers and silversmiths. Holding membership in the New England Jewelers' and Silversmiths' Association, he was chairman of the tariff and standing committees of that body. He was vice president of the Home Market Club of Boston, president of the North Attleboro Chronicle Company and a trustee of the Attleboro Savings Bank. Mr. Paye was especially active during the war. He organized the Red Cross here, and served as its first president. He was also chairman of the Public Safety Committee and took a leading part in all Liberty Loan campaigns. A member of the commission that installed the sewerage system, he also served on the Town Committee. He was a Republican. Mr. Paye was a member of Bristol Lodge of Masons, the Elks and of the Board of Trade. Besides a wife, he leaves a seven-year-old son, Carter Paye.”