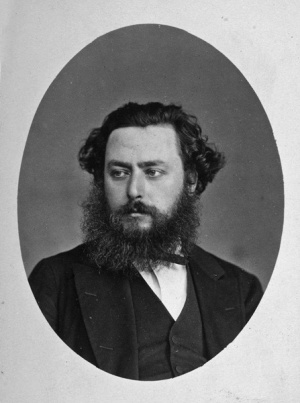 CESSAC, Leon de (1842-1891), French archaeologist who visited the Channel Islands to collect artifacts for the Ministry of Public Instruction and Fine Arts in Paris, France between 1877 and 1879. In addition to his extensive artifact collecting on Santa Cruz Island, Cessac excavated on at least four other Channel Islands (San Miguel, Santa Rosa, Anacapa, and San Nicolas islands).

When Cessac first arrived in San Francisco in 1877 and found himself without a financial backer, he learned that Santa Cruz Island “was under the control of a French wool company [Santa Cruz Island Company]. Lacking financial means, Cessac accepted an invitation to visit the island” by the company president and fellow Frenchman, Justinian Caire.

Cessac gathered at least 4000 artifacts from the Channel Islands, during which time an intense rivalry and jealousy developed between Cessac and fellow collector, Paul Schumacher who was collecting for the Smithsonian Institution. Schumacher tried to have Cessac’s collecting banned by the U.S. Senate, but was unsuccessful.

In January 1880, Cessac went to San Luis Obispo and boarded with the French Dallidet family. He proposed marriage to one of the Dallidet daughters, only to leave her standing on the altar while he returned to Paris and checked into a boarding house. By September 1881, under threat of debt-collectors, Cessac left the boarding house in Paris and disappeared without paying his bills. After some time, he was thought to be dead. Some ten years later, a French historian noted a death certificate for Jean Francois Armand Leon Cessac, age 49, dated February 14, 1891.

The majority of Cessac’s archaeological collections from the California Channel Islands went to the Musée de l’Homme in Paris. A small portion of them went to Rijksmuseum voor Volkenkunde in Leiden, Netherlands.

[NOTE: In an interview by J. P. Harrington of Arthur Caire, he said Joyaux had a photo of Cessac excavating on SCI!]

March 22, 1877 [SBDP]: “It is stated that a French war vessel will soon touch at Santa Cruz Island, off our coast, to land Professor A. Pinart, who is sent by his government to make an exploration of the island in the interest of science.”

September 4, 1877 [SBDP]: “Mons. De Cessac, a noted French philosopher and savant, arrived here last evening. He arrived at San Francisco in company with Mons. A. Pinart, on board the French man-of-war Magicieme. Mons. Pinart will arrive here in the course of the week. They are sent out by the French government to investigate the geology, etc., of Santa Cruz Island and the adjacent islands, and it is very probable that they will make a thorough examination of the Santa Ynez range of mountains. Mons. De Cessac will leave for the island on Thursday next by the schooner Star of Freedom. Their researches are expected to occupy from two to three months.”

April 30, 1878 [SBDP]: “Santa Cruz Island. Researches of a French savant in the island. Lecture of Mons. L. de Cessac, yesterday, before the Santa Barbara Society of Natural History. Mons. de Cessac excused himself from addressing the society in English, he having been only a few months in America. He commenced by referring to the acquisition of California by the United States a quarter of a century ago, and the glorious achievements of her citizens. The mission entrusted to him by the French government had principally for its aim the study of the volcanic phenomena and the anthropology of the western coast of North America. The island of Santa Cruz and the neighboring islands of the California archipelago were the first course in his field of investigation… Afterwards he will go to study Arizona, Colorado, Central America and the various states of South America on the Pacific. His present purpose was simply to entertain the society with his researched in Santa Cruz Island. The savant opened with a rough sketch of the island, indicating the geological formations…”

October 25, 1879 [SLOT]: “Prof. De Cessac, the eminent French scientist who has for some time been exploring this coast in the case of science, will shortly return to France. He expects to visit California again in the near future.”

November 11, 1879 [SBDP]: “The Star of Freedom arrived during the night from the islands, after supplies. On her return trip she will take Mons. Cessac, who goes after a collection of skulls and other Indian remains and relics which he has dug from the Indian mounds on the islands. The captain of the Star of Freedom reports that it blew a tremendous gale at Santa Cruz Island on Sunday night.”

November 15, 1879 [SBDP]: “The schooner Star of Freedom arrived from the islands this morning, having on board the bones and other Indian relics and curiosities found there by Mr. Cessac.”

November 21, 1879 [SBDP]: “The Senator took away six tons of Indian bones and relics gathered in this neighborhood. They will be sent to France to a historical and scientific society for which they have been collected by M. Cessac.”

February 8, 1880 [NYT]: “Old bones of the past… There must have been over 1,000 different objects in one of the rooms of Mr. G. L. Fenardent’s museum. Then M. Leon de Cessac, a gentleman who has been sent on a scientific mission to California by the French Minister of Instruction, smiles and says: ‘you might guess forever and find out the use of that bone, or those bones, for there are hundreds of them. I never would have known what it was but for an Indian who explained it…In determining the use of almost all these objects, the Indians themselves, those who are now alive, have been my teachers… My most important explorations were those made on the California coast, on the islands of San Miguel, Santa Rosa, Santa Cruz, Anacapa and San Nicolas, and all along the coast from San Buenaventura to Monterey… My collection, a certain part of which is on its way to France, consists of some 5,000 specimens. They will go to the Ethnological Museum of the Trocadero in Paris. These islands off the California coast, now quite deserted, must have been once alive with people. On Santa Cruz, the largest island some 25 miles long, I have discovered the dwelling places of at least 500 families… M. de Cessac left for France this week, with the intention of returning very shortly to this country, when further explorations are to be made by him in Lower California for the French Government…”

October 16, 1881 [NYT]: “Man’s early handiwork. Primitive Industry; or Illustrations of the Handiwork in Stone, Bone and Clay of the Native Races… Charles C. Abbott is to be highly commended for the infinite pains he has taken in the study and description of the innumerable typical specimens of aboriginal or Indian work which have passed through his hands…In the chapters on totems and bird-headed stones, Mr. Abbott introduced carved stone… M. de Cessac brought from the Pacific coast an endless variety of such totems. Sometimes the first form had been so thoroughly lost in the copies that it required a whole series of earlier stones to even trace a meaning…”