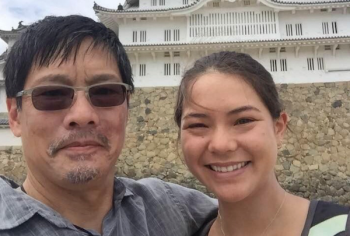 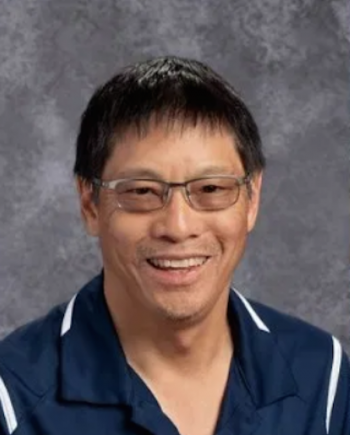 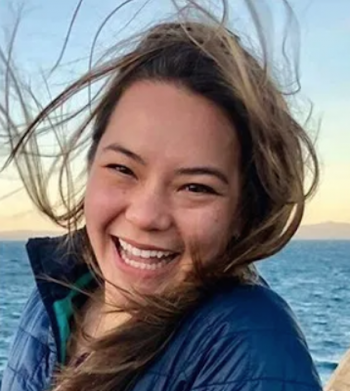 Scott and his daughter Kendra bonded over diving. He was a Silicon Valley engineer turned physics high school teacher in Fremont, she was a UC Davis alumna and biologist with the U.S. Fish and Wildlife Service in Ventura. The duo was passionate about diving and took at least two dive trips to the Channel Islands per year and had previously traveled on Conception. "Kendra’s fascination with marine ecology will continue to inspire everyone she touched," wrote Chancellor Gary S. May of UC Davis. “Mr. Chan was a beloved teacher at AHS among students and colleagues,” American High School representatives said in the statement. “His students knew him to be an innovative and inspiring teacher who developed a passion for physics among his students. His loss is a tremendous tragedy for our school district." Scott, 59, and his daughter were from Los Altos, California. Kendra was 26 and was living in Oxnard at the time of the accident.

September 4, 2019 [Marin Independent Journal]: “Raymond Scott Chan and Kendra Chan. A Los Altos resident who had worked as a physics teacher at American High School in Fremont for about three years, was on board the Conception with his daughter, according to a Fremont Unified School District spokesperson. The school made an announcement to staff and students on Tuesday and said a crisis intervention team will be on campus throughout the week. Charles McKinven, the store manager at Pacific Scuba Divers, a dive shop in Sunnyvale, said Chan was a regular customer there. “Scott himself had probably been in the shop here as recently as back in May/June time frame,” McKinven said Tuesday when reached by phone. He said Chan was a certified diver and would come in for additional equipment and accessories. The cover photo on Chan’s Facebook profile page showed him diving near Santa Cruz Island. Chan’s daughter was identified by KTVU as 26-year-old Kendra Chan, who worked as a biologist with the U.S. Fish and Wildlife office in Ventura, California.”

September 7, 2019 [KTLA]: “A Labor Day diving excursion through the Channel Islands ended in tragedy when flames swept through the boat as 33 divers and a crew member slept below deck. The fire quickly engulfed the boat, killing all aboard the Conception, except for five crew members who who were awake on the main deck and managed to escape the blaze before the dive vessel sunk off Santa Cruz Island. U.S. Fish and Wildlife Service biologist Kendra Chan and her father were among those killed in Monday’s fire, authorities said. On Saturday, the agency’s officials said they were “devastated” by the loss of 26-year-old Chan and her father. “It is with inconceivable sadness that we share today the passing of one of our own,” U.S. Fish and Wildlife Service said. “We’re devastated by this heart-breaking news and our thoughts remain with her loved ones during this unimaginably difficult time.” The wildlife agency described Chan as a “remarkable human being” whose “positive energy enriched the lives of those she touched through her love of nature, wildlife, and the outdoors.” “She was a force for good, and led a life that made the world around her a better place. She loved the ocean, from surfing and diving to tide pooling. Her passion, curiosity, and enthusiasm for all living things – from tiny skeleton shrimp to the tidewater goby – were infectious. We will miss her dearly, and will carry her energy with us in the days ahead,” the agency said. Authorities on Friday released 22 names of the 34 victims killed in the fire, revealing they all likely died from smoke inhalation. The victims were identified as: Carol Diana Adamic, 60, Tia Salika-Adamic, 17, and Steven Salika, 55, all of Santa Cruz; Angela Rose Quitasol, 28, Evan Michel Quitasol, 37, Michael Quitasol, 62, all of Stockton; Nicole Storm Quitasol, 31, of Imperial Beach; Neal Gustav Baltz, 42, and Patricia Ann Beitzinger, 48, both of Arizona; Marybeth Guiney, 51, and Charles McIlvain, 44, both of Santa Monica; Daniel Garcia, 46, and Yulia Krashennaya, 40, both of Berkeley; Wei Tan, 26, of Goleta; Caroline McLaughlin, 35, of Oakland; Raymond “Scott”Chan, 59, of Los Altos; Kendra Chan, 26, of Oxnard; Ted Strom, 62, of Tennessee; Vaidehi Campbell, 41, of Felton; Andrew Fritz, 40, of Sacramento; Justin Carroll Dignam, 58, of Anaheim and Alexandra Kurtz, 26, of Santa Barbara. “This list is representative of the diverse makeup of the passengers and crew who were aboard the Conception on that fateful day,” Santa Barbara County Sheriff Bill Brown said at a Friday news conference. “They were from our local area and from throughout California, from across the United States and from around the world. Their tragic loss has devastated countless family members, loved ones, friends and colleagues.” Authorities were still working to contact the families of the rest of the victims that have not been officially identified. The victims included scientists, nurses, students, a photographer, a teacher and government employees. Some were family members. One mother said she lost three daughters in the fire. And a 17-year-old celebrating her birthday was killed in the fire along with her parents. DNA analysis was used to identify the victims because of the varying degrees of burns suffered from the intense flames, according to the sheriff. Grieving families of those killed came from California, Arizona, Tennessee and as far away as Singapore, Japan and India, authorities said. The investigation into what caused the fire was still underway Saturday and officials were working to retrieve the boat and find one of the 34 bodies that still hadn’t been recovered.”

September 16, 2019 [Berkeleyside]: “Remembering Scott Chan and his daughter, Kendra Chan, who died in a tragic boat fire. Scott Chan, 59, and his daughter Kendra Chan, 26, lost their lives in the Conception diving boat tragedy on Sept. 2. Extinguished too early on earth, they have left behind a legacy of curiosity, adventure, and devotion to the natural world. Scott Chan grew up in Berkeley and attended Stanford University where he earned his B.S. (1981) and M. Sci (1982) in electrical engineering. He met his wife Vicki Moore at Stanford, and they married in 1984. They shared an interest in art and other cultures, and Scott brought adventure to Vicki’s life in the form of biking, skiing, scuba diving, and travel. An engineer at heart, Scott was fundamentally interested in machines, which led to his appreciation of all things fast – learning about planes and WWII, amateur bicycle racing and Sunday morning rides with his cycling group, and racing cars at local racetracks. After 20 years as an electrical engineer in Silicon Valley, Scott switched gears to become an AP physics teacher. His greatest satisfaction was helping his students understand a subject he loved, and his innovative teaching style inspired many of them to pursue degrees in science. Summers were spent traveling with his family and furthering scientific research – at Stanford’s particle physics lab and most recently this year, diving and cataloging reefs to further ocean conservation in Timor-Leste. Scott was very dedicated and serious – which made his deadpan jokes and comic antics, both inside the classroom with silly props and at home with droll comments, all the more hilarious and special. Kendra joined the world in 1993 and was immediately introduced to nature by tagging along in her parents’ backpacks and bike seats. She first visited the Monterey Bay Aquarium as a toddler, and never outgrew her fascination with fish and marine life. While earning her B.S. in Evolution, Ecology, and Biodiversity (2015) at UC Davis, she spent two summers at the Bodega Bay Marine Lab. After graduating she worked for the Marine Science Institute and then the US Fish and Wildlife Service, championing endangered species and infecting others with her curiosity and enthusiasm for our planet’s diversity of life – from the underappreciated eelgrass to the enormous mola mola. Her uncommon patience led her to spot lifeforms others would miss, whether peering between rocks in the intertidal zone, trekking through the forest, or scouring mountain ranges. Kendra cultivated an amazing group of close friends and family who will never forget her passion for all living things (and garlic bread!), how she surrounded herself with blue and the ocean, her infectious laugh, and her love of adventure. It was on one such father-daughter adventure that Scott and Kendra left us: wife and mother Vicki Moore, son and brother Kevin Chan, and Scott’s parents Ida and Ray Chan, sisters Barbara and Marsha (Terry), siblings-in-law Lissa, Debbie (Bill), Bud (Rosie), Doug (Joy), and Kendra’s cousins Tara (Andy), Tamara, Tiffany (Drew), Rain, Bryan, Keiashia, and innumerable other loving family and friends. Scott and Kendra lived life to the fullest, not just for themselves, but in service to others and the natural world. For those wishing to honor their lives, donations to the Chan-Moore Legacy Fund on GoFundMe will benefit the California Academy of Sciences, Monterey Bay Aquarium, and Ocean Conservancy.

October 15, 2019 [Los ALtos Town Crier]: “Friends and family of Scott and Kendra Chan – the Los Altos father and daughter who died when a commercial diving boat they were bunking on for a weekend trip caught fire off the Santa Barbara coast last month – gathered at the California Academy of Sciences in San Francisco Saturday to honor lives cut short. At approximately 3:30 a.m. Sept. 2, the Coast Guard and partnering agencies responded to a vessel fire off the north shore of Santa Cruz Island near Platt’s Harbor in Santa Barbara County, a memo from the Santa Barbara County Sheriff’s Office reported. By the time authorities arrived on scene, the 75-foot Concepcion was fully ablaze. It sank to the ocean floor just under four hours later, claiming 34 victims. The Chans were among several passengers on board with ties to the Bay Area. Scott Chan, 59, taught physics at American High School in Fremont. Daughter Kendra, 26, who graduated from Mountain View High School and UC Davis, was a biologist who lived in Oxnard. Scott was remembered as a beloved teacher who used innovation to inspire his students, according to a statement from his employer, the Fremont Union School District. Kendra’s Mountain View High band director Jason Kneebone described his former student as outgoing, talented and passionate, with an “infectious positivity.” The father-daughter pair were on a trip doing what they loved most at the time of their deaths: scuba diving. During a FaceTime call with a local television station after the tragedy, Scott’s wife and Kendra’s mother Vicki Moore said they took two diving trips to the Channel Islands every year and had been aboard the Conception before – it was how they bonded. Moore’s niece Tamara Moore, who organized the family’s GoFundMe page to raise funds for causes Scott and Kendra supported, spoke at the memorial and expressed her gratitude on the GoFundMe page on Monday (Oct. 14). “We learned more and more about this multifaceted and adventure-seeking father/daughter duo,” she said. “We know Scott and Kendra are looking down on us and are so touched by the generosity from all of the individuals who have made this campaign possible.” The Chan-Moore crew, including Vicki, son Kevin and their extended family, set up the fundraiser in Scott and Kendra’s names to benefit nonprofit ocean conservation organizations. All proceeds, more than $43,000 to date, will be donated to the Monterey Bay Aquarium, the Ocean Conservancy and the California Academy of Sciences.”