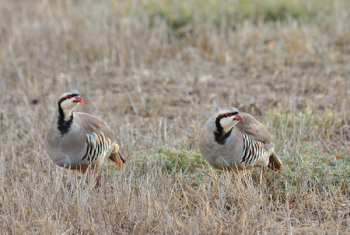 CHUKAR (Alectoris chukar) were introduced to San Nicolas Island in 1968 by a group of men stationed on the island. They thought hunting chukar would be a nice past time. About 85 birds were obtained from the California Department of Fish & Game and released on the island. Within a few years, the population had grown sufficiently, and the men asked the commanding officer if they could start hunting the, The answer was “no”. Issues with transportation of hunting weapons, use of radar, etc. complicated the issue.

Thus the chukar have continued to live in peace and multiply on the island. Today their population numbers in the thousands.

1984 San Clemente Island: “Gambel's quail (Lophortyx gambelii) and the exotic chukar (Alectoris chukar) have been introduced and are thriving.” Recovery Plan for the endangered and threatened species of the California Channel Islands published by U.S. Fish & Wildlife Service, Portland, Oregon 1984.