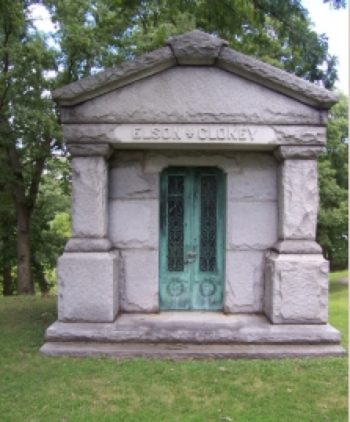 CLOKEY, Ira Waddell (1878-1950) Illinois-born mining engineer and later Colorado and California botanist whose plant collections are at the University of California at Berkeley. He made two collecting trips to Santa Cruz Island in the 1930s, and his checklist added 41 plant taxa previously unpublished. The endemic Island nightshade found on Santa Cruz and Santa Rosa islands, Solanum clokeyi, is named in his honor.

January 1950 [Decatur Review]: “Ira CLokey dies in west. Ira W. CLokey, 77, botanist, mining engineer and real estate man, formerly of Decatur, died last week in California where he made his home. The body will be returned for services in the family mausoleum at 11 a.m. Wednesday in Greenwood Cemetery. The Dawson and Wikoff Funeral Home will be in charge. He left here in 1924 to move to Long Beach, Calif., where he was a botanist. A graduate of the Harvard School of Mines, Mr. Clokey served seven years as a mining expert in Mexico and Colorado. He returned here in 1924 and laid out the Elms, a real estate development in the north part of the city. His father was Col. Josiah M. Clokey, real estate man and lawyer who made gifts of land to the city for use as parks, boulevards on East Main Street and East Prarie Avenue were laid out by him. Clokey Park is on East Main Street. Mr. Clokey leaves his wife, Eleanor and two daughters, Caroline and Eleanore.”